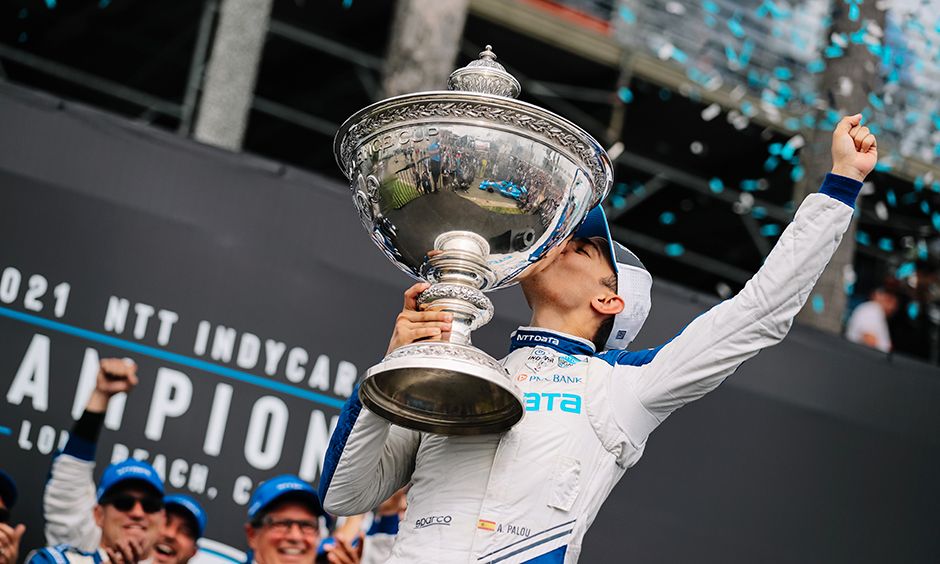 This is his first season with the powerhouse team in the No. 10 NTT DATA Chip Ganassi Racing Honda, joining CGR after his rookie season in 2020, when he finished 16th in the standings. “What a race, what a year, what a season,” Palou said. “This team is amazing. I’m super proud to be a part of Chip Ganassi Racing, all our partners. I’m super proud to be a champion and for the opportunity these guys gave me. Dream completed. Let’s get another one now.”

In the most definitive sign of the youth movement this season in the series, Palou, 24, is the first NTT INDYCAR SERIES champion younger than 25 since current teammate Scott Dixon in 2003. Palou is the seventh-youngest champion in INDYCAR SERIES history. Herta, who led all three practice sessions this weekend, beat Josef Newgarden to the checkered flag by .5883 of a second in his No. 26 Gainbridge Honda to finish the season with two consecutive victories and three overall in 2021.

Herta rebounded from starting 14th after hitting the wall in NTT P1 Award qualifying. He swept both races in his native California this season and won for the first time at his home race in Long Beach, which he attended since childhood to watch his father and current strategist, Bryan Herta, race in the INDYCAR SERIES.

Six-time series champion Scott Dixon finished third today in the No. 9 PNC Bank Grow Up Great Honda, 1.3368 seconds ahead of champion teammate Palou. 2016 series champion Simon Pagenaud rounded out the top five in the No. 22 Menards Team Penske Chevrolet. Herta, who grew up in Valencia, just 60 miles north of Long Beach, took the lead for good on Lap 64 of the 85-lap race on the streets of Long Beach.

He led a race-high 43 laps and was quick on both the Firestone “black” primary tires and “red” alternate tires. That ability to find speed and traction on both tire compounds was vital for Herta. He started 14th on the alternate tires, staying on that rubber compound after his first pit stop, too.

So, INDYCAR rules mandating that each driver must use both compounds during the race forced Herta to switch to the slower but more durable primary tires for his last stint on track, while Newgarden and other pursuers already had used primary tires earlier in the race and were on the faster but less durable alternate tires for their run to the checkered flag.

Herta had built an 8.8-second lead on his final stint on the alternate tires before pitting on Lap 55 for primary tires. Newgarden jumped into the pits on the same lap for alternate tires and began cutting into Herta’s lead almost immediately. Newgarden also caught a break on Lap 62 when Oliver Askew’s No. 45 Hy-Vee Honda nosed into the tire barrier in Turn 9 after contact with Conor Daly’s No. 20 U.S. Air Force Chevrolet while dueling for position. That triggered the fourth and final caution period of the race, bunching field for a vital restart on Lap 65 with Herta in the lead and Newgarden second.

Herta, on primary tires, appeared vulnerable to losing the lead on the restart to Newgarden, on grippier alternate tires. But Herta rocketed away at the start of the restart zone and got superb traction exiting the famous hairpin corner leading to the front straight and green flag, while Newgarden’s car lost grip exiting the hairpin.

But Newgarden refused to give up, showing the resiliency of a two-time series champion. He continued to shave the gap every lap, pulling to within .680 of a second with eight laps to go. Herta and Newgarden raced in accordion fashion around the 11-turn, 1.968-mile circuit, with Herta – who was running less downforce on his rear wing than Newgarden – building his lead on straightaways and Newgarden taking advantage of more grip to cut that deficit in tight turns.

Newgarden pulled to within a car-length or two of Herta late in the tight, treacherous fountain turn complex. But the gap grew on the straights due to less drag on Herta’s rear wing, and he was able to hold on for victory. The runner-up finish helped Newgarden jump to second in the final championship standings, 38 points behind Palou.

Pato O’Ward, who entered the race 35 points behind Palou in second, ended up 62 points back in third after a disappointing day. O’Ward’s No. 5 Arrow McLaren SP Chevy was hit from behind by the No. 18 SealMaster Honda of Ed Jones and spun in the hairpin turn at the end of Lap 1, dropping him to the rear of the field. That contact led to a loss of drive on Lap 19 after the half-shaft in his right rear wheel snapped. O’Ward returned to the track on Lap 53 after extensive repair time but dropped out when it became apparent second place in the championship was out of reach. He ended up in 27th place.