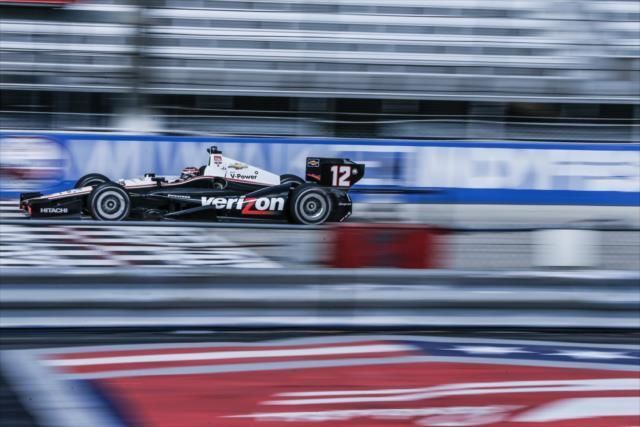 Will Power converts his P1 Verizon Award to a victory on the ABC Supply Wisconsin 250 at the Milwaukee Mile. His teammate, Juan Pablo Montoya finished second, and Tony Kanaan puts his Target Chip Ganassi car in the last podium position.

The ABC Supply Wisconsin 250 at the Milwaukee Mile starts with will Power and Tony Kanaan at the front row.  Power kept the first place when the first lap was completed, Kanaan was second and Montoya third. Ryan Briscoe running in that moment on fourth place completed a top 4 Chevy cars.

At lap 31, the leader of the race, Will Power had started to double some drivers from the back of the field.

At lap 50, Power led the race followed by Kanaan, Montoya, Briscoe, Newgarden, Castroneves, Carpenter, Kimball, Andretti and Dixon. Simon Pagenaud was the first of the race to change the tires. Then Hunter-Reay, Hawksworth, Muñoz and all the following drivers had stop in the pits. The leader of the race stopped at lap 57, and a lap later Monotya stops at pits having a contact with his new tires to change. Ed Carpenter was the last driver to change his tires.

Power continues in the leading of the race but Kanaan had battle so hard for that place, with nothing to do because the Team Penske driver had defend from outside. Briscoe took third place after Montoya pit problem. Castroneves was fifth followed by Hunter-Reay already on sixth place.

Carlos Huertas seems to have some mechanicals problems but the Houston Race 1 winner, kept in the track. Castroneves had lost his fifth place after being overtaken by Hunter-Reay and Newgarden.

Pagenaud was once again the first to do the second stop. This time, Power was the last driver to change his tires. Even this Championship leader had a good pace, but at lap 120 his tires goes down and he stops rapidly, and Kanaan took the leadership of the race by two seconds over Power, 5 seconds behind of Power was Briscoe on third place and Dixon on fourth.

At lap 131 the first caution came out after a contact of Carlos Muñoz into the barrier.  Power, Newgraden and Andretti when the pit were open they didn’t stop like the other drivers. Thus means that Power came back to the leadership of the race followed by Newgarden, Andretti, Kanaan, Montoya, Dixon, Briscoe, Castroneves, Pagenaud and Bourdais.

The green flag come back at lap 140; Kanaan quickly came back to second place, and Montoya also come back to the last podium place after overtook Newgarden at lap 147.

At lap 168, Hunter-Reay running in 11th place, had a mechanical and had to retire of the race and it hurts for his championship hopes for the Indy 500 winner.

At lap 183 Josef Newgarden was the first to do the following tire change. Power stops 7 laps later, Kanaan on 190 lap, and Montoya on a lap later of Kanaan.

So, Power kept on the lead, Newgarden took second place and Montoya third after last pit stop. Kanaan was fourth.  With 48 laps to go Montoya overtook Newgarden for second place, but Power had a big distance to kept leading the race.

Newgarden can’t have saved his tires to until the end, and he stop in the pit when only 14 laps remains. The Indianapolis driver then attacks as much as he could and he reach a finally fifth place.