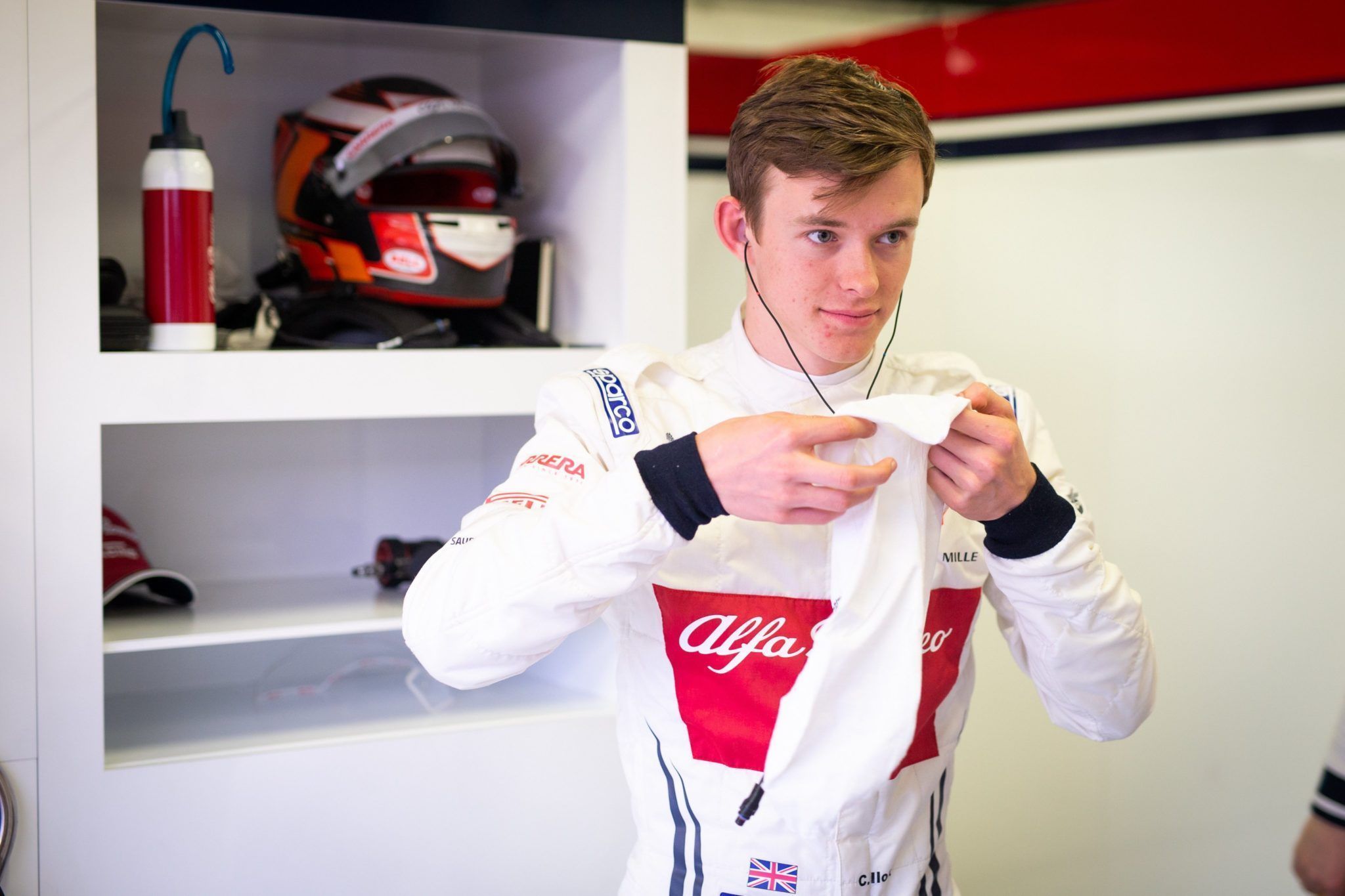 Having missed out on a FP1 run in a rain-soaked Nurburgring round, Ferrari Driver Academy’s Ilott has been handed a test run with Alfa Romeo during the Young Drivers’ Test at Yas Marina circuit in Abu Dhabi, post the 2020 F1 season.

Ilott will drive the C39 – possibly on December 15, as he makes a return to Alfa Romeo after a test run with them in 2019. “I am really looking forward to being in the car again in Abu Dhabi and I am grateful to Alfa Romeo Racing ORLEN and the Ferrari Driver Academy for this opportunity,” said Ilott.

“Any chance to drive a Formula One car is important: it’s a way to grow my experience, not just in the cockpit, but also working with the team: the engineers and crew are among the best in the world and there is so much to learn from them, so I am going to make it count.”

Team principal Frederic Vasseur added: “Callum Ilott is one of the most promising young drivers coming through the ranks, as his performance in F2 has shown this year. He was unlucky to miss out on a chance to show his ability last month, when FP1 was called off at the Nürburgring, so he thoroughly deserves his outing with the team in Abu Dhabi.

“His attitude and work ethic have left a very positive impression with the team when he tested with us last year and testing with him in Abu Dhabi is something we are really looking forward to.”

As noted above, Ilott is fighting against Mick Schumacher for the 2020 F2 title, which will be decided during Bahrain’s double-header. While the Brit gets a F1 test chance, it is seemingly unlikely that he will get a full-time drive in 2021.

Schumacher is linked to join Haas in 2021 alongside F2 rival Nikita Mazepin, leaving Ilott and also Robert Shwartzman at the sidelines. It remains to be seen what comes next for the British racer, where he can certainly take up a reserve role.

UPDATE: Moments after the announcement of Alfa Romeo, Ferrari announced Shwartzman and simulator driver Antonio Fuoco as their drivers for the Young Drivers’ Test on December 15 – both had their seat fit earlier on Thursday.

Ferrari had initially announced Shwartzman for a FP1 session in Abu Dhabi but the Nurburgring washout meant, they are forced to change its plan as the Russian will get his first chance in the current F1 car in the Young Drivers’ Test now.

He will be joined by simulator driver Fuoco. “It’s exciting to know that I will be driving the SF1000 in Abu Dhabi immediately after the end of the Formula 1 season,” said Shwartzman. “I was able to try the SF71H at Fiorano at the end of September and it was incredible, even though that car is almost three years old now.

“I can’t wait to jump into the 2020 car and get out on track alongside so many of the drivers I’ve been racing against in Formula 2. I plan to enjoy every single minute of this great experience.” Meanwhile, Fuoco added:

“I’m very happy to get back behind the wheel of a real car, having done so many virtual laps in the SF1000 in the simulator. It’s very useful for someone in my position, to be able from time to time to get into a car and check the correlation between the tools I usually use and how the car actually behaves on track. On top of that, it’s an honour to put on the red race suit and drive a Ferrari on track, a feeling that is always hard to put into words.”

Following the decision of Edwards to leave the Channel 4 F1 commentary role, Whisper TV has announced the hiring of, Jacques, as his replacement for the 2021 season alongside former racer David Coulthard, who will continue in his role for another season.

Jacques is currently the lead F1 TV, F2, F3 and F1 ESports commentator. It is unclear if he will continue his work alongside Channel 4 but a tweet from Will Buxton suggests that he is unlikely to stay. “I’m delighted to join the Channel 4/Whisper F1 team,” he said.

“As an avid Formula 1 fan since the age of 9, I know how much the broadcast means for everyone’s weekend. It will be hugely exciting to share races with so many fans and join a team which commands such respect in F1 and TV circles alike. I can’t wait to get started in 2021.”

At the same time, John Curtis, F1 Programme Editor, C4F1/Whisper, added: “Once we knew Ben was stepping down, Alex was our first choice. He is an outstanding talent and his knowledge is exceptional. Lead commentary is such an important role for the production and I have no doubt that Alex will deliver for both our current fans, as well as new ones.

“His passion and enthusiasm for the sport shines through on air and will work well with David’s excellent analysis and opinion. It’s great to be able to confirm that he’s joining the C4F1 team for the potentially record-breaking 2021 season.”

I’ve loved the rare occasions I’ve been able to grab a microphone and join @AlexJacquesF1 in the commentary box. He’s been a massive part of the F1 family and he’s made the PLC. Going to miss working with him. A lot. But so exceedingly happy for him. He deserves this so much.

Here’s news from Williams on the F1 test