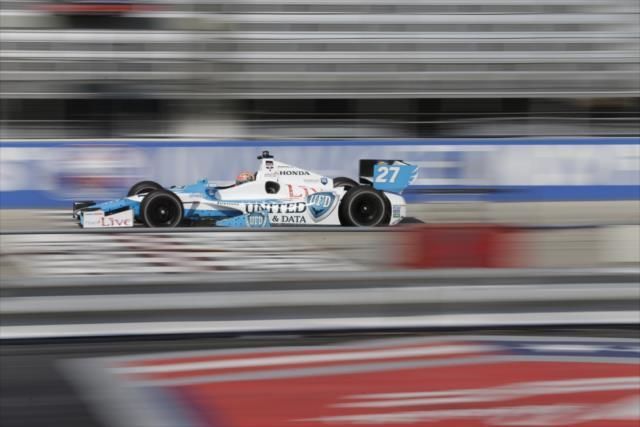 James Hinchcliffe set the fastest time of the afternoon practice session at the Milwaukee Mile on Lap 4 at 165.677 mph (22.0549 seconds), but jeopardized his participation in single-car qualifications 2 hours, 30 minutes later when the No. 27 United Fiber & Data car made contact with Turn 2 SAFER Barrier on Lap 30.

“I just went in there behind Helio (Castroneves) and we’d just made a change and the car was actually feeling pretty good,” said Hinchcliffe, who also was fastest in the 60-minute morning session. “It hadn’t really made any sort of signals that we were loose mid-corner. If anything you’re battling understeer at that point. It just kind of went around. It was a pretty slow rotation – it wasn’t a quick snap. There’s no reason to think anything broke. I feel bad for the boys – obviously the car’s quick, so hopefully we’ll get it sorted for qualifying.”

Hichcliffe, who has an average finish of 4.67 in three starts at the Mile, enters the ABC Supply Wisconsin 250 at Milwaukee IndyFest off a season-high third place Aug. 3 at Mid-Ohio Sports Car Course.

Qualifications are at 6 p.m. (ET). Live streaming video, augmented by real-time Timing & Scoring and the IMS Radio Network broadcast with Paul Page, is on IndyCar.com. The 250-lap race is at 3 p.m. (ET) Aug. 17 on NBCSN.

Before the session, team officials confirmed that Ed Carpenter Racing and Sarah Fisher Hartman Racing would merge for the 2015 season. Details will be provided by the teams Aug. 17.