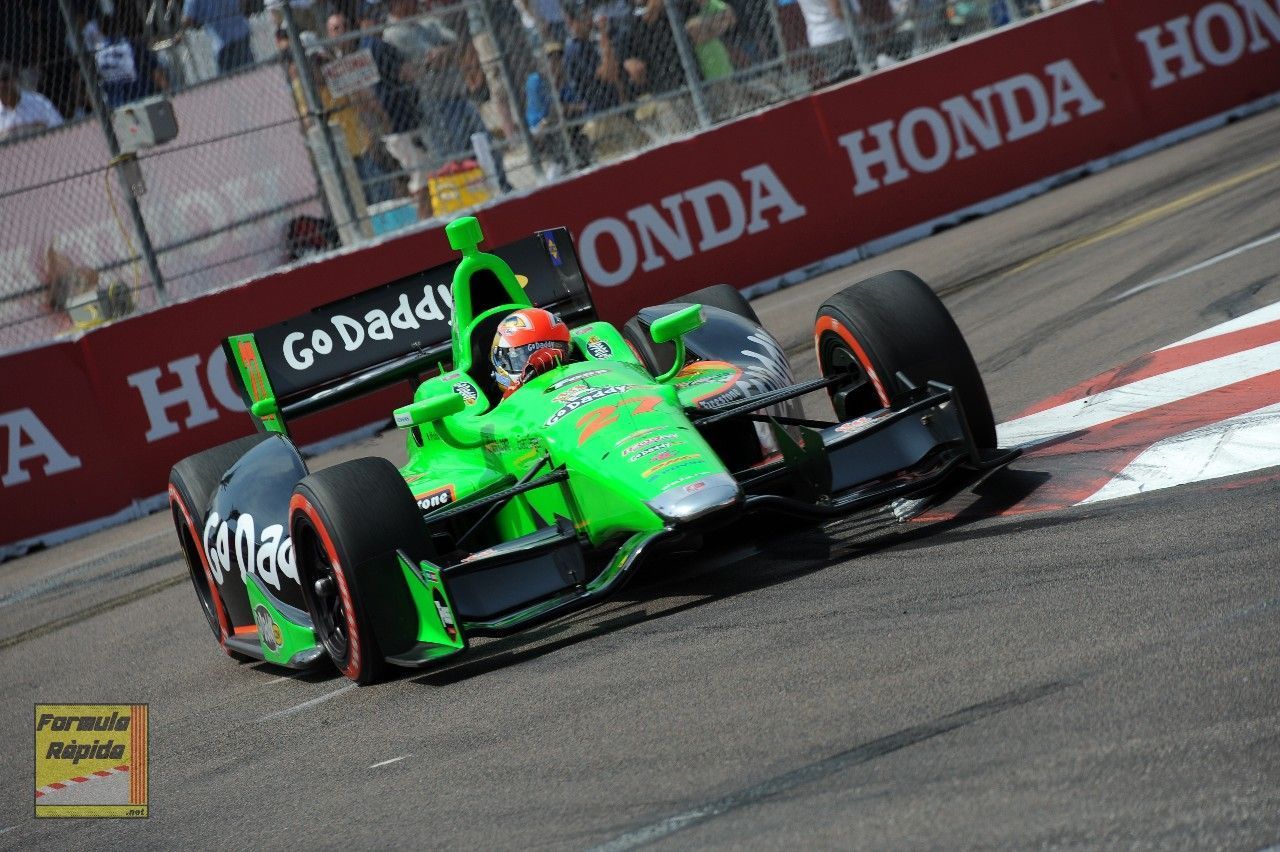 Welcome St. Petersburg circuit, it is a cloudy and windy day and 22ºC. First race from a total of 19 races. We are going to leave doubts in this race about the small diferences between all drivers, strongest drivers during all weekend have qualified in top6. Will Power has driven very safety skills and agresive driving during the practices with a good driving skill with the wheel. Takuma Sato with the first Honda single seater has get to qualified this motors into top 6 with the rokkie driver Tristan Vautier too. Third position is for Simona de Silvestro who is very supported by all fans she will try to get her first time ever victory. Hunter Reay current championship is 8th in the row and he has been the fastest driver in warmup, he is a very difficult driver to get the victory. Biggest problem for the drivers during all weekend long has been warming up front wheels in the weekend setup

With the qualified rows and after Start your Engines ceremony so famous in american races the race has started, after the first corner without any problem for drivers clasification was like this: Power, Sato, Hinchliffe, Castroneves, Silvestro, Vautier, Andretti, Kanaan, Franchitti, Hunter Reay.

Power has taken advance while the other drivers were behind Takuma Sato. As highlights Tony Kanaan start who won 4 places starting from 11th

First caution was after Dario Franchitti crash, diferences where again to zero. Helio Castroneves got the first position and he could stay there until the new caution where firts drivers got into pit lane. Oriol Serviá stayed on track and he got the first position he was leading during 10 minutes when the positions became real again (55lap)  Castroneves, Hinchtown, Power, Vautier y Simona en cabeza. At this moment most of drivers had spent all the push to pass allowed in the race

Mistakes were one by one and yellos flags appeared more times, mechanical problems appeared too as well. After 85lap Hinchcliffe got the first place and he would stay there until the end of the race winning his first race in Indycar ever.

Finally in las laps there were some fights. A duel between top2 Hinchcliffe got to let Castroneves (3 times winner here) in back during more than 20 laps. Castroneves couldnt wint Hinchcliffe and he arrived just one second of diference. Simona  de Silvestro was fighting and confortable in 3rd position as well Kanaan in 4th position but Andretti was pushing so hard during last 5 laps and he got the 3rd position overtaking both. Even Andretti has touched Simona´s car sometimes during this las 3 laps. Lot of emotions until the end at St. Petersburg circuit. Finally Simona in the last lap has made a mistake in braking point the last lap  and she got 5th and in the last laps she had problems with tyres so much degradation, she was 6th in the last meter in a photofinish ending. Anyway it was a big and awesome weekend for the switzerland

This is the race results

it has been a very long race, 2 hours and a half where there was a lot of overtakes during every corner in every lap, an amazing race with a lof of attacks and defence movements. A big show until the last meter and great performance for all drivers. It is expected amazing races during whole this year. Next round will be on 7th of April in Alabama which we will follow from www.formularapida,net