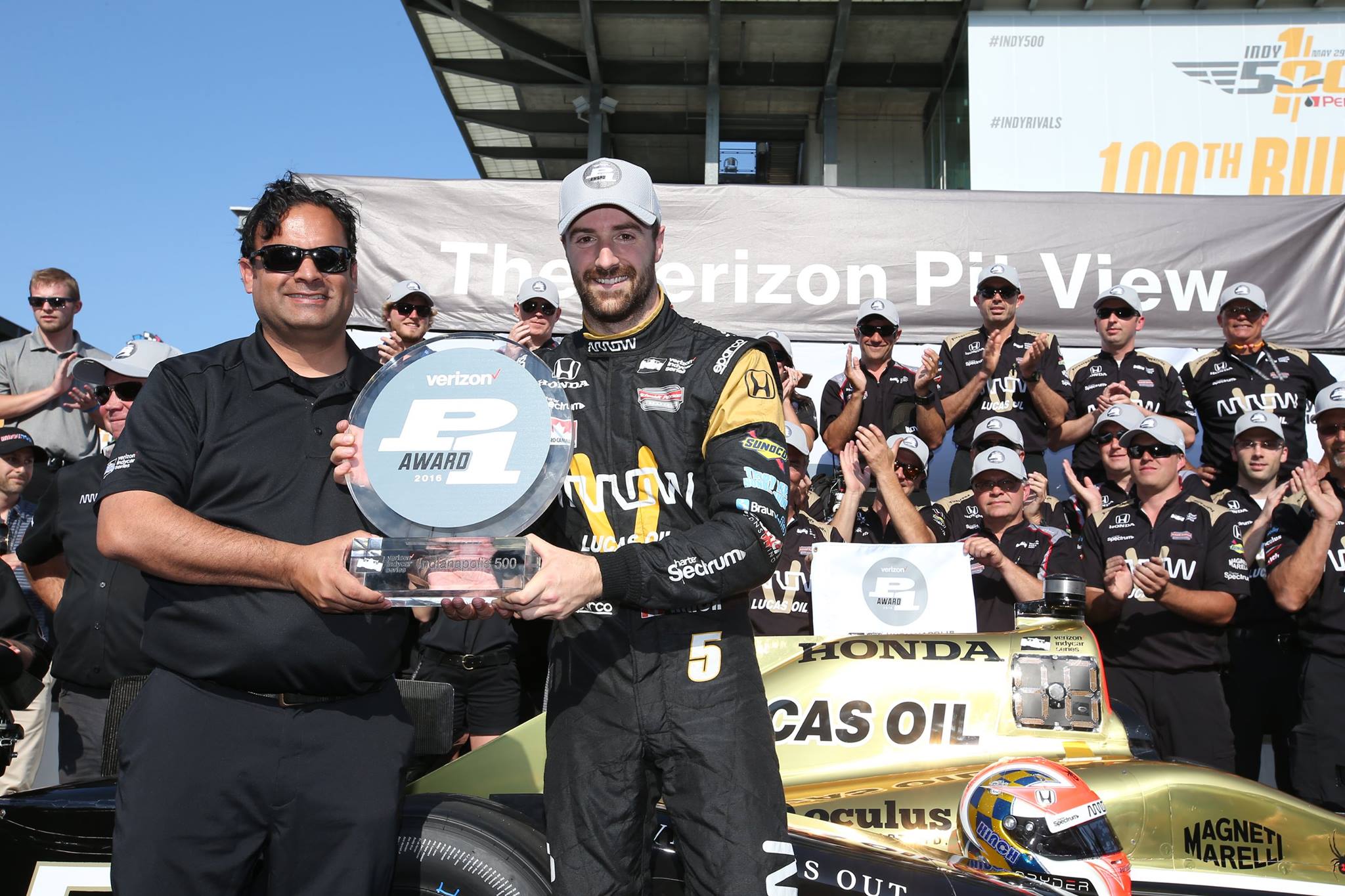 James Hinchcliffe claimed the pole position for the 100th Running of the Indianapolis 500 presented by PennGrade Motor Oil. The pole came a year after a serious accident in practice for last year’s Indianapolis 500.

The Schmidt Peterson Motorsports driver Hinchcliffe was the fastest driver of Saturday’s qualifying and concluded Sunday’s Fast Nine qualifying. On the first of his four qualifying laps he couldn’t match the previous leader Josef Newgarden but with faster following three laps he claimed the pole position with an average speed of 230.760 mph. The pole position is the first for a Honda-powered car at the Indy 500 since Chevrolet’s return in 2012.

A year ago, Hinchcliffe had a serious accident in the Monday practice of the Indy 500 race week. The Canadian suffered a life-threatening blood loss when a wishbone entered the cockpit in a crash. Now he is having the best possible return to the Indianapolis Motor Speedway as he will start the 100th Indy 500 on pole position.

Josef Newgarden qualified in second place for Ed Carpenter Racing with an average speed of 230.700 mph. His first lap at 231.551 mph was the fastest of the day but his speed decreased too much during the following laps and he missed the pole. Newgarden is the only driver with a Chevrolet-powered car in the front row as the 2014 Indy 500 winner Ryan Hunter-Reay qualified his Honda-powered Andretti Autosport machine in third place with an average speed of 230.648 mph.

The second row has two Andretti drivers as Townsend Bell qualified in fourth and Carlos Munoz in fifth place. Will Power was the best Team Penske driver, qualifying his Chevy-powered car in sixth place.

Before the Fast Nine qualifying, the drivers ranked from 10th to 33rd on Saturday determined the start rows from fourth to 11th rows.

The first group was also topped by an SPM driver. Oriol Servia claimed the 10th starting position with an average speed of 229.060 mph. Alexander Rossi of Andretti Herta Autosport, the 10th-fastest of Saturday, will start the race in 11th position. The fourth row was completed by Takuma Sato of A.J. Foyt Enterprises, making that an all-Honda row.

Last year’s pole-sitter Scott Dixon will start in 13th place. The Chip Ganassi Racing crew did magnificent job in changing the Chevrolet engine in 64 minutes, just in time for Dixon to be able to participate the qualifying.

Alex Tagliani became the fourth driver to crash during the week at the IMS as he spun at Turn 4 and hit the pit wall with the nose of his car. Tagliani didn’t injure himself but will start the race from the rear of the field and the A.J. Foyt team will have some work to repair the front of the No. 35 Honda.

The oddest incident of the qualifying happened to the defending Indy 500 winner Juan Pablo Montoya. Montoya hit a trash bag on his qualifying run and the bag got stuck underneath the car before getting blown off later. Montoya qualified at the rear of the field well off the pace, yet INDYCAR gave him a new attempt with refueling and new tires permitted. Montoya will start his pursuit of a third Indy 500 victory from the sixth row in 17th place.

Practice at the Indianapolis Motor Speedway continues on Monday when the turbo boost will be reduced back to race level. The Monday practice will take place from 12:30 to 4:00 pm local time (6:30 to 10:00 pm CET).