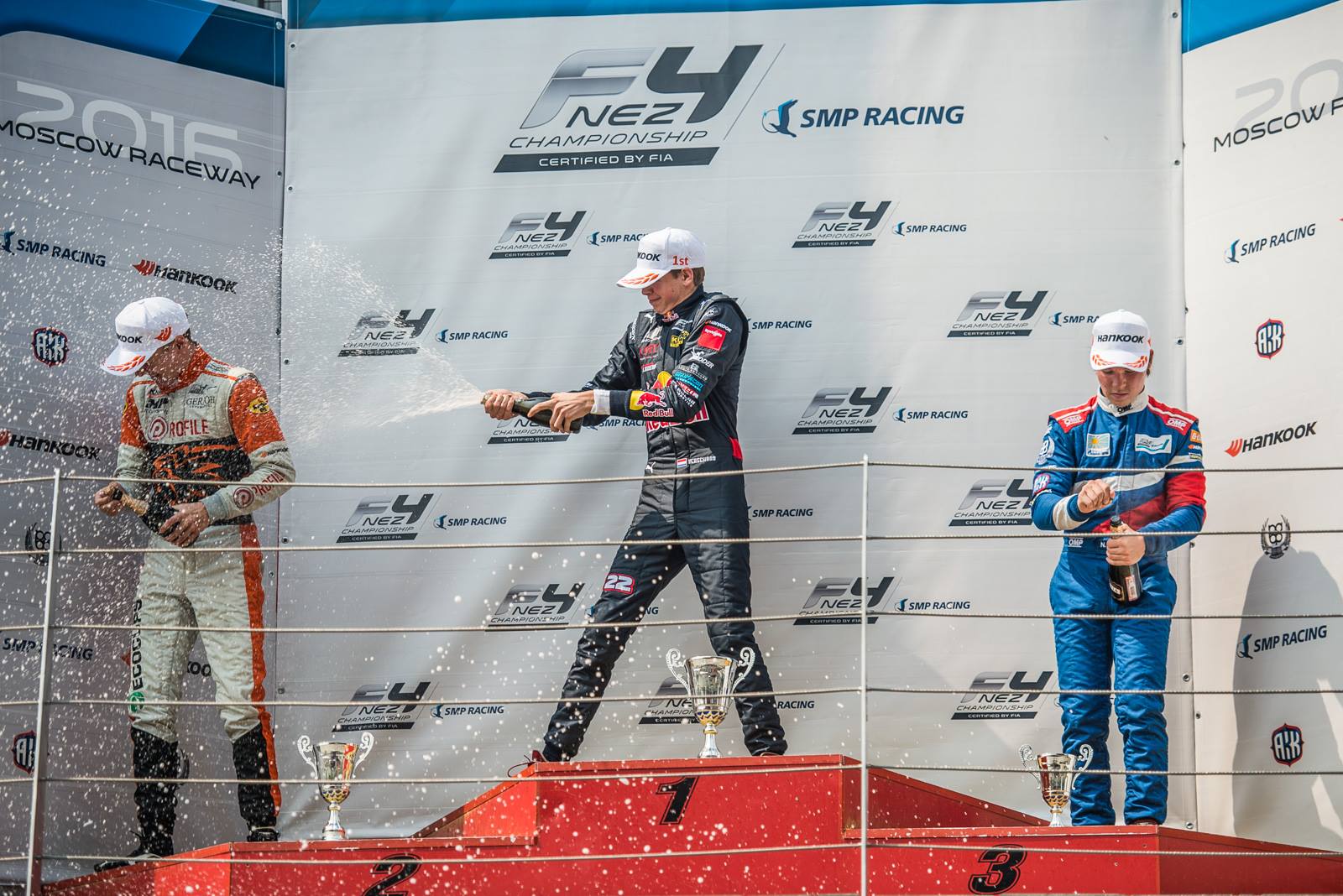 The sky was clear as the cars lined up for Race 2 on Moscow Raceway. Artem Petrov got a race ban after not complying with the black flag given as the Russian driver did not serve his Drive Through for jump start, so only 17 cars entered the grid for Race 2.

The starting order was based on Race 1 results, which meant Richard Verschoor was to launch his car from pole position for the 18’+1lap Race 2. On Saturday Race 1, Richard Verschoor had a great start from P1 and the same happened again as the Red Bull Junior driver held his position in the front easily. The start was clean except for Aleksey Korneev who stalled while being P3. The second-year driver therefore dropped to the back of the grid.
The first of many dramatic moments after the start happened in lap 3 when Nikita Volegov spun in turn 9 loosing a bunch of positions. Fights were on all over the track and that unfortunate Gleb Zotov lost his front nose and was forced to retire. The championship leader Jarno Opmeer has a clean move on Aleksander Vartanyan, taking P3 and important points.

Meanwhile, Markkanen brothers, Rasmus and Roope battled hard for P9, and as Roope went wide in the last corner, Rasmus got the upper hand on his twin. The climax of race happened on the final lap as Jarno Opmeer closed the gap on Nikita Sitnikov whose tires were degrading dramatically. Jarno Opmeer took his chance on the main straight and overtook the Russian for P2. Some important championship points for Jarno Opmeer as his fellow countryman Richard Verschoor is cutting his advance in the general standings.

“It was really nice to defend from Aleksey Korneev (in the Race 2) for 18 laps, keeping him behind and getting the third place. I really enjoyed the fight.”

The sun was blazing when the 18 cars were about to go full throttle and fight for important championship points on the last race of the SMP F4 NEZ Championship Round 4 in Moscow. Richard Verschoor was again on pole position and he continued where he left off by charging into the first corner in P1. Aleksey Korneev once more did not manage to perform a good enough start and lost his P2 for Nikita Sitnikov. Jarno Opmeer took advantage of the very average start of the Russian to overtake him during the first lap.

On lap 3 Tuomas Haapalainen was fighting with Aleksander Vartanyan for P9 when the Finn suddenly spun, went off track but managed to rejoin the track in the back of the field. Artem Petrov’s nightmare weekend continued as he drifted wide on the gravel and had to retire.

Jarno Opmeer and Aleksey Korneev had an epic fight for P3 as their cars went side by side on the back straight, none of them was ready to give up. But Jarno Opmeer was defending his positoin hardly, preventing Aleksey Korneev to find any opening for an overtake. Nikita Sitnikov finished P2, a very consistent weekend completed for the young Russian from the SMP Racing organization who went on podium on all the races. Richard Verschoor controlled the race from the start to the chequered flag, taking his first hat-trick weekend in the SMP F4 NEZ Championship.

“I won all the races, all the practices and all qualifying’s so that’s really something to be happy about. I’m still second on the championship and I will not set for second, so I will continue to push to grab that championship victory”