Lewis Hamilton took pole position in a crazy qualifying session rhythmed by rain and the spectacular accident of Daniil Kvyat. Thanks to Rosberg and Vettel’s penalties, Nico Hulkenberg and Jenson Button would start second and third.

Q1: Nico Rosberg would get a 5 place penalty for a gear-box change after his accident in free-practice. His car was not ready for the first part of Q1. Lewis Hamilton set the pace in Q1 early stages while Sergio Perez faced a suspension failure and had to retire from the session.

With 8 minutes left to the clock, Rosberg went out on track to take fastest time from Hamilton. With two minutes to go, Daniil Kvyat broke his wishbone of the polemical kerbs and hit the pit lane entry wall before finishing in the gravel area of the last corner. This accident provoked a red flag during ten minutes.

The session could resume before Carlos Sainz’s engine failure which prevented everyone to improve. Therefore, Magnussen, Palmer, Haryanto, Kvyat, Ericsson and Nasr were out while Pascal Wehrlein got himself in Q2.

Q2: The rain was expected to be there by the middle of Q2 which explained why all the drivers headed out quite early. Rosberg was blocked by Romain Grosjean in his first lap but managed to stay close to his teammate. The Frenchman went wide and had to pit early without a flying lap. Some drivers like Vettel, Raikkonen or Ricciardo decided to head out again with soft tyres to start the race with. The rain falling put an early end to the session. Gutierrez and Wehrlein set their best qualifying performances of the season with P11 and P12. Grosjean and Alonso followed while Perez and Sainz did not set any time.

Q3: The rain kept on falling on the circuit when the session resumed. The drivers headed out with intermediary tyres. With seven minutes to go, the rain stopped and the track started to dry quite fast. Around mid-session, Ricciardo was the fastest from Rosberg and Max Verstappen. Nico Hulkenberg was the first to head out with slick tyres before everyone did the same. Thanks to his bonus warming lap, Hulkenberg could set the fastest times before Mercedes topped him.

Lewis Hamilton got pole positon ahead of Nico Rosberg and Nico Hulkenberg. Thanks to Vettel’s and Rosberg’s penalties, Hulkenberg got P2 and Button got P3. Raikkonen, Ricciardo, Bottas, Verstappen and Massa completed the top 10 while Hulkenberg was under investigation for exceeding speed under yellow flags. 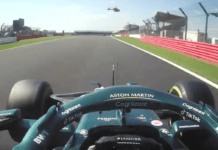