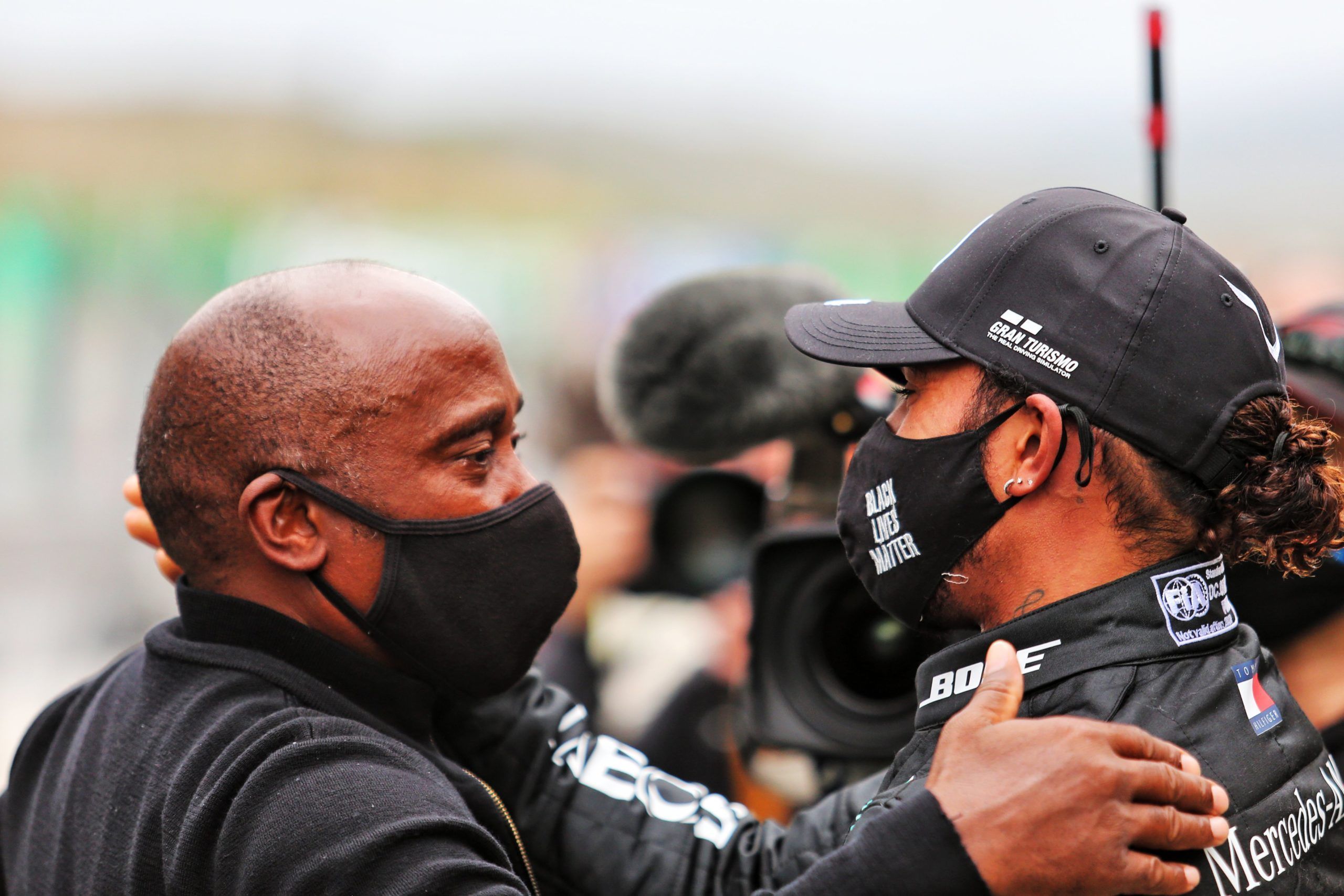 Anthony and Lewis Hamilton talk about the hard journey to reach the milestone of 92 F1 wins as Max Verstappen talks about his mindset.

Having matched Michael Schumacher’s win record 91 races in Germany, Hamilton eventually beat it in Portugal to have 92 F1 race victories. Not only that, the Brit took another step in equaling the championship record of seven titles, held by the German.

Its been hard work for Hamilton, coupled with luck, especially with his switch from McLaren to Mercedes. To capture the bright moment in his career, his father Anthony, was present at Algarve. The two even embraced each other just after the race in an emotional moment.

Speaking to Sky F1 after the euphoric moment, Hamilton Sr was humble with his son’s achievements as he stuck to the line of putting in the hard work to be in the position they are in. “It is unbelievable,” he said. “It was very emotional when Lewis came over. It was almost like a culmination of everything when he first said that I want to go go-karting.

“When he said I want to go go-karting, I said to Lewis that we can’t afford it but if we are going to do it, you are going to do it seriously. And we have been doing it seriously ever since, so it was just like that it was the first time we have ever gone go-karting. The whole mental process that goes into racing, it is like ‘I’ve got to win this, I really want to win this’, I don’t mind the car whatever it is.

“He’s done the same thing at every race, it is just phenomenal. It is tough to live through the ups and downs as a family. I am sure it would have been same for Michael’s parents. When you start with go-karting, you don’t sit down and say we are doing to win the world championship, we are going to do it multiple times, amass all these points, but all you do is, work hard at that moment in time.

“And for me, every race that Lewis does, it is just the same as how it is in go-karts, I am going to do the best I possibly can and if I can be in points, that’s great and if I win, then it is a bonus, that’s always been the train of thoughts, it’s been absolute amazing,” summed up Hamilton Sr, as he added about his wish list for his son as a father.

“All I ever want for Lewis was to have a decent job,” said Hamilton Sr. “We always wants our kids to be happy and better than we are, to enjoy their life, to be a good person. For me, that’s been the main objective, everything that has happened, it is all bonus. I am just extremely proud that he’s got a great job and he’s been a great human being.

“And these all records achievements in racing, that’s the bonus in our lives. It means a lot and I hope it means a lot to others. They look at us that in 1993 we had nothing but just with dedication, you would be surprised what you can achieve. It is a great moment.” For Hamilton Jr as well, it was another moment of reflection and soaking in.

“It’s just reminiscent of the beginning when I joined the team, the decision I took to join the team and what we have done since,” said Hamilton Jr. “I knew that we would win championships. Did I think we would win as many as we have? No. Did I think we would win this many races? Of course not. But it is a phenomenal time for us and the great thing is that it’s not just me that is living with the history, it’s the whole team and I think everyone acknowledges and realises how much they are part of it.

“As for setting a new record, I don’t believe in the saying the sky’s the limit. It’s just a saying. It depends how much we want it, how much we want to continue to raise the bar and going by our history together, just the way we work, we don’t sit back on our results, we keep working, we keep elevating. Every race feels like the first one. I don’t know how that’s possible after all these races but for me it does, just as challenging as the first, and I think there is a lot more for us to do,” summed up Hamilton Jr.

With the new record now getting set-up, it is for the current rivals of Hamilton to now push ahead and break it. For the likes of Sebastian Vettel and Fernando Alonso, it may be difficult but the likes of Verstappen, Charles Leclerc and even Lando Norris, Carlos Sainz and more, can still push on and eventually break it.

For Verstappen, though, he is not thinking that far ahead, whether it is wins and or the titles. “You just have to accept the situation you’re in, because otherwise you would become a very frustrated person if you don’t accept it, so that’s what I did,” he said. “I come to a Grand Prix, I always try to get the best out of it and it’s a good motivation.

“I can enjoy third or second if I know that I push myself to the limit, I push the car to the limit and I know that the team did everything they could. Like again, Red Bull did a few amazing pit stops in Portugal. Stuff like that motivates me but also motivates them. I take my enjoyment out of that. And in the end of the day, yeah, I mean everybody loves winning, that’s why we are, but if it’s not possible, it’s not possible.

“I mean at the end of the day, I don’t think that when I’m 40 or 50 years old I care a lot about those kind of things of being the youngest world champion or race wins record holder. I just want to look back when I’m at that stage, when I’m 40 or 50 and I look at myself in the mirror and say did you get the most out of yourself?

“If you can say yes, then I’m happy about that because if that means you win seven titles or whatever or zero, you need a bit of luck for that as well, to be at the right team at the right time. Sometimes it doesn’t work out like that but we’ll see. I still have a few years ahead of me, so hopefully things will change,” summed up Verstappen.