Home F1 Hamilton plays around about his future; Wolff has own successor on mind 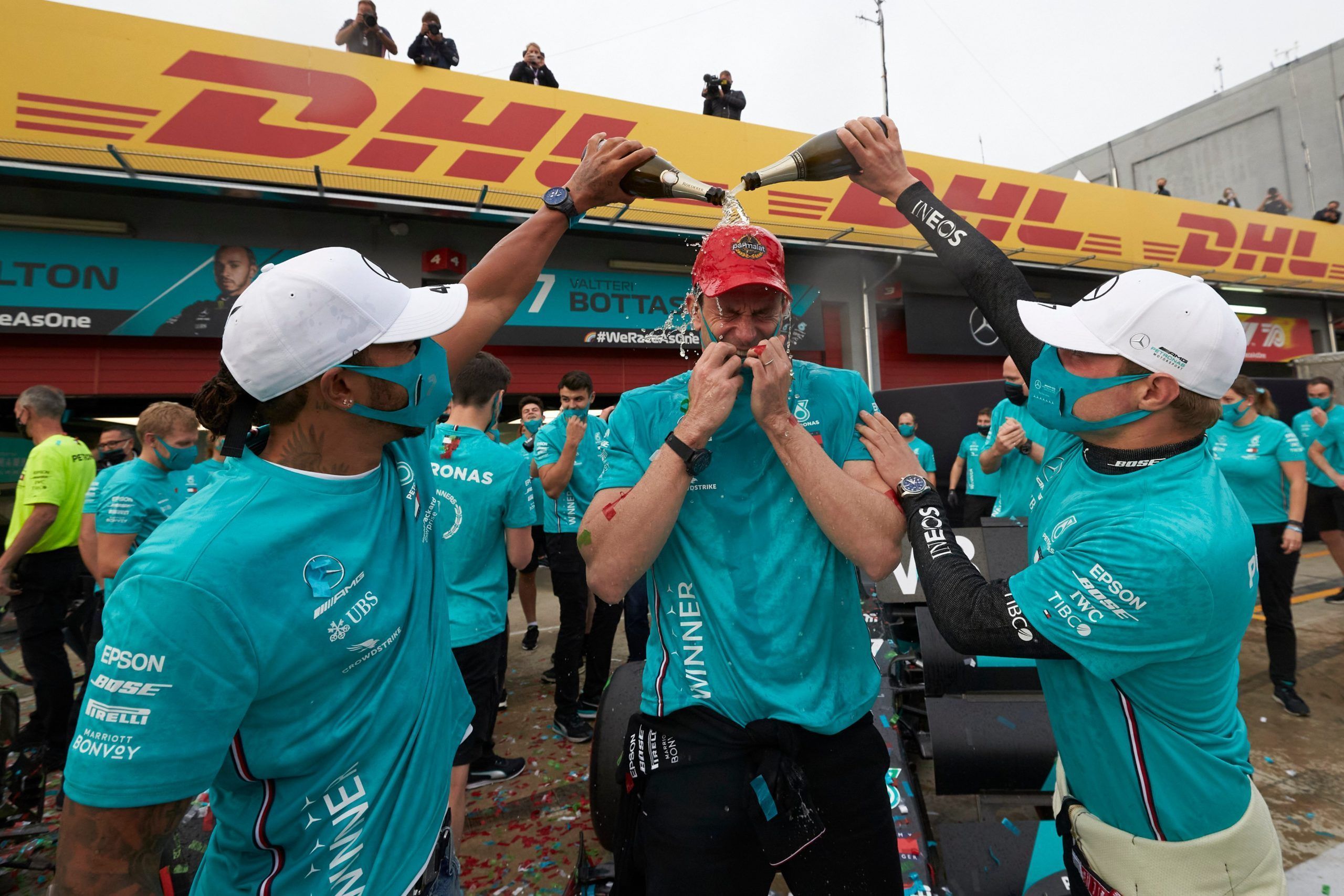 Lewis Hamilton dropped a bit of a bomb regarding his F1 future after the Emilia Romagna GP as Toto Wolff says he has his own successor in his mind.

Reflecting on the constructors’ title and his own race win in F1 Emilia Romagna GP at Imola, Hamilton was in a bit of a mood as he kind of dropped a bombshell like quote to raise some eyebrows regarding his future in the sport with Mercedes.

When he was told about the comment from Toto Wolff regarding having a shelf live which is coming to an end in terms of his team principal role, Hamilton went philosophical with the situation, even though he was pretty relaxed when answering about his future as well.

“I don’t even know if I’m going to be here next year, so it’s not really a concern for me at the moment,” chuckled Hamilton, when asked about Wolff’s future move. “We have a lot of deep conversations, Toto and I, so I’m very aware of where he is mentally, and we share a lot of and carry a lot of the weight together I think.

“I’ve been here a long, long time. I can definitely understand wanting to pull back a little bit and giving more time to family and those sort of things. I don’t know who he will replace, but again, he is a leader. He’s not going to put anyone who is not up to the job. He will find the right people.

“That’s why we’ve had the success we’ve had, he’s found the right people and put them in the position to be able to shine as bright as possible. He has just empowered every person in this team to be the best they can be. He will find somebody who will be able to take on and continue.

“But it’s not one person, this team is not about one person, it’s a collective of a lot of people. Toto doesn’t build the car. It’s a real team effort. But I’m supportive of him, whatever he wants to do moving forward,” summed up Hamilton.

When pressed further about a real possibility of leaving, Hamilton added: Well we’re in November, and I’m still, it’s crazy that we’re… Christmas isn’t that far away. Naturally, I feel great, I feel still very strong, I feel I can keep going for plenty of months.

“But you mentioned about Toto and shelf life. There’s multiple things that stay on the top of my mind. I would like to be here next year, but there’s no guarantee of that for sure. There’s a lot that excites me of the outer life, so time will tell.”

Aside Hamilton, teammate Valtteri Bottas – whom Wolff has managed for long – had praises for the Austrian too. “I think he is a tough guy to replace because of the way he leads the team,” he said. “He’s a smart guy, he knows what kind of support each team member needs, support and criticism, and how to help them to be better versions of themselves.

“That applies to every single team member. He can read people well, he’s supportive. He’s done something incredible. I am fortunate that I have known him since 2008 and he has been a big part of my early career as well. He’s a great guy, and whatever he’s going to do in the future, I’m going to respect that as well. In the end, you’re living for yourself with this life and that’s how it goes,” summed up Bottas.

While Hamilton is still contemplating his future, Wolff seemingly made it clear that even though he is likely to remain with Mercedes but his role will change from team principal to being something else – mostly behind the scenes, rather than every-race attendance.

Elaborating more – without actually telling the name – Wolff noted that they have a successor to him already on their mind. It remains to be seen who he is but last year in Brazil, they tried James Allison in the role when the Austrian missed the grand prix.

“I have but I can’t tell you,” said Wolff to Sky F1. “As I have been saying, my situation is little bit different because I am co-owner with the Mercedes team and I am never going to abandon it because it is just what I love to do. What’s better than be part of a sports team, to be part of such a fantastic gang of people.

“What I said is that everybody has a little shelf life in a role and I have come to an end of mine. I think I can still contribute, but I need to think about the future also, going forward and bringing somebody up, developing and doing this is a fantastic challenge for me, that will be the next chapter but you’ll see me around for a while,” summed up Wolff.

Here’s what Toto Wolff said about his future