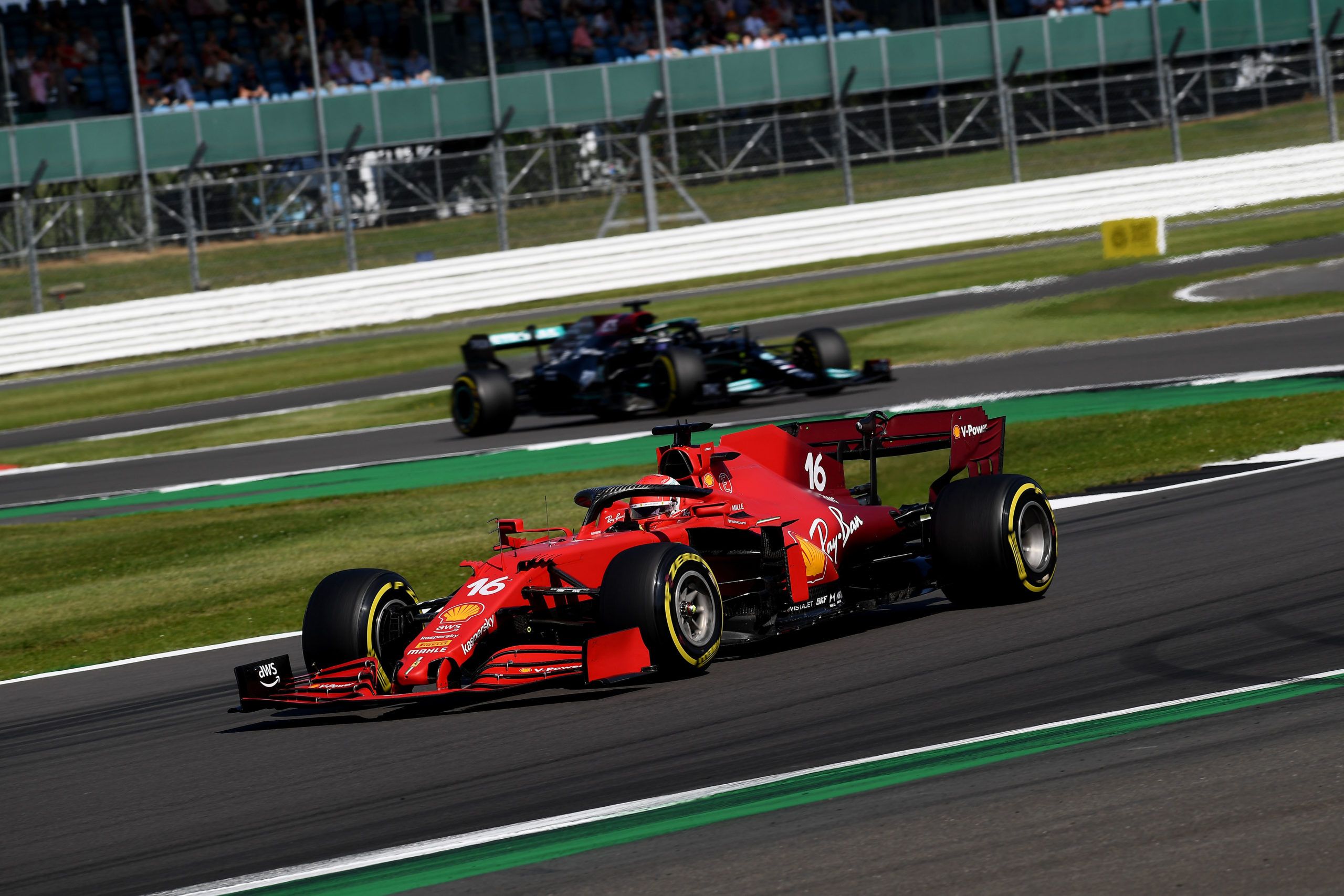 Lewis Hamilton goes through chasing down Charles Leclerc in F1 British GP to win his 99th grand prix, putting him the Lap 1 clash and subsequent penalty.

It was an eighth F1 British GP victory for Mercedes’ Hamilton and a first podium of the season for Ferrari’s Leclerc at an action packed controversial Grand Prix, but it didn’t come easy for the Brit, who was left to fight back and manage the pace as well.

After incurring a 10 second penalty and struggling to keep pace with Leclerc in the first stint, Hamilton found himself fourth and 12 seconds behind the Monegasque, at the start of the second stint, with Lando Norris and Valtteri Bottas to pass too.

Hamilton talked about his struggles in the first stint, where Leclerc opened up a good gap. “Charles did such a fantastic job,” he said. “I honestly didn’t know at the beginning that we would be able to beat him. I thought I had good pace initially on the mediums but then Charles just started opening up the gap and putting in some fantastic laps.

“I could see that he wasn’t really managing so I was like ‘Jeez, he’s surely going to blister at some stage’, but he said they don’t blister so… For us, I started struggling with our front tyres. I knocked out the left front, it was completely empty, so I had to pit,” summed up Hamilton.

Ferrari were excellent on their tyres all weekend contrary to recent races like France. This enabled Leclerc to maintain a comfortable 2+s gap to Hamilton behind. The French GP still haunts the Italian manufacturer and its something they never want to see again, their worst result of the season as they fell to the back of the midfield.

In British GP – on a similar type of track – Ferrari were able to do better which Leclerc acknowledged, but he stated that the problem is still not solved. “For the tyres, there’s been a big investigation after France to try to understand exactly why we were struggling that much with those front tyres,” he said. “I don’t think we get that answer yet.

“So yes, we are much better here but I don’t think it is because we found the complete answer of what happened in France. So, the investigation is still going on and we are still working hard on it. And even though we’ve had a good day, we don’t forget about the bad day in France and once we understand the full extent of why we were slow in France then I’m pretty sure we will do a big step as a team and it will help us to reproduce this type of performance as we did,” summed up Leclerc.

Ferrari know it will never get as bad as France and it acts as good reference point for them and something they can learn a lot from as the season goes on. On the other hand it was Hamilton struggling with tyres in British GP which forced him into that earlier pitstop with blisters starting to appear and a dramatic loss of grip.

Hamilton was handed the second most lenient penalty possible after the stewards felt he was more to blame for the first lap crash with Max Verstappen. He now had a mountain to climb as he languished in fourth 12 seconds behind Leclerc who was in free air. He took a methodical approach to the race at the start of the second stint.

“After the pit stop, honestly Charles wasn’t on my mind when I came out, it was really trying to see if I could catch the car ahead, just one by one, and obviously I got the McLaren, I was chasing down Valtteri and he was so gracious to work so well as a team-mate to allow me to pass, so I could chase for the win for the team,” said Hamilton.

“That’s great sportsmanship, I really do appreciate it.” As he said, teammate Bottas played his part in Hamilton’s win, not holding him up after team orders. Had he not been let past, it could well have been scarlet red on the top step of the podium.

Once Hamilton was released, his pace maintained at around a second per lap faster than Leclerc and the opportunity for victory at his home race yet again flooded his mind and then his driving. “Then I saw myself catching him but I was thinking ‘by the time I get to him my tyres would be finished at this pace’,” he said.

“But then I saw the backmarkers and I realised that might create some opportunities, so I was like ‘I’ve got to catch him as soon as possible’ so that when I did catch him there would be opportunities to fight.” Hamilton drove to his brilliant best for this 10 laps, until lap 50 when he was within striking distance of Leclerc.

It just so happened that his best and first opportunity to overtake the Ferrari was at the scene of the first lap crash with Verstappen and it understandably stirred up some nerves. “My heart nearly stopped when I went up the inside of you in Turn 9, because I though the same thing was going to happen that happened to me and Max,” recalled Hamilton.

“I had to change my boxers after.” Hamilton pulled a good move on Leclerc up the inside of Copse where the Monegasque went wide. However, this was a very different overtake to that with Verstappen, a number of circumstances came together which saw no crash.

“Firstly, I think as Charles was saying, he was very respectful in terms of leaving a gap,” said Hamilton. “I got relatively… somewhere alongside him so he knew that I was there but he stayed committed and just did a wider line and he nearly kept it and that was really great racing.

“I think for me in that moment, I backed out at one point just to make sure that we didn’t come together but I think it was just a really nice balance and I think that’s really how the racing should go and close. In a perfect world, that’s what would have happened in the first attempt but different time, different place, different driver,” summed up Hamilton, who seemed to elaborate on difference between Verstappen’s driving style and Leclerc.

In trying to give Hamilton space and avoid a crash Leclerc ran wide off the track at Copse, marbles, tyre wear and just being off the racing line means this is likely to happen. “I knew Lewis was in the inside, I left a space and unfortunately I think I had stayed in front but in the very end of the corner I got a snap and lost a little bit of time and then Lewis got in front of me,” said Leclerc.

It was a big weekend for both of these drivers. For Hamilton, the home event and briding gap to Verstappen was key, but it marked Leclerc’s first podium of the season and capped a very competitive weekend from Ferrari.

Here’s Lewis Hamilton on his and Max Verstappen’s aggression