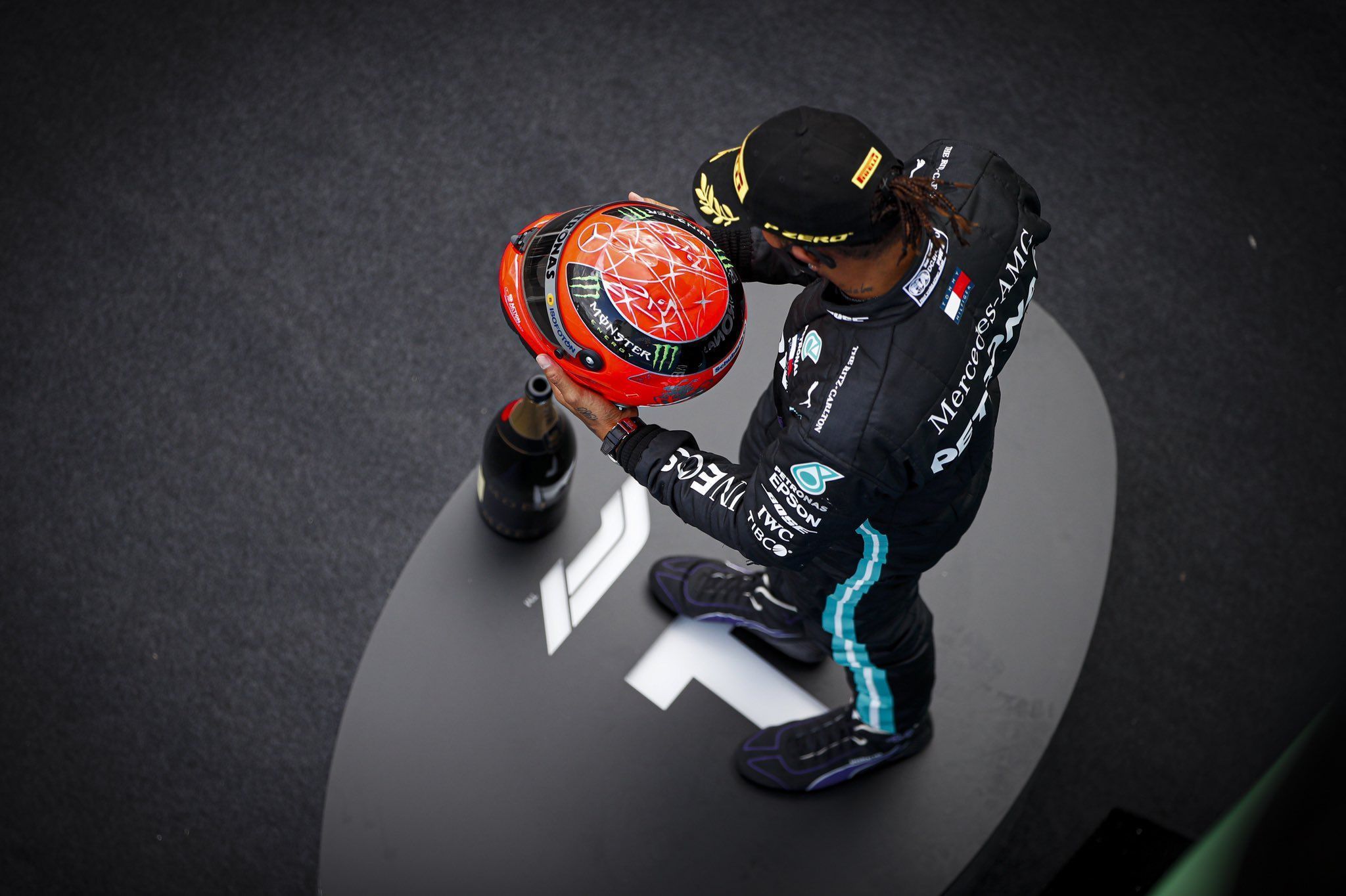 Lewis Hamilton was emotional getting the Michael Schumacher helmet from Mick post the record-equaling F1 Eifel GP as the family appreciates the feat.

At the end of his milestone 91st F1 victory, Hamilton wasn’t aware of the feat he had just achieved; he was oblivious to the meaning of his win. This changed, however, at the end of his cool-down lap, when the realisation dawned on him, according to the Brit himself.

As he stepped out of the car, Hamilton was embraced by his team. It was at this point that his day became yet more memorable. As his interview neared its end, David Coulthard teased a surprise, and on cue, F2 championship leader Mick Schumacher came into view, one of his father’s race helmets from the 2012 season in hand.

Schumacher gave Hamilton the helmet worn by ‘the maestro’ all those years ago, with the Brit immediately expressing his gratitude, a rare concession to emotional reflection from the determined six-time F1 champion.

“Congratulations and this is for you from all of us,” said Schumacher. “It’s a great achievement really. It’s a race helmet from 2012.” To which Hamilton responded: “I’m honoured man. Thank you. It’s such an honour. I totally appreciate that, thank you.”

Elaborating more: “I don’t know even what to say. You know, when you grow up watching someone and you idolize them, not just in terms of the quality of driver they are but that they are able to continuously do [it] year on year, race on race, week on week, with their team. I remember playing [as] Michael on a game called Grand Prix 2.

“Just seeing his dominance for so long I don’t think anyone, and especially me, could [have imagined that I’d be anywhere near Michael in terms of records. It’s going to take me some time to get used to it. Honestly as I came into the pit lane it was only then that I realized that I had equaled it. I hadn’t even computed it.

“I mean I couldn’t have done it without this incredible team, everyone continuing to push behind me and giving it their everything. So a big, big thank you and huge respect to Michael,” summed up Hamilton.

On the honour of sharing the top spot in the history of F1, Hamilton added: “Naturally everyone knows that he is a legend and an icon of the sport. I think what he achieved in so many areas but your know pushing the limit in terms of the physicality side, he really was a pioneer in being the fittest driver at the time, and what he did at both the teams he was at, particularly Ferrari, was just remarkable.

“I think for me, that number is so big it’s hard for people to, when it’s so far away, it’s hard for people to perhaps fully understand how hard it was for him to have got those 91 wins, to deliver weekend in weekend out, year on year on year, and stay so physically in shape and so precise. I understand that now more than ever. I can only tell you that it doesn’t get easier.

“From your first win to your 91st I’m telling you it’s been a long hard run. I’ve got great drivers around me who I’m enjoying racing. I’m hope that it’s closer between us moving. But Michael is and always will be a legend of the sport and I feel very humbled to have one of his helmets and honoured,” summed up Hamilton.

According to Hamilton, this helmet will make for an addition to a small but growing collection of helmets from Schumacher, the first of which was gifted to him at Abu Dhabi in 2012, when the German driver stepped out of the sport not to return. Strangely, there is no photo of the exchange available, at least on any public forum.

“I actually already have one of Michael’s helmets,” said Hamilton. “One of the really, really special moments for me was in Abu Dhabi 2012. I went over to the Mercedes hospitality and met with Michael and we exchanged helmets and that for me was a moment that I will never forget, to stand with someone who I grow up watching on TV and having the honour of exchanging jerseys or helmets, it’s what us sportsmen do and it’s the highest sign of respect that I can think you can really show.

“So to have the legend of the sport do that with me was really special. But to have his family honour me today, I’m just incredibly humbled. You know his son is such a great bright talent and just a really genuine human being so Michael’s obviously raised a great man in him and I look forward to seeing how his career will look moving forwards. Yeah, but now I have two special helmets from Michael in my small living room,” summed up Hamilton.

Post the gesture on world feed, Schumacher family released a small statement on their social media to further congratulate Hamilton. “Big congrats, an impressive achievement of a great driver. We cannot deny we would have loved for Michael to hold those records, but as he always used to say: records are there to be broken,” it stated.

I remember watching Michael as a kid, winning all those races and I was just dreaming of being there myself. It shows dreams really can come true. A big, big thank you to @SchumacherMick, this was truly a surreal moment. One that i’ll remember forever. 🙏🏾 #91 pic.twitter.com/LUzfSz79HB

Here’s how the F1 Eifel GP panned out