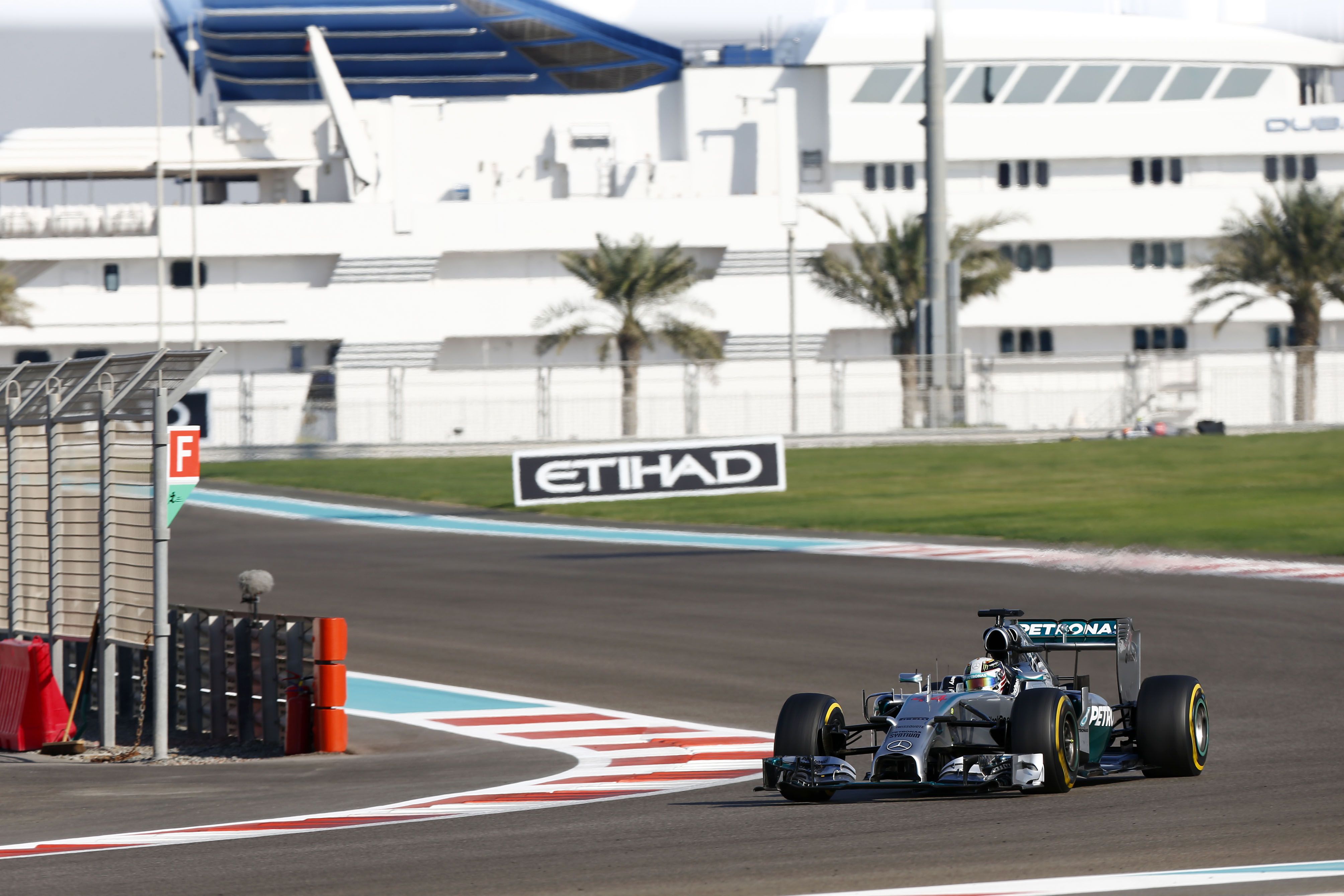 Lewis Hamilton has proclaimed today double world champion of Formula 1 after winning a race in which he has had a superb performance. The other side of the coin, Rosberg finished in the 14th position with a Mercedes plagued with problems. The Williams, Massa and Bottas completed the podium. Fernando Alonso finished ninth.

We arrived at the final race of the year where the championship is decided between the two Mercedes drivers, Rosberg started with advantage as he started ahead of Hamilton.

The light turns off, and both Rosberg and Bottas come out badly, a fact that both Hamilton and Massa took advantage to overtake, Hamilton had solved one of the ballots during the race. The start was pretty clean overall except a touch between Magnussen and a Sauber at the entrance of the first long straight.

Fernando Alonso got rid of Raikkonen and was placed fifth just as he entered the pits on lap 6. A lap later came Raikkonen, Button and Kvyat to cover position with Fernando (who had been out on traffic) but the only thing that could come out ahead of Spanish was Button.

Hamilton entered the pits on lap 10, as Bottas, who excelled Button and Alonso and a lap later Rosberg did the same. Behind the Red Bull began their comeback and Ricciardo took off a very quarrelsome Vergne on the same lap as Massa made his first stop.

On lap 16 Kvyat caused the first yellow flag, as his Toro Rosso was stopped at the last corner of the circuit. The rest was all very stable.

On lap 22 began to enter the drivers who had mounted the soft tire in the first stint, such as Vettel and Magnussen but Ricciardo could make the life out of his tires and entered in lap 28.

Then came the event that marked the grand prize, Rosberg went a little long in the curve 17 and a lap later suffered aconsiderable deficit of potency, lost much time with Hamilton and Massa came behind super strong.

After several communications with pits, the problem has been diagnosed, the ERS did not work. Massa finished ahead into German with little muss.

Lap 29 would see the second yellow flag of the race caused by Pastor Maldonado and a spectacular fire in the back of his Lotus, the result of an engine failure, it forced him to park before the entrance to the pit lane.

The window for the second stop of the drivers that came with soft then opened. Fernando was the first, this time without traffic, leaving just behind Button, who came around after the Ferrari driver did so, overtaking Alonso brilliantly in Turn 11 although later he lost the position because of a drop in pace.

Hamilton went ahead to boxeson lap 32 and a few laps later Rosberg and Bottas did the same; the Finn went gradually sticking to the German who was having problems and before stopping he got rid of him.

While Rosberg continued to lose positions, this time with Ricciardo, Massa was leading the race ahead of Hamilton.

Behind those beginning with hard now rode soft tire and went flying down the track, such as Hulkenberg who was ascending positions at the expense of the 2 Ferrari.

The championship seemed already sentenced but the spicy was to see whether Felipe Massa got enough with a podium or would fight for a victory.

Felipe finally pitted on lap 44 to mount soft tires and start a 10 lap race to try to overtake Hamilton, which stood at 10 seconds ahead of the Brazilian. Other riders that chose softs were the two Red Bull, Vettel on lap 47 and Ricciardo on 48. Kobayashi retired on lap 45.

While Hamilton and Massa were taking off quickly each lap, Rosberg was running in seventh position, on lap 52 he was suffering from faintness of the most serious type in the car, several components of the car did not work and he rolled out of the points. The team wanted him to retire but he decided to finish the race. A few laps later he was lapped by Hamilton who had the title in his hands.

Massa tried to make things difficult for the English but eventually with the absence of 4 laps he could not close the gap that separated him from the race leader.

Finally victory for Lewis Hamilton (the eleventh of the season) and achieved with this result his second championship after a domain that was only threatened Felipe Massa in the final laps. Still the two Williams finished on the podium since Bottas finished third. Fernando Alonso finished his job in Ferrari with a ninth place and Rosberg got a forgettable fourteenth.

Thus we come to the end of the 2014 Formula 1 season with an overwhelming dominance of the Mercedes team, hopefully the next season will be more equal.