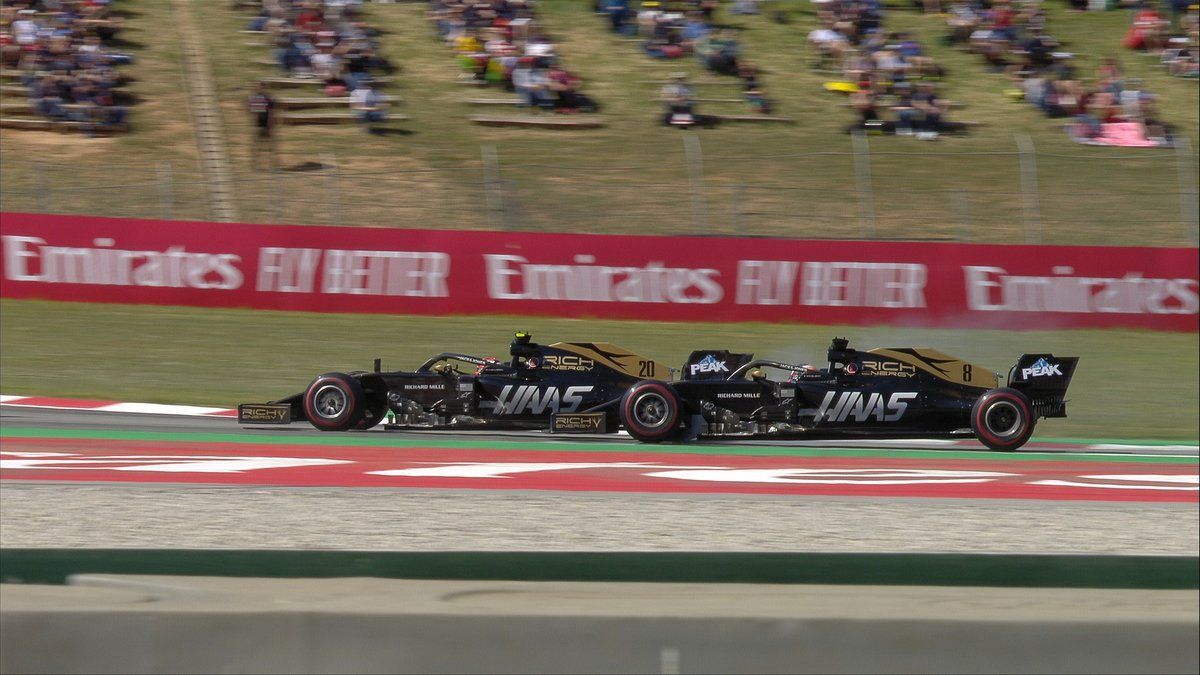 The optimism from Haas after Friday and Saturday proved to be right on Sunday in F1 Spanish GP race at Circuit de Catalunya, Barcelona, when the two drivers managed to hung to their Top 10 positions as opposed to losing places.

The team brought upgrades for the grand prix and it seems to give better results, especially for their tyre troubles. While one of their problems looks likely solved, it gave momentum to another one, which is the in-racing between teammates.

While it was steady at the start, post safety car re-start, it got too close between Grosjean and Magnussen twice as they made contact in the process, where the Frenchman then lost out to McLaren’s Carlos Sainz and Toro Rosso’s Daniil Kvyat to be 10th.

Grosjean almost lost out to Toro Rosso’s Alexander Albon as well but eventually hung on to score his first points of 2019 as Haas had their first since Australia. Post-race, Steiner was quick to get the two drivers to talk it out and solve the apparent issue.

The tangle between the two drivers did cost them valuable points even though both drivers managed a Top 10 finish. “It’s ended as being a little bit of a controversial weekend, but we’ve sorted it out – cleared the air between the drivers,” said Steiner.

“That’s the most important thing after their race. We maybe lost a couple of points, but we’re all happy to move forward from here, everything is fine. It’s been a good weekend points-wise, with getting two cars into the points.

“Hopefully we can learn a lot from the test here this week, so we can do the same in Monaco and Canada. At the moment it looks like they’ll be a little bit more difficult for us, because of the track layouts, but I think we can still score points.

“The whole team did a very good job here this weekend and we come away with double points – happy.” At the same time, Magnussen and Grosjean chose to avoid speaking about their tangle – at least in the post-race press release.

“It was good race in terms of pace, we had strong pace – especially towards the end,” said Magnussen. “I didn’t have that many problems with tyres. It’s been much better for us this time.

“We had a brilliant second pit stop from the team when the safety car came out to jump Kvyat. I had good temperature in my tires at the restart, I got past Romain, then attacked Gasly as well, but I couldn’t quite hold on to him. It was a good race for us.”

Grosjean added: “It’s been a good weekend, we’ve had good pace. Before the safety car we were running on our own, doing a good race – I was happy that. The restart was a bit more complicated, it wasn’t ideal for me as I lost a few positions in there.

“Overall, I’m happy with the way we’ve acted this weekend, happy we’ve shown that the car is fast. Now it’s onto the next one.” Even with the double points, Haas is only sixth with 15 to its name – two behind Racing Point and two ahead of Alfa Romeo Racing.