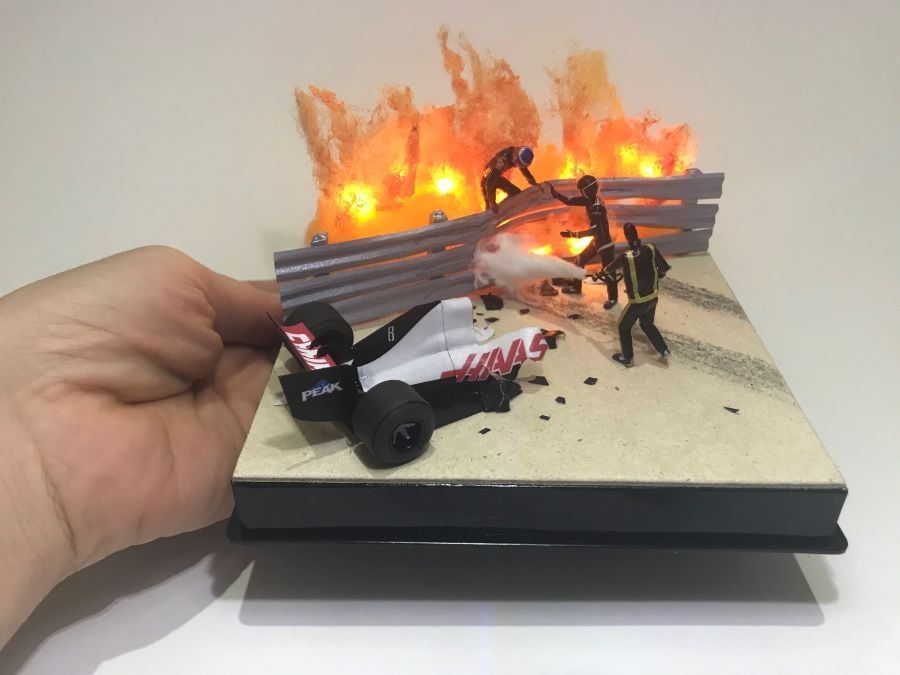 Romain Grosjean had another surgery this past week to fix just not his one but both hands for a past injury, as a fan recreates the crash moment in 3D form.

Having returned home from Bahrain, after missing the F1 Abu Dhabi GP, former Haas driver Grosjean, underwent another surgery this past week to mend both his hands. It was a successful one, as the Frenchman posted about it from the hospital.

He has since been discharged. Before going into surgery, Grosjean wrote: “On my left hand, the thumb ligament has been damage in the crash and we need to clean the wounds from the burn. Right hand also getting some treatment after some early 2020 injury.”

And post it, he wrote: “Morning all, wishing you a beautiful day. A good sleep and not too much pain. But a bit of an handful writing messages.” The old injury on his right hand was due to a cooking incident at home prior to start of the 2020 F1 season.

He never spoke about the incident at home, until after the Bahrain GP crash, when speaking to media. He carried the small niggle all-through the 2020 F1 season. After returning home, Grosjean posted another photo with fresh bandage on both his hands.

Everything went well🙏🙏🙏 thank you all pic.twitter.com/RSKzovLJ9C

This is the most beautiful helmet I could ever imagine.
It was created by Sacha, Simon & Camille for my last @f1 race in Abu Dhabi.
I will try to give it a ride in the future as it's far too beautiful to stay at home unused! pic.twitter.com/zTEy9QITP1

Here’s his right hand after the removal of bandage: https://www.instagram.com/p/CInN-LopifE/