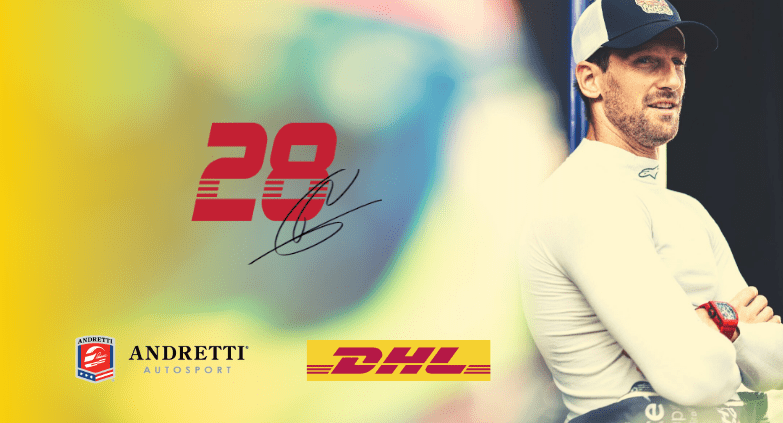 Romain Grosjean makes a switch to Andretti Autosport for the 2022 season, as Callum Ilott has signed a full-time deal with Juncos Hollinger Racing.

Having started his IndyCar career with Dale Coyne Racing this year, Grosjean instantly became a hot property showcasing good pace, with podium finishes. By mid-season, a potential switch to Andretti started to fill in to catapult him into a title position.

It became apparent when Andretti announced the end of its deal with Ryan Hunter-Reay, with the move finally confirmed for Grosjean to take over the #28 Honda with DHL as his partner and pair up with Alexander Rossi and Colton Herta in a three-car line-up.

“I’m delighted to be joining Andretti Autosport and driving the No. 28 DHL Honda for next season,” said Grosjean. “It’s a big honor to be joining such a great team as Andretti, anyone in the motorsport world knows the name Andretti. I’m super happy and proud to be racing with the team. I’m also very proud to be representing with DHL.

“I’ve known the DHL color on racing cars for a very long time. I couldn’t be more proud to represent such a great company in INDYCAR. I’m hoping that we are going to be very successful together, which is our aim on every side. I would like also to thank Dale Coyne Racing for giving me the opportunity to join INDYCAR. I’ve enjoyed the racing so much and it’s given me the change today to be racing with one of the most competitive and best teams in the world.”

Team boss Michael Andretti added: “We are thrilled to welcome Romain to the Andretti Autosport family. He already had an impressive resume before coming to INDYCAR and watching what he’s been able to do in his rookie season here has been exciting to say the least.

“His vast motorsport experience will be beneficial to the team alongside our already strong 2022 driver lineup. We also couldn’t be more excited to continue our strong partnership with DHL. The DHL sponsorship is one of the longest and most successful in the paddock and we look forward to continued success on and off the track.”

Elsewhere, Juncos Hollinger Racing confirmed the full-time signing of Ilott after the Brit drove the team in the last three rounds of the 2021 IndyCar season. The Ferrari F1 reserve driver will continue to drive the #77 Chevrolet machine as a sole entrant for now.

“Coming into the final weekend of our three-race run on the west coast, it’s great to announce that I will be continuing next year with Juncos Hollinger Racing for the 2022 NTT INDYCAR SERIES season,” said Ilott. Obviously we have had a steep learning curve here the last few races to try to put everything together.

“We have had some real positives and know the things we need to work on. Knowing what Ricardo Juncos and Brad Hollinger have in place for next season and especially over the winter of what we can do in testing, I definitely feel we can put ourselves in a great position to start off the 2022 season strong.

“I look forward to continuing the work that we are doing and heading into the winter to start a new journey over here and I would like to thank the Ferrari Driver Academy for allowing me to take this opportunity,” summed up Ilott.

Team owner Ricardo Juncos noted: “We are very pleased to announce Callum to the team full time for the 2022 NTT INDYCAR SERIES season. His maturity, speed on track, and feedback is surprisingly good for being 22 years old. We were very impressed with his feedback and the physical condition of Callum after Laguna.

“After a long tough race at Laguna, he got out of the car not even showing any signs of fatigue. Considering Laguna was a full green flag race, Callum proved to be in incredible shape. We know we are not the fastest car on track and have a lot of developing to do, but Callum pushes himself to get everything out of the car and has shown great speed.

“Over the past few weeks, Callum has shown us he is the right driver for our full-time run next year, so we are thrilled to have him join our program full time. We will be building our program in all areas and will have the time to test and continue our development as a team. I want to thank Callum for committing to our new NTT INDYCAR SERIES program and look forward to our full-time effort as a team next year.”

And Brad Hollinger added: “We are very excited to have Callum commit to us for the 2022 NTT INDYCAR SERIES season.  Our goal was to secure a talented driver for the final three races of the 2021 season so that we would have a strong baseline going into a full run in the 2022 season. Therefore, we were quite happy to have a driver like Callum to work with these final three races.

“He proved he can perform during the past two races in a variety of areas. Callum has maturity beyond his age and has a very enthusiastic personality. We knew we had the driver we wanted for the 2022 campaign after his strong performance during the Laguna event, particularly during the later stages as his lap times were consistently equal to the ninth and 10th car paces.

“I am elated that Callum has chosen Juncos Hollinger Racing to continue his racing career. The continuity this gives us throughout the winter and into next season is invaluable in creating a cohesive winning team. I could not be more excited for the 2022 season and expect we will surprise people during the year with Callum.”