Home F1 Gasly played it smart to thwart the tactics of Alpine duo in... 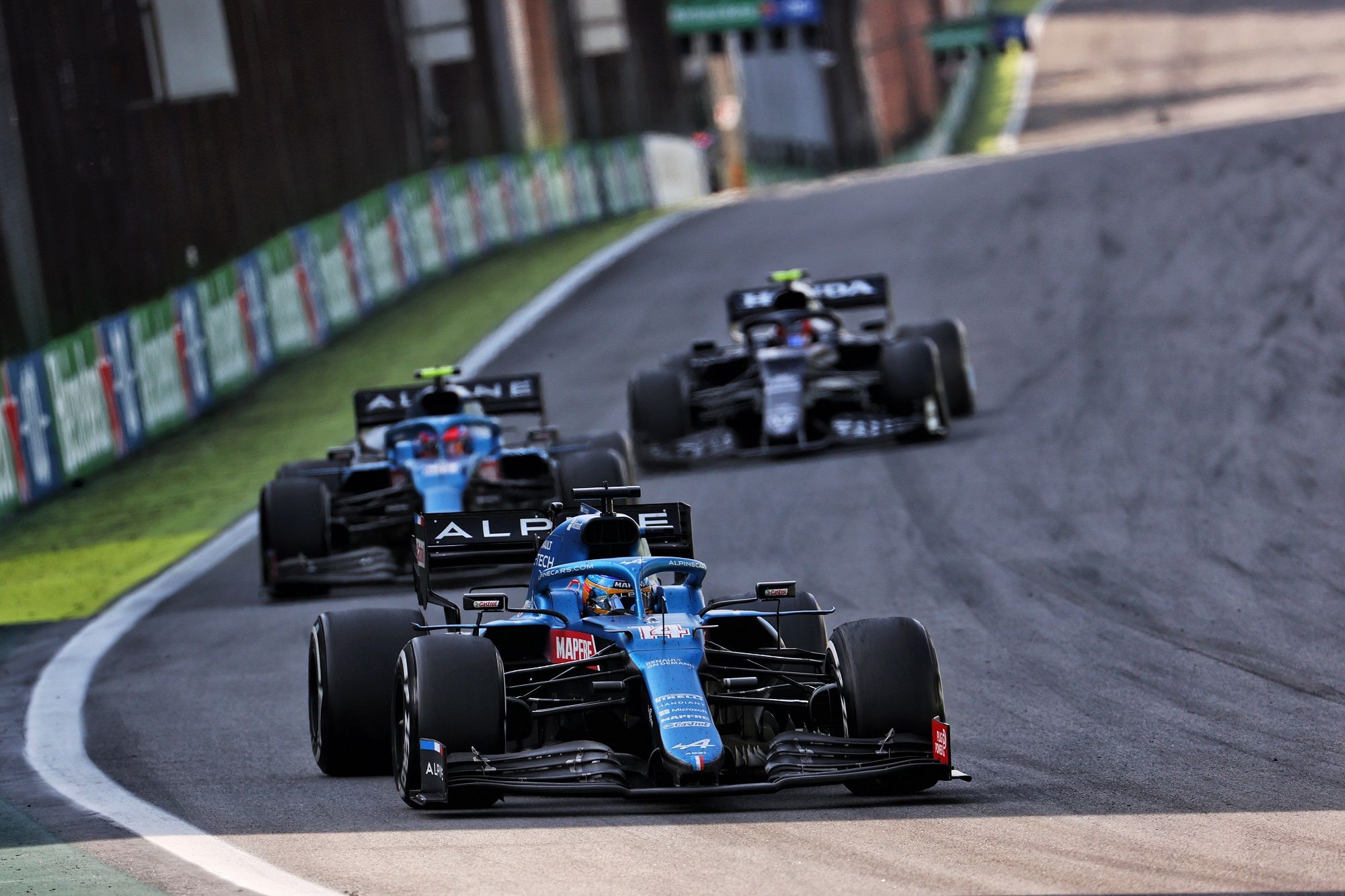 Pierre Gasly says he had to play a smart game in F1 Sao Paulo GP to thwart the tactics of Alpine pair of Esteban Ocon and Fernando Alonso.

The F1 Sao Paulo GP showed how the Alpines drivers fought for points as Alonso and Ocon worked together against AlphaTauri’s Gasly, who started the race from seventh ahead of the Frenchman in eighth and the Spaniard in 12th.

The Alpine teammates showed co-operation and strong desire to fight unitedly to beat AlphaTauri for the sake of their team as any number of points scored will help them in the constructors’ championship, where the two are tied for last two races.

Ocon believed it was a fun race, where the Frenchman at one point suggested on the radio to get Alonso give him DRS, so that he can keep Gasly behind for 3-4 laps, otherwise without the tactics, the Frenchman would have pass them easily.

“It was fun and we pushed team co-operation to the limit, so what happened is that we switched positions with Fernando once,” said Ocon to written media. “He was in front then Gasly caught up to us and then I said on the radio that it would be good if Fernando could give me DRS to try and keep Gasly behind and he straightaway he did so.

“He changed his line into the last corner, so I could keep the inside and not have dirty air, and then be close to him on the exit. We basically managed to keep Gasly behind for 3-4 laps which he would have passed straightaway if we didn’t do any tactics like that. We tried to give him a hard time. When he was next to me, Fernando pulling in front of him, so he had dirty air.

“We just worked two against one at the moment and as I said, it is pushing the limit on what you can do tactics wise and it is a big effort. I had a lot of fun being racing that hard, it was hard but fair but we have shown how strong the team spirit is and how ready we are to take the fight till the end. We would be happy in having half a second more pace per lap, we work with what we have at the moment,” summed up Ocon.

Likewise Alpine teammate Alonso described how fast he was on Sunday and how they both had to work together. At the start of the race, he did not want to overtake his teammate in order to hold back opponents who came behind and to attack Gasly.

“I didn’t say I was faster than Esteban,” said Alonso. “Team told me the lap time and I know that I was very fast but I was very fast in sprint qualifying but I had a terrible start. I was very fast in Mexico as well, so I don’t know why my car, my set-up works very good on Sundays and even with this safety car periods, I was able to catch the cars in front and then you’ll never attack your teammate probably, because you have to run very close to the other car and you’ll damage the tyre, so you don’t want to put that situation.

“Maybe at the beginning of the year, you may try but now we want to score points with both cars, that’s our main strength as a team. We are fighting with a very fast AlphaTauri but they have one car and we have two cars. So we cannot do anything with ourselves. I had recovered like 10s, so as I said my car was very fast but no it is ok, for the team it is the same points, eighth and ninth or ninth and eighth, he gave me the position and I am happy to give back,” summed up Alonso.

The Alpine teamwork displayed how much the two drivers want to help the team rather than maximize individual results. Both managed to finish eighth and ninth to match Gasly’s score and help itself remain ahead in the championship even though they are tied on points.

On the other hand, Gasly took the opposite path, he showed a strong performance in Friday’s practice but struggled in the Sprint race and Sunday’s race, He has done above the expectations for the Frenchman – who ended up in 13 of the 19 GPs of the season.

Gasly had his work cut out and had to be smart to clear both the Alpine drivers. “It was a very busy afternoon and I am really happy with this P7 because there was lot of hard work and battles on my side, really enjoyed this race, just fighting the entire race, and lot of nice overtakes on Seb and Lando, and the two Alpines. It is not every race that you get to fight with a double champion, so it was hard and we came on top, and keep the fight in the championship alive,” he said.

“The fight with the Alpines, it was very fine margin. I had to be smart as well, they played well, the two cars together, they were giving DRS to each other. It wasn’t easy but I tried to play it smart and I am really happy it worked out but I think we will have more in future,” summed up Gasly.

The story was co-written by Oprah Sagal