All the drivers went on track as soon as the light went green. Mitch Evans, one of the few drivers who had already raced on this track, was the first driver to set a flying lap but his time was immediately beaten by several drivers, especially ART GP. Then the three men of the championship were the fastest on their first flying lap, Pierre Gasly leading from Antonio Giovinazzi and Raffaele Marciello.

During his second flying lap, Gasly lost control of his car in T12, spun and avoided the gravel trap by a few inches. All the drivers came back into the pits following that incident except Gustav Malja who could enjoy a clear track but could not benefit from it after a mistake.

Driver went back for seven minutes to set a new time but Evans lost the rear at T1 following a brake failure and hit the tyre wall. The red flag had been deployed to retrieve the car of Evans.

All the drivers went straight on track except Prema driver who waited a bit not to be stuck in traffic. But as Nobuharu Matsushita spun at the last corner, no one was able to improve their time. 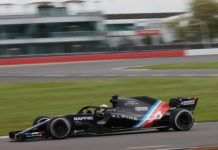