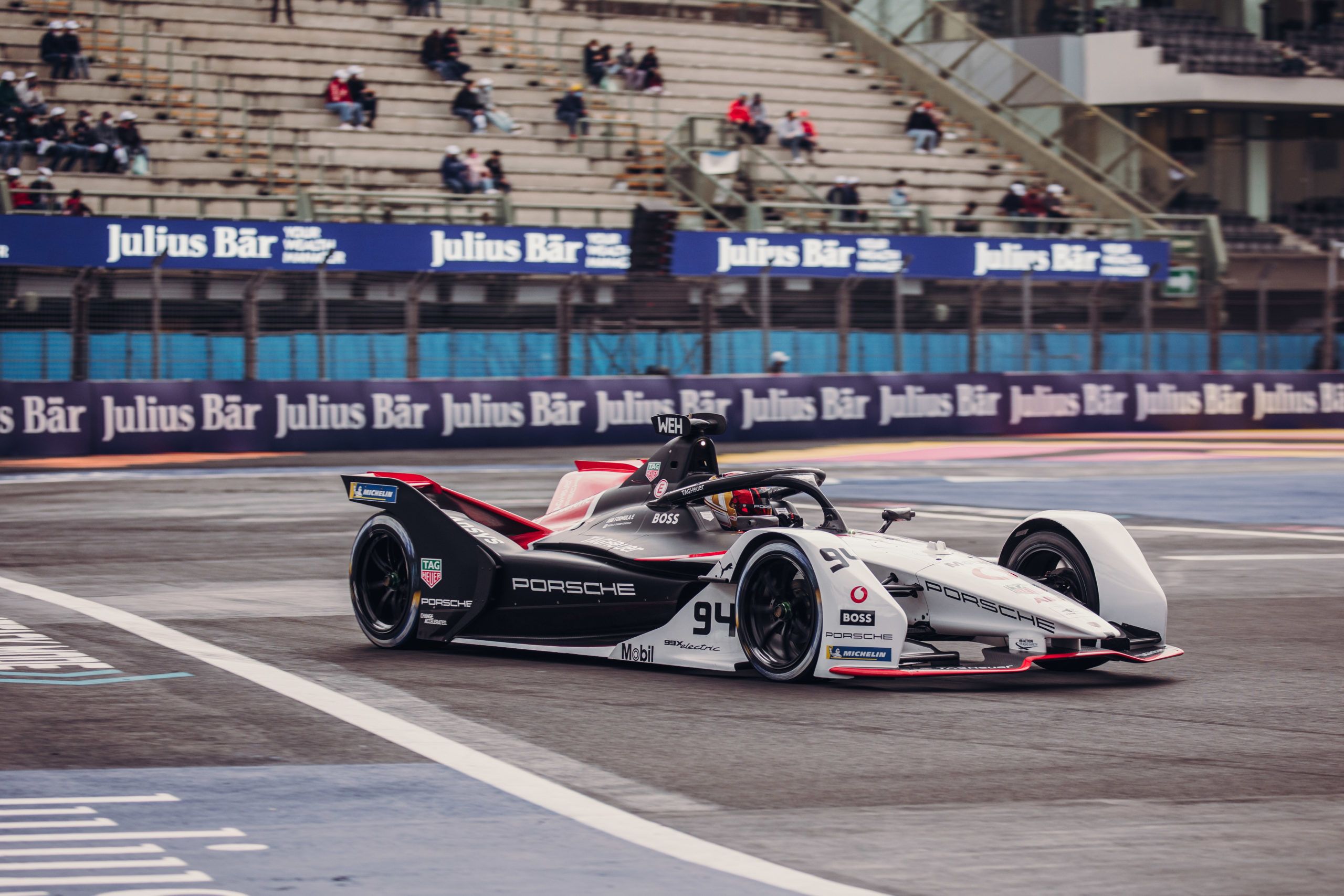 Porsche ended up a 1-2 in Formula E Mexico City EPrix as Pascal Wehrlein took the win from Andre Lotterer and Jean-Eric Vergne.

Mercedes’ Nyck de Vries was sixth ahead of Envision pair of Robin Frijns & Nick Cassidy, with Mercedes’ Stoffel Vandoorne ninth and Nissan’s Maximilian Guenther rounding the Top 10. The start was yellow-flagged due to a stoppage for Mahindra’s Alexander Sims.

As things settled down, Mortara wasted no time to get through Wehrlein for the lead with the German also losing out Vergne for second. He earlier passed Lotterer for third with da Costa sneaking past the German for fourth, but he couldn’t hang on for long.

Da Costa touched the rear of Wehrlein when the Porsche driver went for Attack Mode and damaged his front wing which dropped him to sixth in the order allowing Lotterer and Frijns to pass him. Vandoorne was seventh still with Venturi’s Lucas di Grassi up in eighth.

De Vries dropped to ninth from sixth as Jaguar’s Mitch Evans made it up to 10th. As Mortara led the way, Vergne started to lift and coast due to less energy as he lost out to both the Porsche cars and also Frijns to be fifth from teammate da Costa.

In fact, the Porsche duo were on charge as both Wehrlein and Lotterer passed Mortara to be 1-2 with more usable energy. The Venturi driver was left to defend against Frijns, who had similar energy level to the Swiss driver ahead but had better pace than him.

After trying for several laps, Frijns eventually passed Mortara for third with teammate Cassidy’s strategy of late Attack Mode brought him up to seventh from 10th in the standings. Vandoorne dropped to eighth from Evans and Mahindra’s Oliver Rowland.

After the loss of his teammate, Rowland fought his way through to the Top 10 as lead battle intensified between Wehrlein and Lotterer. They had a good gap to Frijns who led Mortara, Vergne and da Costa while Cassidy’s strategy turned the opposite way.

He lost seventh to Vandoorne due to his Fan Boost but he eventually dropped outside the points with less energy. Evans was up to eighth from Rowland after their battle, with Jaguar’s Sam Bird in the Top 10 after both Cassidy and de Vries dropped out.

It all started to go wrong for Evans, Bird and Rowland with no energy left at their disposable. At the front, it was a formation finish as Wehrlein led Lotterer in a Porsche 1-2 for Mexico City EPrix as the German manufacturer registered their first Formula E win.

It was a valiant effort from Frijns as less energy meant he was forced out of the podium with Vergne taking third from da Costa and Mortara. Frijns was seventh after de Vries brought himself back into the Top 10 to be sixth in the order.

Di Grassi was eighth but he is under investigation along with de Vries for their collision. The Nissan pair scored double points with Sebastien Buemi ninth and Guenther 10th as Andretti’s Jake Dennis missed out in 11th from Vandoorne and Cassidy.

A 5s time penalty for di Grassi dropped him outside the points in 12th with Buemi and Guenther in eighth and ninth, whereas Dennis was 10th from Vandoorne.