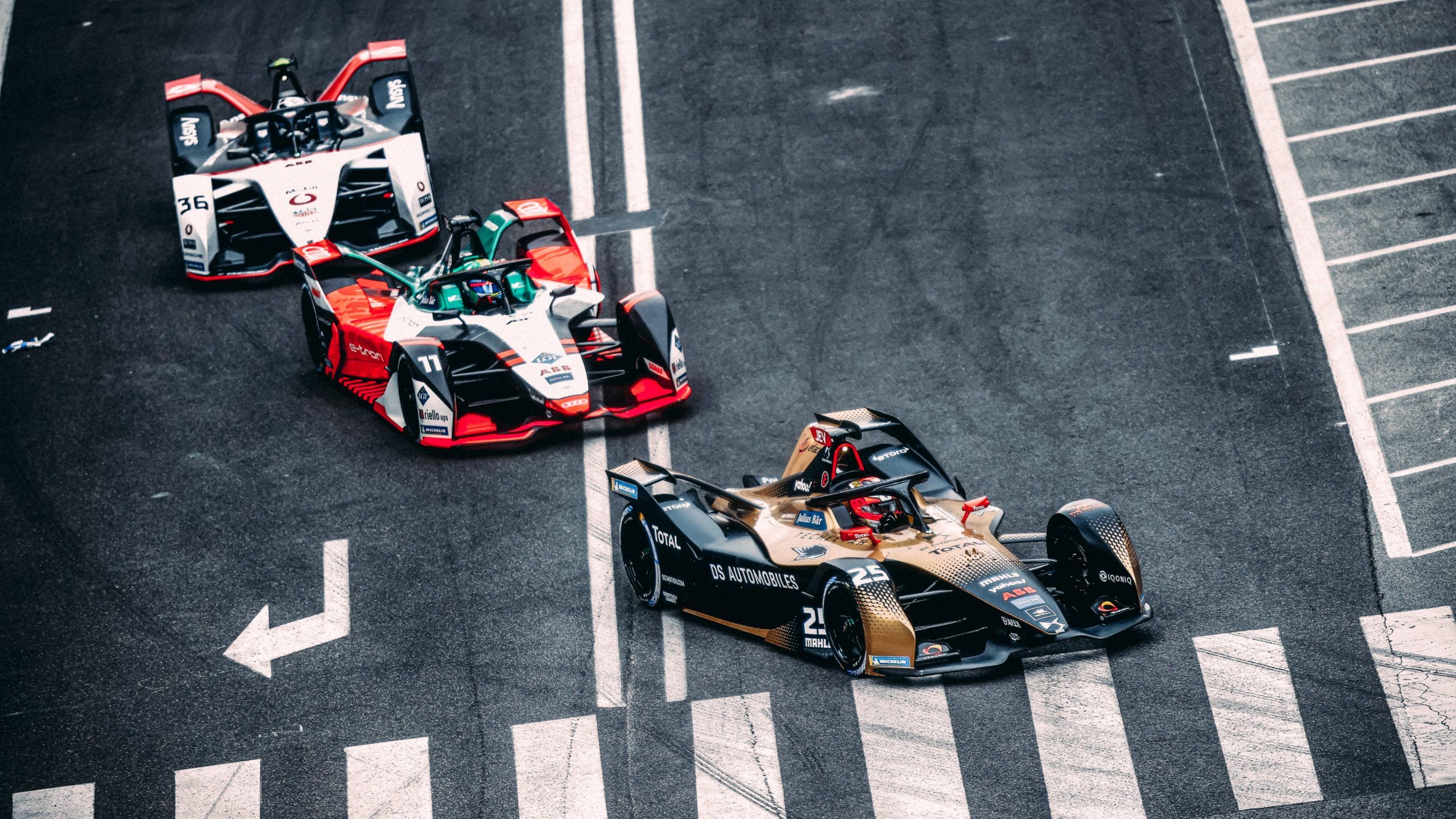 DS Techeetah’s Jean-Eric Vergne made the most to win Race 1 of Formula E Rome EPrix from Jaguar duo of Sam Bird and Mitch Evans.

The Top 10 then had Envision Virgin’s Robin Frijns ahead of Mercedes’ Nyck de Vries, Porsche’s Pascal Wehrlein, Nissan’s Sebastien Buemi and Jaguar’s Sam Bird. After initial couple of laps behind the safety car due to wet conditions, it was green then.

It wasn’t a clean start, though, as Lotterer tried a move on Vandoorne for the lead but the two collided to drop down the order. It gave Rowland the race lead but the British racer was put under investigation for extra power usage under the safety car.

Nevertheless, Rowland led the Formula E Rome EPrix from di Grassi and Vergne in the Top 3, ahead of Frijns, de Vries, Wehrlein, as Lotterer slotted in seventh, from Bird, Buemi and BMW Andretti’s Maximilian Guenther in the Top 10.

There was a brief yellow flag for Mahindra’s Alexander Sims, who retired from the Formula E Rome EPrix, as he was followed by Venturi’s Edoardo Mortara in the retirement list. After the heavy impact in practice, NIO’s Oliver Turvey did not manage to start the race.

After a drive-through penalty for Rowland, it dropped him to the back of the grid, as di Grassi led the way from Vergne and Frijns. An Attack Mode use saw the Brazilian drop to third but he was back in lead after others around him took it too.

In fact, di Grassi forced his way past Frijns, who also lost to de Vries, after he climbed his way up the order. But the Brazilian had both Vergne and the Dutchman with him for most of the race. The Attack Mode allowed the Frenchman to take the lead.

He led di Grassi, who bumped hard on de Vries while behind him. Bird was up to fourth in all of the fights as he fended off Vandoorne, Jaguar’s Mitch Evans and also Frijns – the Dutchman losing out the most after fighting in the front early on.

Wehrlein stood seventh from Buemi, DS Techeetah’s Antonio Felix da Costa and Audi’s Rene Rast in the Top 10, as Lotterer was handed a five-second penalty for causing a collision. There was a yellow flag for both Dragon’s Sergio Sette Camara and BMW’s Jake Dennis.

The former managed to re-start the car, but for Dennis, it was a retirement. At the front, di Grassi started to press on Vergne and he did it, but the Brazilian’s drive-shaft failed on him eventually. He started to slow down as the Frenchman took the lead.

While avoiding di Grassi, Vandoorne hit a bump and spun across, where de Vries hit him straight on. It resulted in a Full Course Yellow, which converted to full Safety Car. Both the Mercedes drivers were forced to retire as Vergne led Bird and Evans in the Top 3.

Replays showed a spin at the same corner for Guenther too, which dropped him from Top 10 to the back end of the field. The race, though, ended under the safety car, with Vergne winning Race 1 of Formula E Rome EPrix as Jaguar took a double podium.

It was Bird in second from Evans, with Frijns in fourth ahead of Buemi, Rast, Wehrlein, Lynn, Lotterer and Guenther in the Top 10. But a penalty for Lottrer dropped him outside of the Top 10, helping Envision Virgin’s Nick Cassidy to end up 10th.