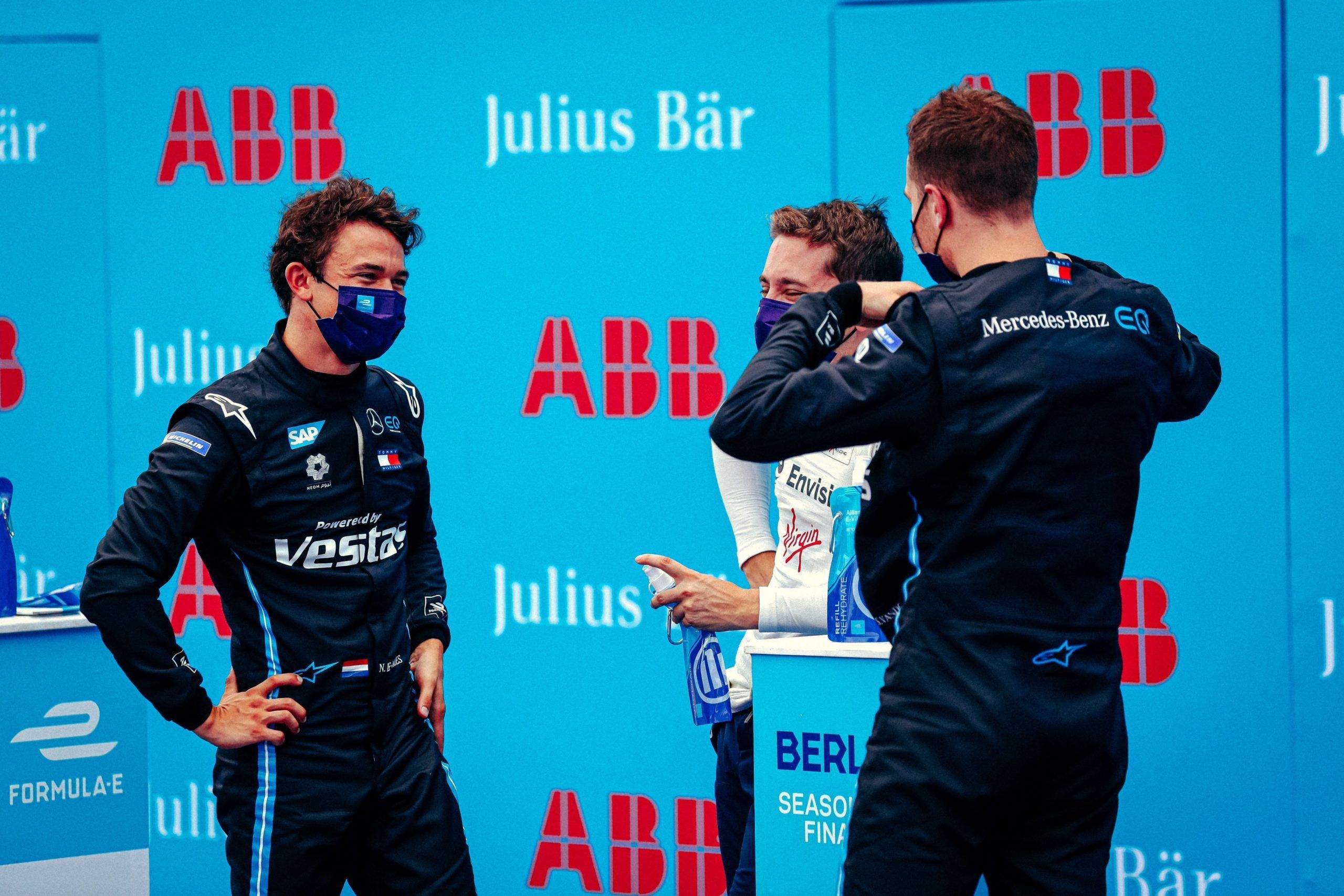 Pole-sitter Mercedes’ Stoffel Vandoorne made a good start in the final Formula E race of the 2019/20 season in Berlin to lead the way from Nissan’s Sebastian Buemi and Audi’s Rene Rast in the Top 3. The German, though, came under pressure from behind.

Mercedes’ Nyck de Vries hurried him on and eventually made the move to take third as Rast held off Venturi’s Edoardo Mortara in the Top 5. Envision Virgin’s Robin Frijns was sixth with Mahindra’s Alex Lynn seventh from Porsche’s Neel Jani.

The Top 10 had GEOX Dragon’s Sergio Sette Camara and Audi’s Lucas di Grassi as they both gained a place each after Jani dropped to 10th. Up ahead, Frijns made a move on Mortara for fifth as Lynn tried to chase him as well.

Outside the Top 10, BMW Andretti’s Maximilian Gunther made up places to be 15th with DS Techeetah’s Jean-Eric Vergne 16th as his teammate and new Formula E champion Antonio Felix da Costa steadied in 17th and Nissan’s Oliver Rowland in 22nd.

The front of the field was still headed by Vandoorne from Buemi and de Vries but both the Mercedes drivers used both their Attack Mode along with the Swiss racer before the halfway mark as Rast headed Frijns in the Top 6.

Di Grassi gained more places to be sixth with Lynn in seventh where Mortara dropped to eighth and Camara to 10th as Envision Virgin’s Sam Bird up to ninth. The Monegasque and the Brazilian dropped out as Gunther and Vergne got themselves into the Top 10.

While Formula E Race 5 winner Rowland retired after shedding but of carbon on the track, teammate Buemi came under tremendous pressure from di Vries using Fan Boost but the Swiss racer hung onto second as Bird passed Lynn for seventh.

As Vandoorne led the way, de Vries made it Mercedes 1-2 after passing Buemi, who came under pressure from Rast. Another big moves was Bird was passed teammate Frijns to be fifth as the Dutchman lost out to di Grassi as Vergne moved up to seventh too.

Lynn stayed eighth with da Costa moving up to ninth and Mortara back to 10th as Frijns got a puncture after a tangle with Gunther, who also dropped out of the Top 10. It was clean at the front though with Mercedes ensuring a 1-2 finish to end the 2019/20 season.

Vandoorne took it to score his first as he ended up second in the championship as well with de Vries was second from Buemi with the Swiss racer holding off Rast, with Bird a distant fifth from di Grassi, Vergne Lynn, da Costa and Mortara in the Top 10.

Jaguar’s Mitch Evans missed points to be 11th as Gunther ended up 12th with his teammate Alexander Sims 13th from Porsche duo Andre Lotterer and Jani as Felipe Massa ended his Venturi stint in 16th – the announcement coming just after the race.

“Leaving a team is never an easy decision to make,” said Massa. “We’ve made some good memories together and it’s given me the opportunity to learn something completely different from what I’m used to, so first of all I want to thank [Venturi President] Gildo [Pastor] and [Team Principal] Susie [Wolff] for their faith in me.

“It’s been an honour to be part of the only motorsport team from the Principality, and representing them on the podium at the Monaco E-Prix was a definite highlight for me. The past two seasons have been a big learning curve for us all and unfortunately, for various reasons, we haven’t quite achieved what we hoped.

“Despite that, it’s been a lot of fun and I wish the team nothing but the very best of luck for the future. I look forward to announcing my future plans in due course.” It is unclear if Massa will stay on in the Formula E series or switch teams.