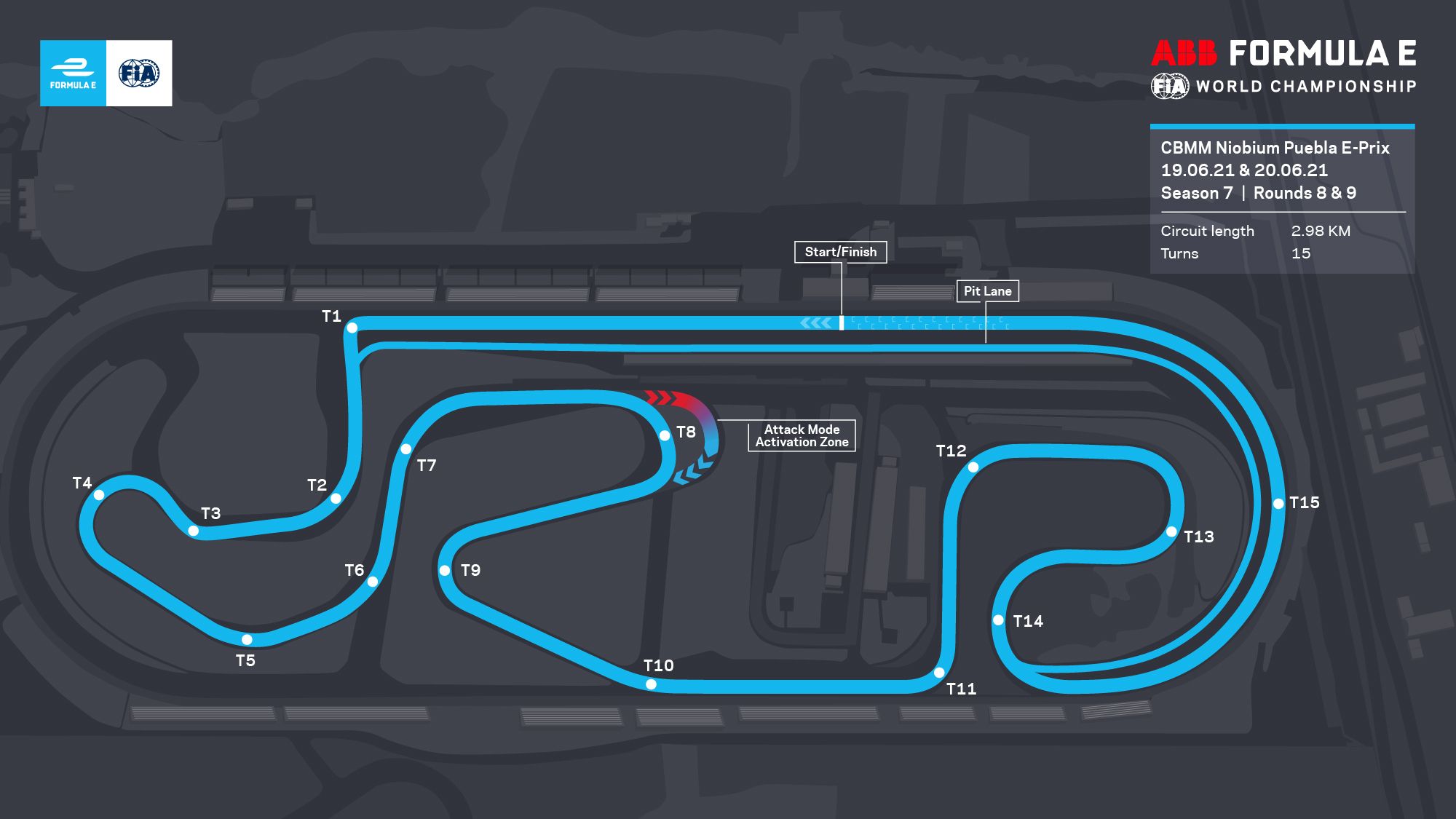 Formula E has shared the first look of the configuration of the Puebla circuit, which will host the Mexico double-header this weekend.

With the Autodromo Hermanos Rodriguez F1 venue, which hosted the previous Mexico Formula E races, not available, due to it being a temporary hospital in response to COVID-19, the electric racing series opted for Puebla as the 2020/21 host.

It is another permanent circuit in Mexico, which has hosted the World Touring Car races in the past. Formula E, however, will not utilise the same configuration as WTCC, after they shared the first look of the new 1.85 mile anti-clockwise circuit.

Amid the changes for Formula E, the first comes at Turn 3, where the electric series will follow a tighter hairpin and re-join the main circuit at Turn 6. It won’t use the outer oval part, but the inside loop, as they will encounter a banked run in the final corner.

Formula E is also introducing a ‘joker lap’ – similar to World Rallycross – for the Attack Mode, situated at Turn 8. “At the Autodromo Hermanos Rodriguez, there is a hospital at the moment but we really wanted to keep Mexico on the calendar,” said Alberto Longo.

“We decided to go only one hour and a half away from from Mexico City to the amazing city of Puebla. We thought it was a fantastic opportunity for Formula E and there is a lot of passion for motorsport there and there’s a big car industry in Puebla – that was a key aspect in us heading there. We’re really looking forward to have the fans back at our races, and we’ll have thousands of guests back in the grandstands.”

Touring car racer Tiago Monteiro added more about the Puebla circuit, where he has driven in the past. “I’ve been there, although quite a long time ago – maybe 2008 or 2009,” he said. “The altitude is very high. Mexico City is already quite high, but we’re going even higher, on a very, very big volcanic plateau and you can feel it.

“So, every day you can feel that kind of a little bit of lack of air and the tiredness. With a combustion engine, you would feel it in the car as well but that shouldn’t happen with Formula E cars. The track is interesting, and has a low-grip Tarmac surface. Back when I drove it, it felt almost like ice – it was really challenging.

“I’m not going to tell everybody the secrets not! But I have a few tricks that I remember and will keep those for Antonio. He’s quite capable of doing a good job on his own, though and he knows very well how to adapt to new tracks as well. I think the biggest challenge will be for the driver, breathing wise and maybe tiredness – and keeping your head cool. I remember we could feel it.”