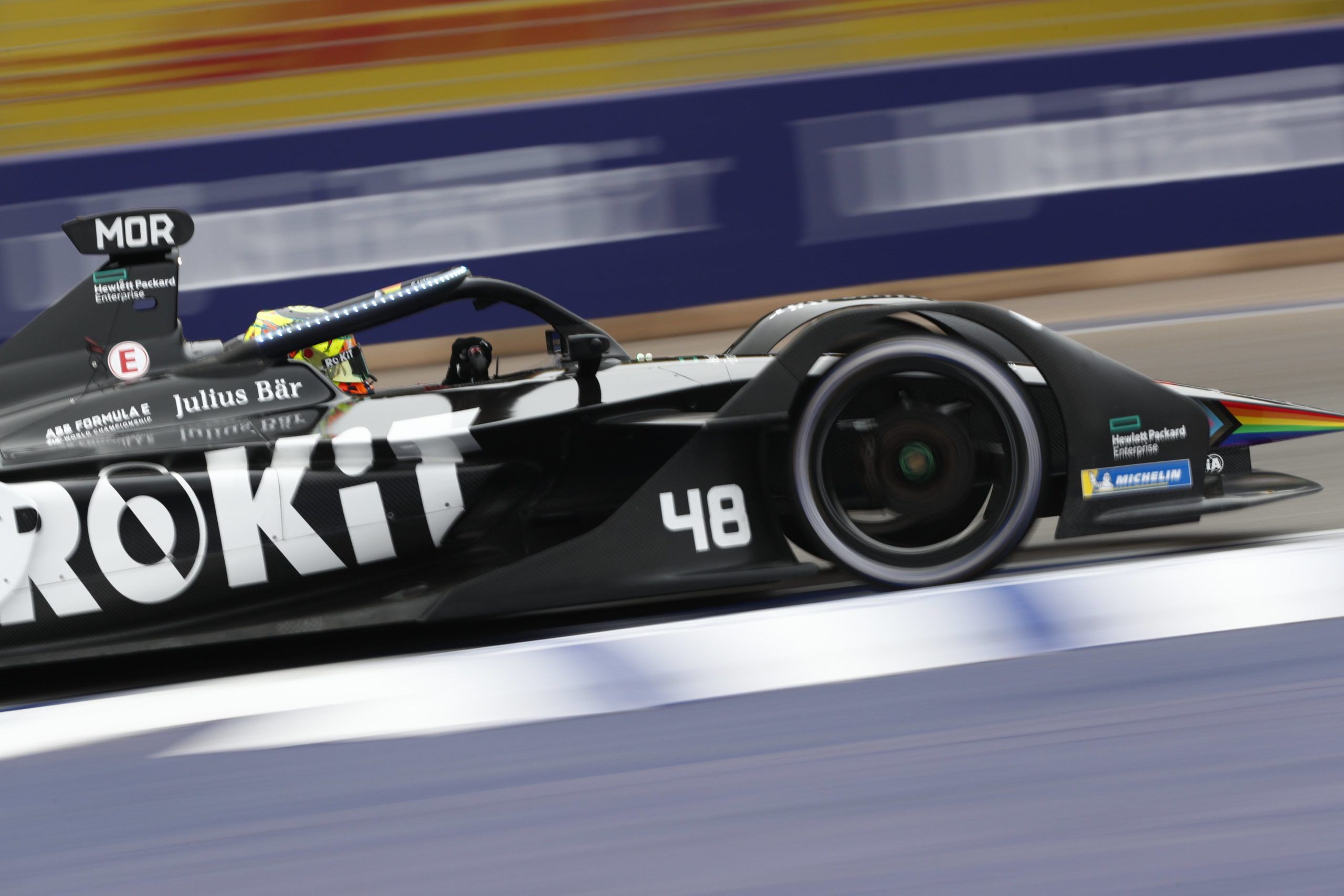 The lead trio – headed by polesitter da Costa – filed through Turn 1 as they were despite a poor start for Mortara, while Evans fell from fifth to sixth with Porsche’s Pascal Wehrlein squeezing by. The Kiwi tried to bite back into Turn 3 with no room to breath between the German and the wall but had to settle into the train in sixth spot.

That battle raged throughout the opening two tours, with Evans gesticulating, clearly unhappy at Wehrlein’s defensive manoeuvres but the Jaguar driver did make a move stick at Turn 12 – unconventional but vital with a growing, two-second gap between da Costa, Mortara, Vergne, Dennis and Evans in fifth.

Meanwhile, de Vries made a move stick to pinch ninth from di Grassi – completely sideways under braking but well held and more provisional points to the reigning champion’s name.

On Lap 4, both DS TECHEETAHs activated their first mandated 30kW, three-minute boost of the race in ATTACK MODE – the first drivers to do so with a school of thought that it’s more efficient to put more energy through the battery and powertrain while it’s cooler early on. A lap later, Mortara made the jump – as you were with the Venturi driver filtering back into second.

Evans, meanwhile, lost a spot to Rowland through the first activations, with the Brit also jumping countryman Dennis for a net fourth position. The Yorkshireman’s progress continued on Lap 7 as he dispatched Vergne for a net third through the second round of ATTACK MODE. Evans followed to shuffle his fellow title protagonist down to sixth.

On Lap 9, Rowland had his sights on second and the back of da Costa’s DS. He did make it by, briefly, but nudged the Portuguese E-TENSE and was told to cede the position by his team. He wouldn’t have to wait long to make it by for good though, taking second spot at Turn 10.

With all bar Evans of the top runners having taken both their doses of ATTACK MODE, it was Mortara who’d profited to take the lead from Rowland who was on a real mission. Da Costa followed with Evans fourth and Vergne fifth while Dennis rounded out the top six.

Evans’ strategy looked to be paying off, though, with his late jump for that second 30kW boost seeing him by both da Costa and Rowland, and the former also shuffling by the latter in the mix. The Jaguar driver now had eyes on leader Mortara at less than half a second back.

A little further down the order, di Grassi showed why he can never be ruled out with a well-timed lunge on de Vries to pinch seventh on Lap 15.

Vergne had taken a slightly different strategy after slipping to the cusp of the top six. Back in the pack a little, the Frenchman had managed to save a couple of percent’s usable energy on the leaders. After dispatching Dennis for fifth, his eyes were firmly forward with 20 minutes plus one lap to run.

Formation flying from the DS pair saw da Costa slice by Evans and Vergne by Rowland for second and fourth, respectively, into Turn 1 on Lap 18. DS’ Team Principal Thomas Chevaucher looked more than pleased with that back in the garage.

Further progress followed for Vergne, who was measuring things beautifully. The Frenchman took Evans for third at Turn 1 on Lap 21, and set about chasing teammate da Costa for second and leader Mortara.

The battle for the championship lead looked to have kicked up a notch as DS told Vergne he could pass his teammate for second at Turn 7 on Lap 24. With JEV having two percent more usable energy in his battery than leader Mortara, he had every chance of taking the win and the lead in the Drivers’ World Championship.

That wouldn’t quite work out for the Frenchman, though, and on Lap 29 Vergne gave back the spot to da Costa who felt he had a shot at taking the lead from the Venturi out front.

That left a straight fight between Mortara and da Costa for the win and it looked as if the Swiss-French-Italian had the measure of the Portuguese. Vergne, in third meanwhile, was tasked with fending off a feisty Evans for the final spot on the podium. He couldn’t do so, as the New Zealander made it by around the outside of Turn 3 while Mortara took the chequered flag and the top step.