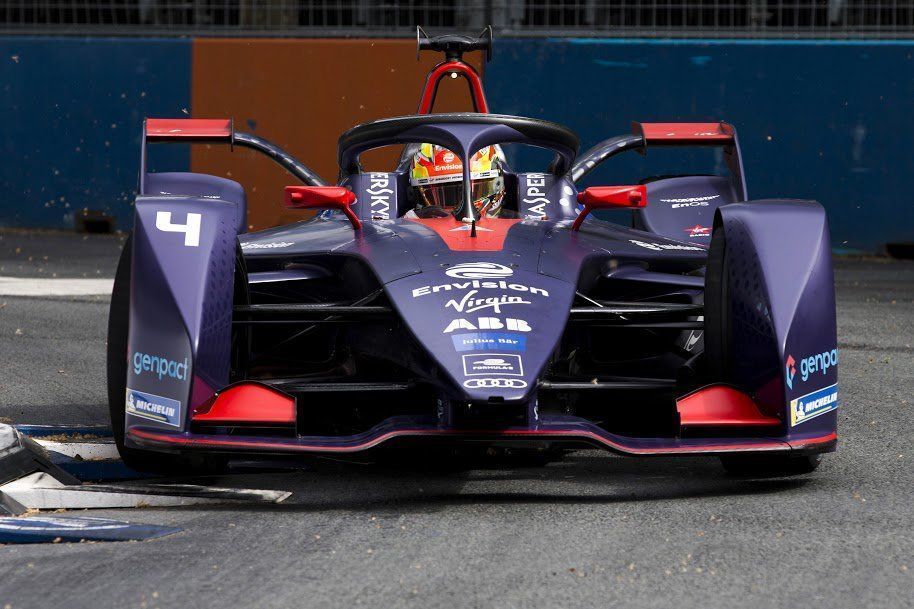 The FIA Formula E Championship’s Paris EPrix had nothing short of drama as Envision Virgin’s Robin Frijns registered his first-ever win and became the eighth different winner of 2018/19.

With the cancellation of their fast times, Mahindra Racing duo of Jerome D’Ambrosio and Pascal Wehrlein started the Formula E Paris EPrix from the last row as Nissan e.Dams’ Oliver Rowland and Sebastian Buemi headed out from the front-row.

It was an anti-climatic start as they ventured behind the safety car due to certain wet patches on the circuit. After few laps behind, the safety car eventually pitted as Rowland led the way from Buemi and Envision Virgin’s Robin Frijns.

But it wasn’t for long as Rowland locked-up in the left-hander and went straight into the barrier, handing the lead to Beumi. The British racer re-joined the track but was already quite a way behind the last car of GEOX Dragon’s Jose Maria Lopez.

As Buemi led the way, the Swiss driver soon came under pressure from Frijns as DS Techeetah’s Andre Lotterer climbed his way up to third after passing GEOX Dragon’s Maximilian Gunther and Venturi’s Felipe Massa.

Just as Frijns hounded Buemi, the Swiss driver pitted with a suspected problem with the Dutchman taking the lead from Lotterer and Massa. It wasn’t it for dramas in the Formula E race as it started to rain in pockets, further hampering the already difficult race.

It was crazy in the wet conditions with multiple collisions involving multiple drivers which forced the stewards to put the race under safety car period after double Full Course Yellow periods. In all the mayhem, Frijns continued to lead from Lotterer.

But Massa lost out after his spin with Abt slotting in third from teammate di Grassi and Gunther. The rest of the Top 10 had DS Techeetah’s Jean-Eric Vergne sixth, followed by BMW Andretti’s Antonio Felix da Costa, D’Ambrosio, HWA Racelab’s Gary Paffett and Lopez.

The race re-started with less nearly two minutes remaining but there was another FCY when D’Ambrosio hit the tyre barrier while battling with da Costa for track position. It allowed Frijns though to secure his first Formula E race win.

The Dutchman also became the eighth different winner of 2018/19 season from seven teams as Envision Virgin scored their second victory. The wait for his first win continues with Lotterer again ending up second as Abt rounded out the podium positions.

It ended up being a good day for Audi with di Grassi in fourth as Gunther registered his best result in fifth as Vergne climbed up to sixth, with da Costa in seventh ahead of Paffett, Massa and Wehrlein in the Top 10.

While his teammate took the win, Bird was 11th after multiple collisions with Rowland eventually scrapping through to 12th ahead of Lopez and NIO’s Oliver Turvey. Buemi and Jaguar’s Mitch Evans were classified in 14th and 15th but they finished a lap down.