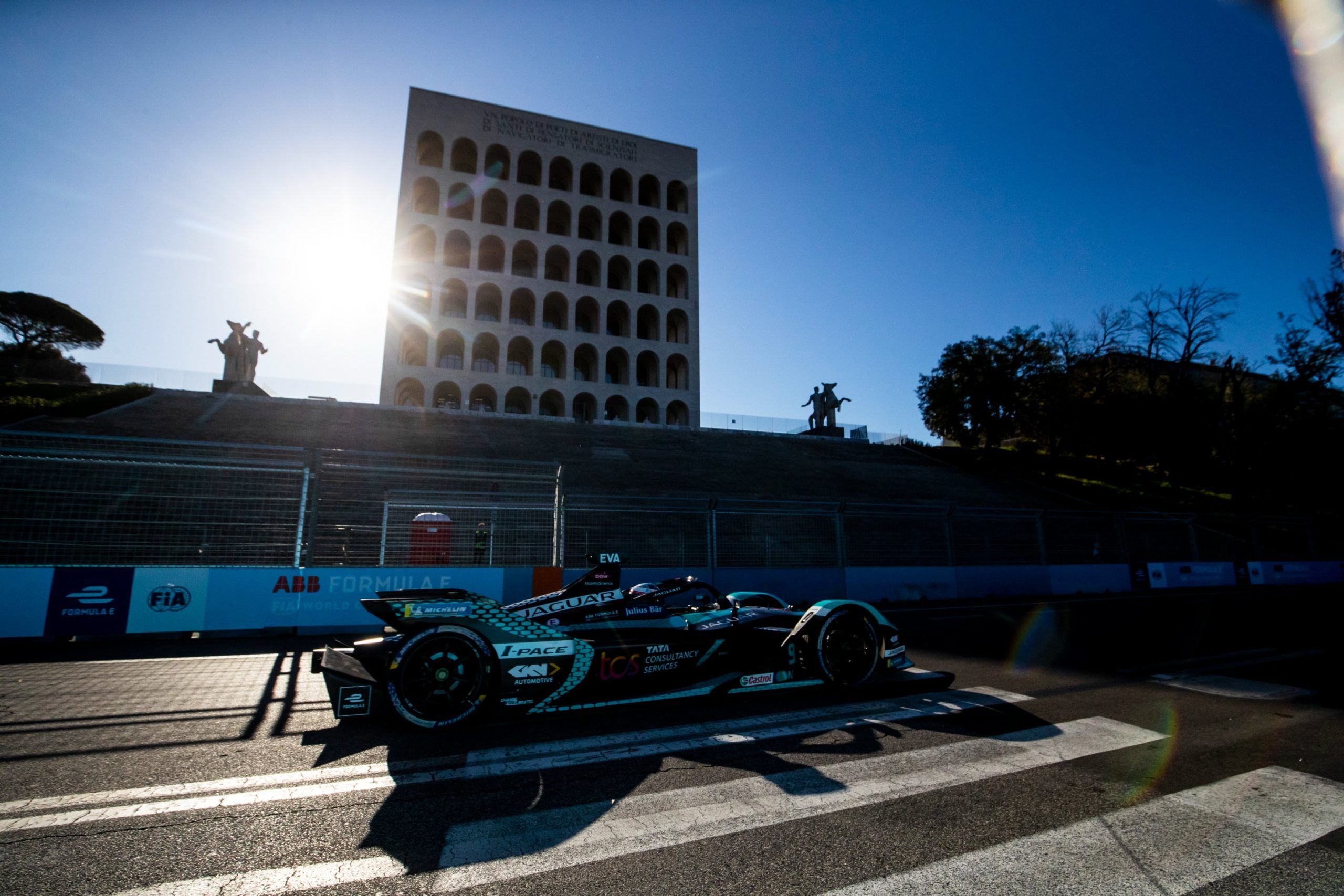 It was a clean start in Race 2 of Formula E Rome EPrix weekend as pole-sitter Jean-Eric Vergne led the way in his DS Techeetah from Andretti’s Jake Dennis and Porsche’s Andre Lotterer in the Top 3. The German tried a move on the Brit but it didn’t stick.

The first move came from Lotterer on Dennis who passed him at Turn 7 to be second, with Evans following him on. In fact, the Kiwi also got the German to take second in his chase of Vergne. Behind, Frijns cleared Bird for fifth place.

At the fag end of the Top 10, Camara lost to both Venturi drivers Edoardo Mortara and Lucas di Grassi. The duo then charged towards da Costa, with the Portuguese defending hard at Turn 1 which put Mortara in a spot of bother and shedding carbon fibre.

The hit allowed di Grassi to go through as Mortara eventually retired after hitting the wall. No sooner, Dragon’s Antonio Giovinazzi stopped on track which resulted in a safety car period. The re-start gave Evans a chance to pass Vergne and he did so.

Vergne covered the inside line but Evans blasted past him on the straight to lead the Formula E Rome EPrix weekend’s Race 2. Lotterer steadied in third but there was a big fight behind with Frijns, Dennis, Wehrlein, Bird and Vandoorne involved.

Frijns got himself up to fourth with Bird coming through to fifth from Vandoorne, Dennis and Wehrlein after contact between them during the move. The Porsche driver lost ground in all of this along with the Andretti driver, who seemingly cleared going off-track.

As the Attack Mode started to flow in, in the front, Frijns was the driver on the move after he passed Lotterer, Vergne and Evans in succession to lead the Formula E Rome EPrix’s Race 2. Lotterer passed Vergne for second with Evans down to third.

Bird was fourth from Vergne with Vandoorne in sixth from Dennis, Wehrlein, da Costa, and di Grassi in the Top 10. Among them, da Costa was handed a 5s penalty for causing a collision with Mortara, as a brief yellow was waved for Mahindra’s Oliver Rowland’s DNF.

There was more misery for Mahindra as Alexander Sims stopped too to retire which resulted in a safety car period. Before that, Lotterer passed Evans to be another leader of Formula E Rome EPrix’s Race 2, with Evans retaining third.

The re-start saw Evans on the charge using his Attack Mode as he passed Vergne, Frijns and Lotterer to once again take the lead of Formula E Rome EPrix’s Race 2. Vergne passed Lotterer to second with Frijns dropping to fourth in the order.

Vandoorne stood fifth from Bird, di Grassi, Cassidy, di Grassi, Wehrlein and Mercedes’ Nyck de Vries in the Top 10, where the Dutchman had a 10s time penalty for causing a collision with Camara. There was another safety car period after Cassidy binned into the wall.

The re-start worked well for Evans who made it two in two in Formula E Rome EPrix, with Vergne having to settle for second after he couldn’t use his Fan Boost. Frijns rounded out the podium from Lotterer and Vandoorne in the Top 5.

Wehrlein ended up sixth from NIO’s Oliver Turvey who benefited from mayhem for others, with di Grassi finishing eighth despite a late 5s penalty for causing a collision. Nissan e.dams’ Sebastien Buemi was ninth from Andretti’s Oliver Askew in 10th.

Both gained for penalties and retirements to other Top 10 runners, with NIO’s Daniel Ticktum in 11th from Nissan e.dams’ Maximilian Guenther, Camara, da Costa and de Vries – where the latter two dropped places due to time penalty added.