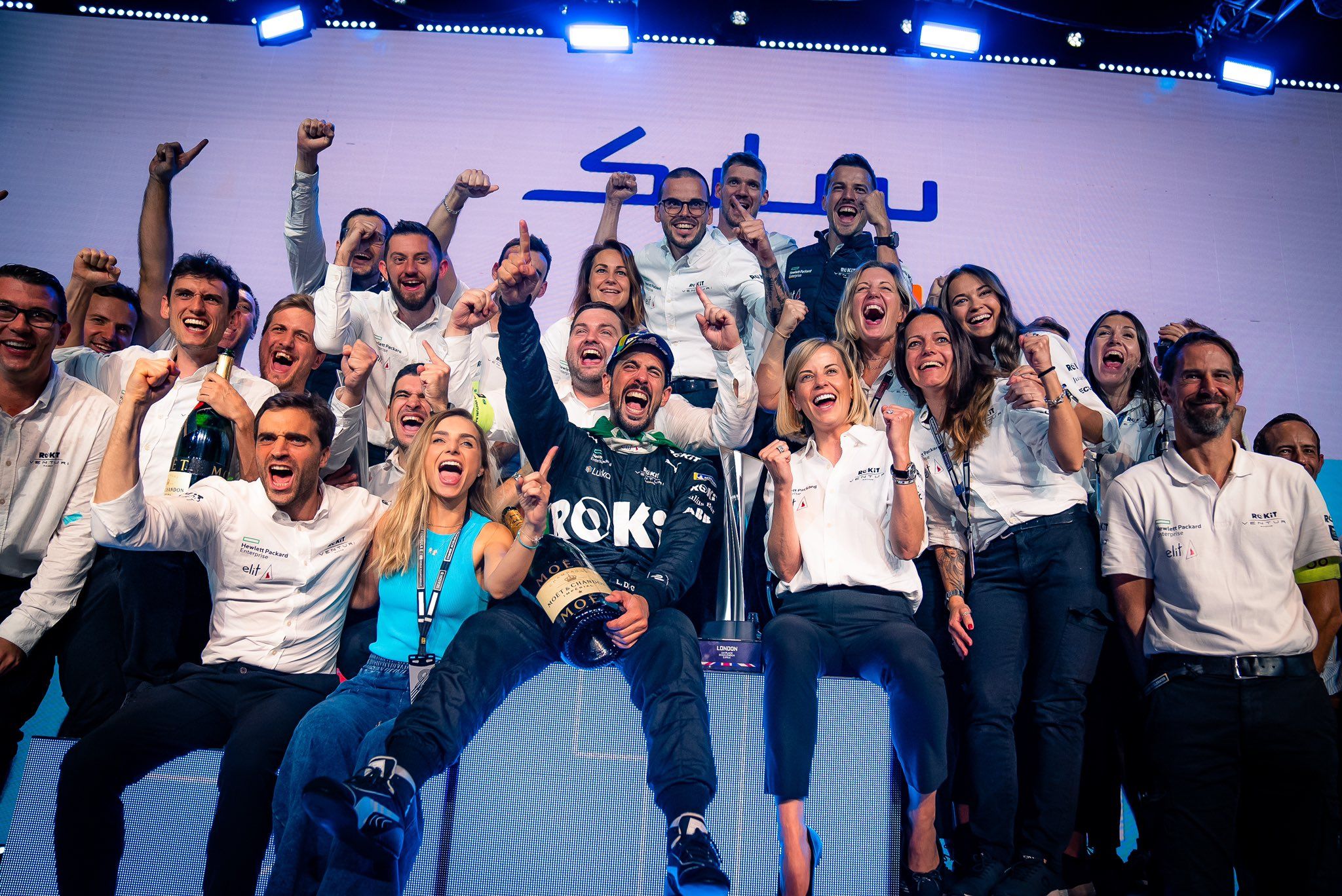 The pack emerged from the darkness indoors to the light of the Docklands with Dennis ahead of di Grassi and Giovinazzi clear of da Costa in third. Some contact between Mahindra’s Oliver Rowland and Oliver Askew in the Avalanche Andretti left the former damaged and out while Vandoorne clipped Wehrlein’s Porsche into the complex on the way to taking 12th. The top nine stood as you were on the grid.

Five minutes in and Jean-Eric Vergne’s title challenge looked to have all but ended after contact – the DS TECHEETAH coming to a sorry halt out on-track, meaning an appearance for the Porsche Taycan Safety Car. The five-minute neutralisation came to an end on Lap 5 and de Vries took the opportunity to dive for ATTACK MODE – the first driver to do so. Three four-minute doses of ATTACK MODE were on the menu for race two.

Giovinazzi had the elbows out on Lap 7 to fend of da Costa at Turn 2 – the DRAGON driver holding on for everything he’s worth to that third place, with da Costa losing out to de Vries in the melee. Through the first round of ATTACK MODE saw Giovinazzi shuffled to fifth before the Italian was slapped with a drive-through penalty for overpower – gutting for driver and team. The net beneficiary looked to be Evans, who’d clambered through the field as high as fifth from 13th. Frustratingly for him, Vandoorne had also made ground to seventh.

On Lap 14, Dennis led di Grassi with da Costa able to slip beyond de Vries for third with Evans fifth, Buemi sixth, Vandoorne seventh, Wehrlein eighth, Bird ninth and Mortara rounding out the points-paying positions in 10th. The race leader made the jump for his second 30kW boost, ceding the lead to di Grassi in the process but the Brit clung on to the back of the Venturi Silver Arrow 02. The lead pair had pulled a two-second gap on de Vries who’d retaken third from da Costa in the interim.

Lap 20 saw Evans by da Costa and into fourth, though again, Vandoorne wasn’t far behind in his shadow – the Mercedes driver now sixth. Meanwhile, di Grassi went for his final jump through the ATTACK MODE loop with Dennis holding one in hand. A fascinating tactical battle ahead. The Brazilian tried to pile on the pressure with that extra power in his pocket but Dennis defended hard and held the Venturi driver at bay and di Grassi wasn’t quite able to get within range of a move.

An overambitious move from Mortara sent his title chances spinning as he tried to make it by Bird for ninth. Vandoorne, meanwhile, was busy consolidating his advantage with a move on da Costa for fifth. Evans now being just a position ahead ensured he wouldn’t eat into the Belgian’s standings margin too significantly.

With eight minutes plus one lap to go, di Grassi had done enough to keep in touch with and make it by Dennis’ Andretti when the Brit made his final run through the ATTACK MODE activation loop. That would mean the home favourite would have to pass the wily Brazilian on-track. No easy task. He’d have to get there first though, as the Venturi man put the hammer down to drive to a 1.5-second lead with FANBOOST employed perfectly.

Into TAG Heuer Added time, and Evans’ title hopes took a huge dent – the Kiwi lost himself down the escape road at Customs House with a technical problem and into retirement. What a boon to Vandoorne’s championship challenge but could that be that for Evans with the Belgian into a 36-point lead.

Di Grassi’s late-race pace saw him take the chequered flag with Dennis unable to live with him as the time ticked away. De Vries came home third, ahead of Vandoorne, da Costa and Buemi. Frijns, Bird, Sette Camara and Wehrlein rounded out the top 10.