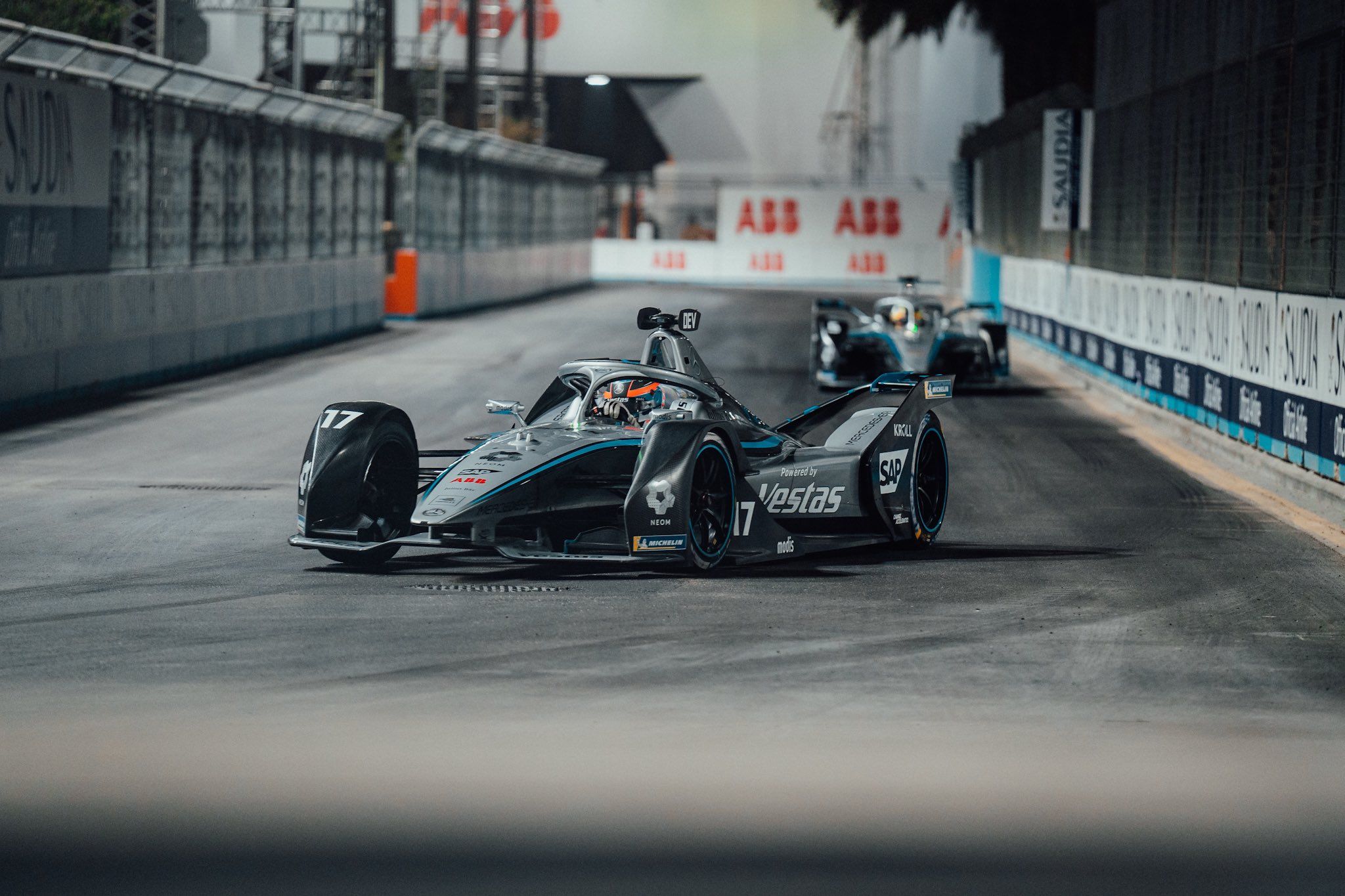 Mercedes ended up 1-2 in Race 1 of Diriyah EPrix to start 2021/22 Formula E season with Nyck de Vries ahead of Stoffel Vandoorne and Andretti’s Jake Dennis.

Stoffel Vandoorne started the 2021/22 Formula E season well on pole in his Mercedes in Saudi Arabia’s Diriryah EPrix Race 1 of the weekend as he led the way from teammate Nyck de Vries, who passed front-row starter Andretti’s Jake Dennis.

Venturi’s Edoardo Mortara rounded the Top 10 as DS Techeetah’s Antonio Felix da Costa retiring due to damage to his suspension on Lap 1. The drivers soon started to take Attack Mode as the race was nuetralised due to an off for Mahindra’s Oliver Rowland.

Rowland and Frijns where touching wheels as the Brit had nowhere to go but into the barrier, bringing out the safety car. Vandoorne led the way from de Vries and Dennis, with Lotterer in fourth from de Grassi, Bird, Cassidy, Guenther, Mortara and Pascal Wehrlein.

Under the safety car, replays showed Da Costa being squeezed in Turn 1 by three other cars which damaged his suspension. The other reply saw Rowland hitting Frijns at Turn 14 as they went side-by-side with the Dutchman then hitting the rear of the Brit to a spin.

The race, meanwhile, got away from Vandoorne after the Belgian didn’t activate his Attack Mode correctly. It put de Vries in the lead of the Formula E race eventually as Lotterer got Dennis, who came back on him but was squeezed in the lead-up to Turn 1.

In the process, Lotterer hit Dennis too. Bird, meanwhile, got back to fifth from di Grassi as Cassidy steadied in seventh with Wehrlein gaining to be eighth from Mortara and Jaguar’s Mitch Evans who moved himself into the Top 10 after passing Guenther.

As the Mercedes duo led the way, Dennis continued to hound Lotterer for third. The Brit barged his way through at Turn 1, but they still touched with the Andretti driver radioing about a potential puncture. Fortunately, he was safe in third.

Once Lotterer lost third, the German dropped to 10th in no time as Bird, di Grassi, Cassidy, Mortara, Vergne and Evans getting through him. Frijns, meanwhile, was handed a drive-through penalty for causing a collision during his incident with Rowland.

At the front, the Mercedes duo eased in to finish 1-2 to open the new Formula E season as de Vries won Race 1 of Diriyah EPrix from Vandoorne and Dennis third. There was power scare for many as Bird was fourth from di Grassi in the Top 5.

Mortara got Cassidy on the line to be sixth, with Vergne eighth, Askew ninth and Evans rounding out the points position in the Top 10. It dropped Wehrlein out of the points in 11th with Guenther 12th from Lotterer, who could only manage 13th in the end.