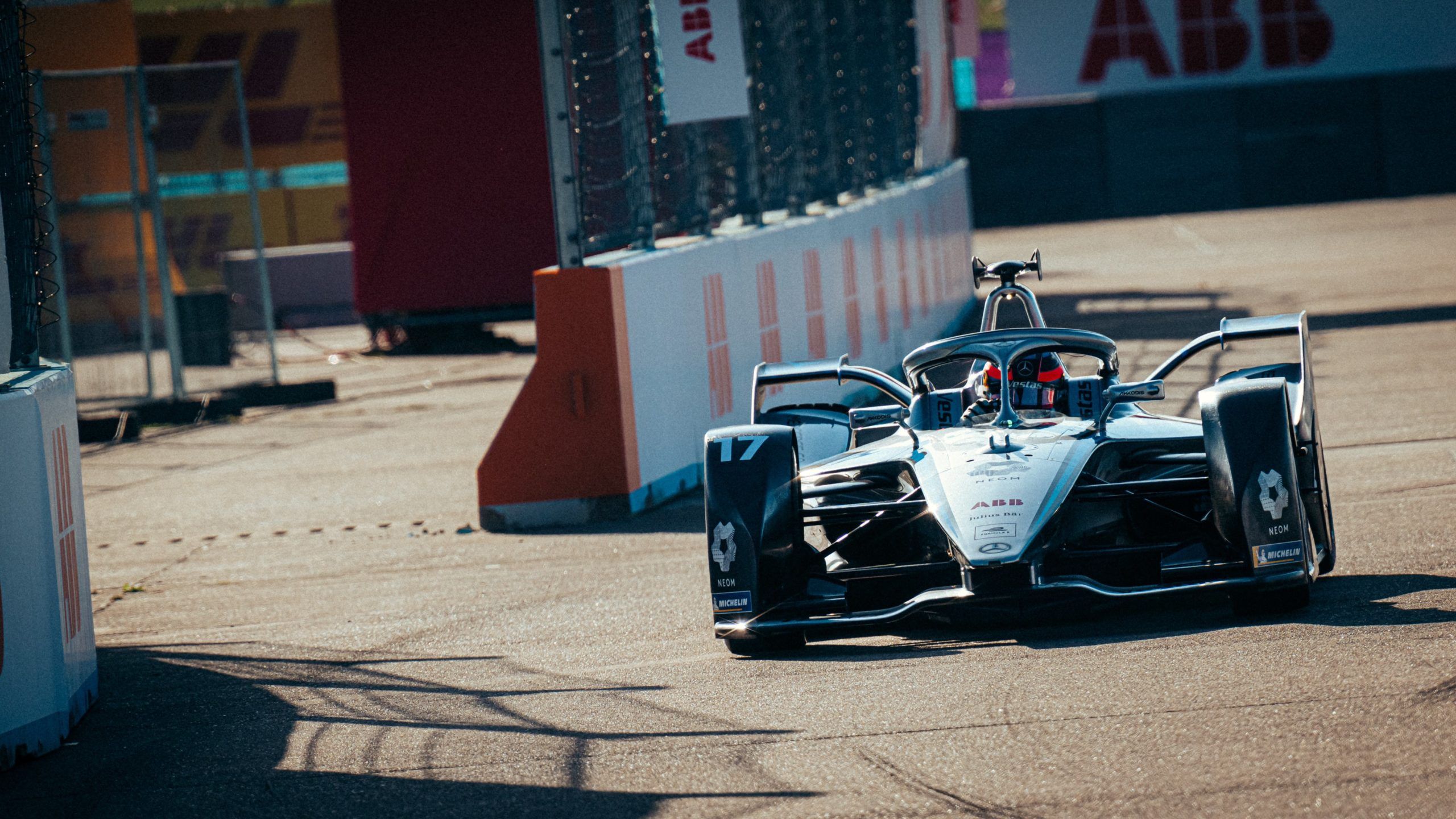 Nyck De Vries took his second win of the Formula E season by defeating his Mercedes-EQ team’s customers Venturi in the second race of the double header in Berlin.

De Vries forced his way through in an aggressive start for the Mercedes-EQ driver, passing Frijns and Mortara at the first corner in a hugely committed and elbows-out move on the inside.

Mortara’s teammate Lucas Di Grassi passed the Techeetah of Antonio Felix Da Costa on the first lap with the Nio 333 of Oliver Turvey notably making an optimistic lunge into Turn 5 on several cars, with the rest of the field surviving the squabble of the first lap around the reversed Berlin layout.

After only a couple of laps, Mortara was back on the rear of De Vries, utilising the slipstream to conserve more energy than the Mercedes-EQ. De Vries would be an early activator of his attack mode, dropping back to P3 behind Mortara and Frijns with the latter diving out wide to follow suit soon after, but crucially failing to activate the power boost.

The field spread out after only a few laps, and the Techeetah of Jean-Eric Vergne dropped back down the order after losing a couple of places down into P10, at the same time as the pack at the front diced for positions during the first attack mode phase, owing to the differences in when each driver chose to take to the activation zone.

Most noteworthy in this fight was Stoffel Vandoorne, making up places with his attack mode, but quickly losing out to a charging Di Grassi and Frijns when the shoe was on the other foot. He soon got a move on however, rounding off a Mercedes powertrain 1-2-3-4 with thirteen minutes to go, by passing Da Costa.

Meanwhile, the Dragon Penske of Antonio Giovinazzi managed to avoid the indignity of being lapped in Formula E, when he activated his late-race attack mode and momentarily became the quickest car on track. He was however in P22, and last with no retirements recorded in the race.

Energy conservation was the name of the game in the closing stages, with the frontrunners remaining status quo for a period whilst sporting remarkably similar energy figures that wouldn’t allow huge advances to be made by many, except Vandoorne and Oliver Rowland.

The Belgian told late-on that he had “half a percent more” energy than the Venturi of Di Grassi ahead which enabled him to make an opportunistic dive into P3 soon after Rowland overtook Da Costa around the outside. However the Mahindra was soon re-passed by the Techeetah, and by Frijns.

Frijns quickly beared down on Da Costa, and used his slight energy advantage to pull up behind and unexpectedly swipe across the back of the Portuguese driver’s Techeetah, pitching him sideways into the wall on the back straight. Frijns made his way past though and crossed the line P5 with Da Costa pulling off an extraordinary save and continuing to P6.

However it was De Vries who took the chequered flag in P1, with Mortara in P2 and Vandoorne close behind in P3 – extending the Belgian’s lead at the top of the championship standings.