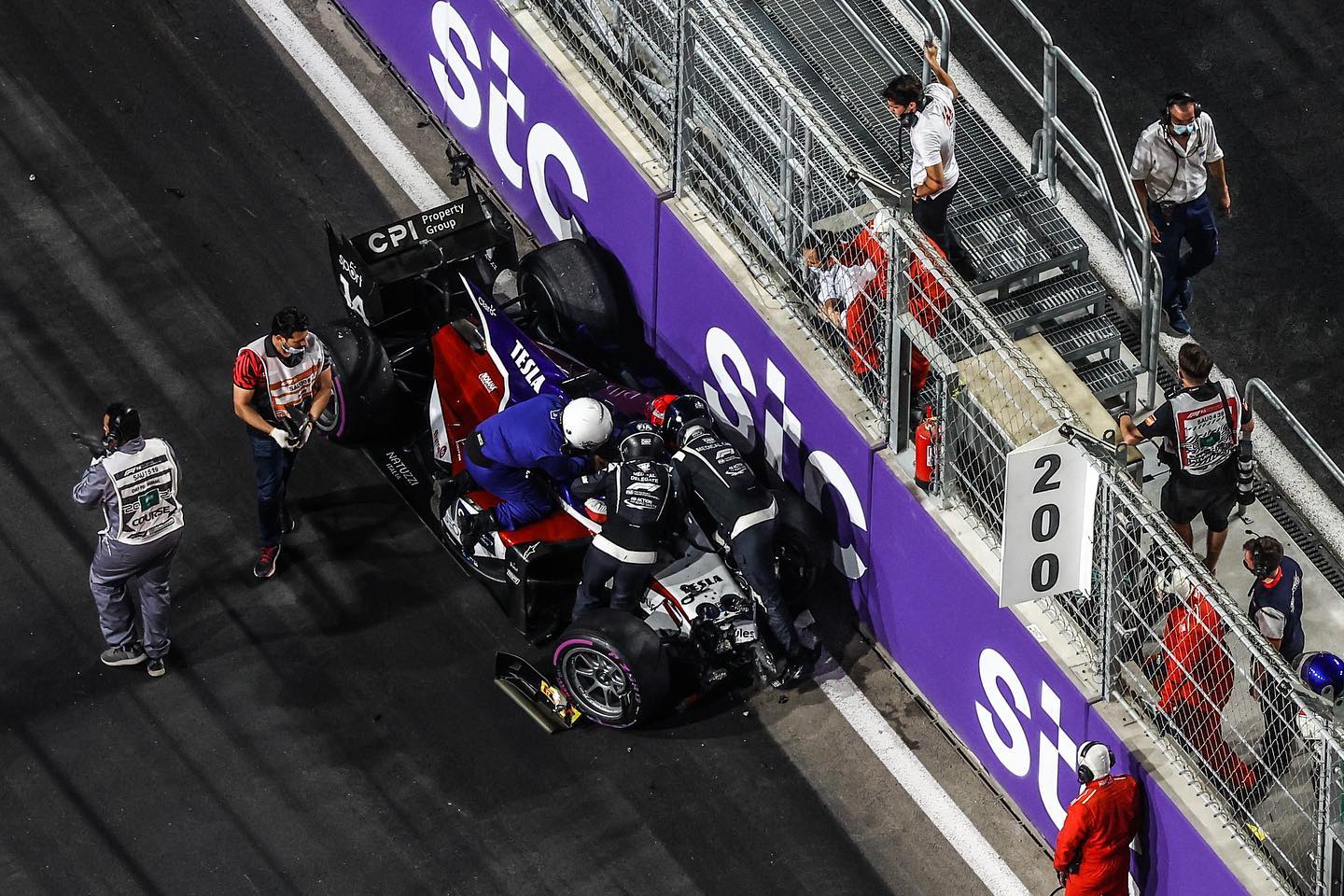 Enzo Fittipaldi has suffered a fracture following the startline crash in feature FIA F2 race in Jeddah as Theo Pourchaire escapes any injury.

Following a mammoth delay into the start of feature FIA F2 race in Jeddah due to barrier repair after a Porsche race, the final race was further hampered by a startline crash between ART Grand Prix’s Pourchaire and Charouz Racing System’s Fittipaldi.

Pourchaire stalled on the line and Fittipaldi smashed into him after he was unsighted by the cars ahead. The F2 race was red-flagged and eventually resumed after both the drivers were taken away to the hospital and the cars cleared from the track.

The world feed showed no replays of the incident, neither the extraction process. It was understood that both Pourchaire and Fittipaldi were conscious while being taken to the hospital as the FIA released a statement by the end of the F2 event.

Following the events of F1, Pourchaire first took to social media to thank everyone for the messages and note that he is fine in the hospital but asked everyone to pray for Fittipaldi, who was injured in the incident – although he did not mention the extent of it then.

“Hey everyone, Just wanted to tell you that I’m globally fine ! For the moment I don’t know if it’s already the end of the season for me. But the most important is not that, that was a really big one and Enzo is injured. I wish him the best recovery possible. You guys can send him kind messages. He needs that,” stated Pourchaire.

After few hours Pietro Fittipaldi – brother of Enzo – shared an update confirming of a heel fracture. “Hey everyone thank you for all the messages. Enzo is awake and alert and resting at the hospital. He has a fracture in his right heel but thankfully things are much better than what we all expected. Thank you to the FIA, the team and all the medical staff here in Saudi Arabia. Will update more tomorrow,” he stated.

With the 2021 F2 finale this weekend in Abu Dhabi, for Fittipaldi it looks unlikely that he could be cleared to compete even if the injury is not heavy. As for Pourchaire, it will depend on the shock his body has absorbed but any decision will have to be taken soon.

UPDATE: Fittipaldi shared about bruises to his face following the incident with a picture and message from the hospital added with it.

UPDATE: The FIA shared a formal update on December 7 on Pourchaire being released from the hospital and Fittipaldi fracturing his heel and bruising his eyes.

“Following transfer to King Fahad Armed Forces Hospital, Jeddah, medical investigations revealed no ongoing issues for Pourchaire, who was discharged from their care that same evening. Fittipaldi was found to have a fracture on his right heel and a lesion on his left eyebrow. He spent the night in the ICU for observation and is making good progress,” stated the statement.

Here’s how the feature F2 race panned out