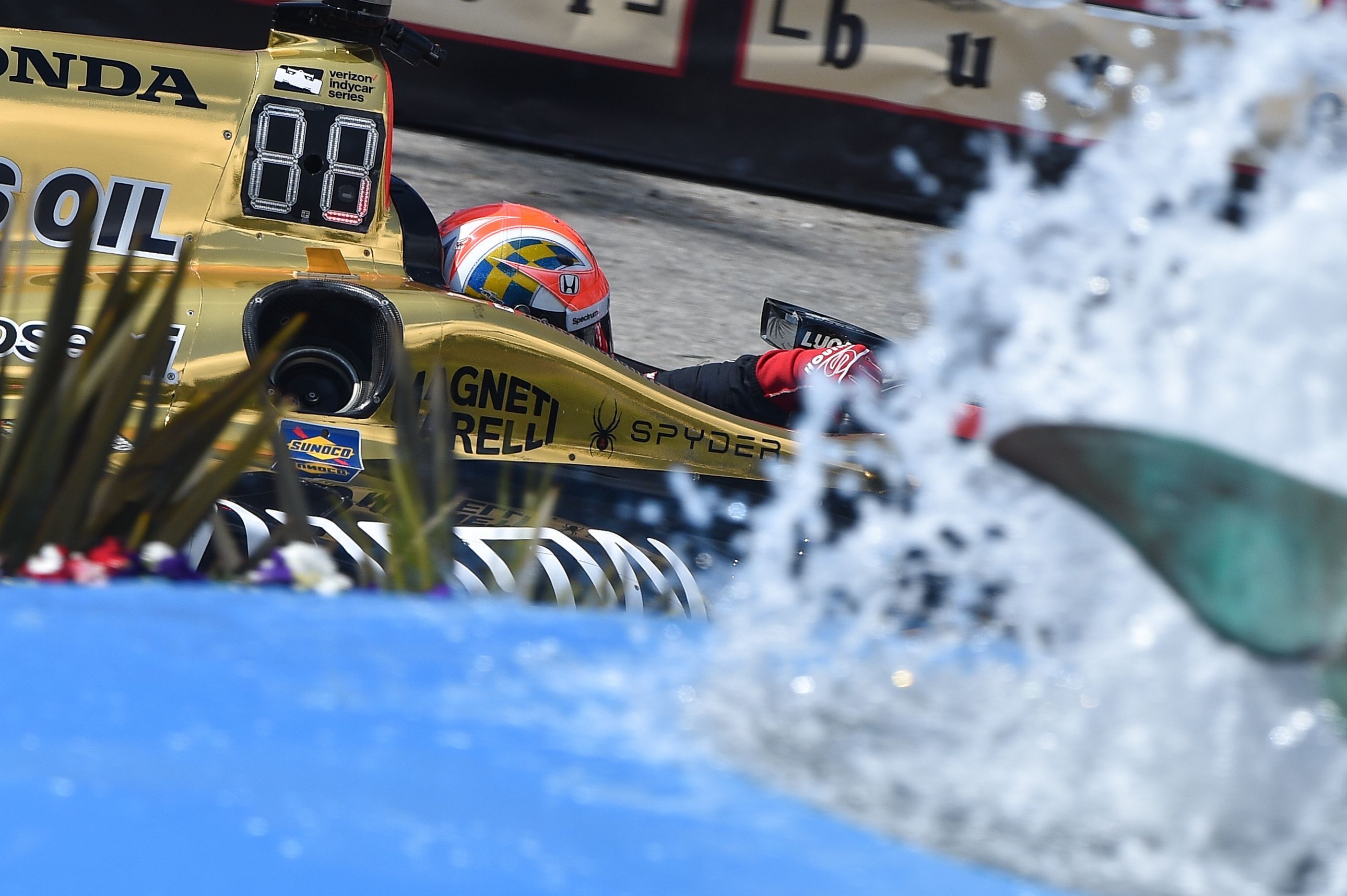 James Hinchcliffe has won the Toyota Grand Prix of Long Beach. The victory was the first for Hinchcliffe and Schmidt Peterson Motorsports since April 2015.

The first caution period came already on the first lap. Charlie Kimball and Will Power had gone side-by-side through the fountain section. The pair made contact at Turn 4. Damage to the rear of the car ended Kimball’s race while Power had to stop for a new front wing. The race restarted on Lap 6, and on the following lap Hunter-Reay passed Hinchcliffe for the second place.

The race distance at Long Beach allowed finishing the race with two stops with some fuel saving and the help of cautions. However, many drivers chose to do three stops. Tony Kanaan and Will Power who had already pitted during the caution because of damage pitted already after 11 laps out of 85, hoping the strategy to help them through the field. Hélio Castroneves who lost five positions at the start pitted after Lap 12. The defending Long Beach winner and series champion Simon Pagenaud had started the race from the rear of the field following a qualifying interference penalty; hoping to make progress he pitted after Lap 14.

As Marco Andretti‘s car was going slow around the track, Scott Dixon pitted from the lead, ensuring he has already pitted in case of a potential caution period. However, the caution didn’t come out and Dixon was running on a different strategy to Hunter-Reay, Hinchcliffe, Rahal, and Rossi. Dixon was also behind Sébastien Bourdais and Spencer Pigot who had pitted under the early caution period.

After everbody had made their first stops, Dixon was back in the lead, followed by Hunter-Reay, Hinchcliffe, Pagenaud, Newgarden, Castroneves, and Rossi.

Newgarden made his final stop after Lap 61 after having cut the gap to Dixon. Dixon came to his final stop two laps later, yet Newgarden was able to pass Dixon during his stop but they both were behind the top three of Hinchcliffe, Hunter-Reay, and Bourdais. On the same lap, Alexander Rossi’s Honda-powered Andretti-Herta machine had stopped on the frontstrech, bringing out the caution.

The race restarted on Lap 70. Hinchcliffe with red tires was able to pull away from Hunter-Reay with black tires. Bourdais in third place was behind lapped cars and couldn’t race against the top two, though had to defend against Newgarden.

The race restarted with three to go. Bourdais couldn’t challenge Hinchcliffe who achieved his first victory at Long Beach. The victory was his and Schmidt Peterson Motorsports’ first race since the Grand Prix of Louisina at New Orleans in April 2015. Hinchcliffe’s teammate Mikhail Aleshin tried to block JR Hildebrand’s overtaking attempt on the final lap, leading to a collision. The drivers finished a lap down in 11th and 12th places, with stewards promoting Hildebrand past Aleshin who was at fault in the incident.

With the second place, Dale Coyne Racing’s Bourdais continues in the lead of the Verizon IndyCar Series points. Behind the two Honda-powered cars, Josef Newgarden was the top Chvrolet driver with a third place for Team Penske.