Lewis Hamilton confidently brought the race to win – the third of the season and 25th of his career. Nico Rosberg finished second – Mercedes drivers won the first four Grand Prix, winning three double – the team returned to Europe obvious favourite of the season. Fernando Alonso stood on the third of the podium, becoming the best of the rest.

1st, Lewis Hamilton (Mercedes): “At this race we had an awesome car. Maybe by all looked easy, but I would never be able to achieve this result without the hard work of the team. Honestly, I still cannot believe how awesome the car was me this time. And today’s result – the result of their efforts. We made the car quite a lot of changes after the second Friday practice, and yesterday the track was wet – but today it worked perfectly. Monitor the condition of the tires was quite simple. In fact, I was competing only with myself. At the first pit stop we lost some time, but I’m still very happy today’s result team. I was a little way out from the track – the left front tyre beginning to granulate, and that segment was longer than I expected. As a result, the temperature began to fall, and tires finally fallen into disrepair. But eventually we managed”

2nd, Nico Rosberg (Mercedes): “I’m still in the lead in the overall standings, but I still would not want to use the word “still”. I hope to stay at this place. The whole weekend in China has developed very badly for me. In qualifying, I made a mistake on my fastest lap and the race failed system data from the car to the pit lane, which is why the team could not provide me with all the information. For this reason I have a bad start. But I hope that in Barcelona everything goes more smoothly for me. The fight was very dense, and as a result there was contact between me and Bottas, but the car turned out all right – and then I was able to break through. It is a pleasure to drive; the team built a great car, so I have to give credit to every employee in Mercedes.” 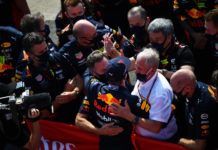