Like last year with Williams, F1 Racing’s exclusive pictures of the new Renault have been leaked on the internet. The livery is similar to the last Renault F1 car in 2010 with a predominance of traditional yellow.

F1 Racing traditionally publishes exclusive pictures of new F1 cars for a couple years now. But this exclusivity attracts leakers and therefore, after Caterham some years ago and Williams last year, it is Renault’s turn to have its car revealed to the world.

On the leaked pictures, we can see a similar livery to the one used in 2010 by the French brand with Robert Kubica and Vitaly Petrov as drivers. The car has yellow for dominant color with black stripes and the chassis looks like the one used in 2015.

We can also note the presence of some sponsors on the car, like PVDSA. The car is actually Pastor Maldonado’s one as proved by the 13 on its nose, which shut downs rumors about the Venezuelan leaving the team.

On one of the leaked pages, we can see a quote of Alan Permane who predicts a difficult year for the team: “It is no secret that the 2016 car is a car designed initially for a Mercedes engine that will now have a Renault in it.”

According to some reliable medias such as Auto Sport und Motor, the brand will reveal its car on February 3rd and give details about its F1 comeback, its drivers and the organization in the team.

Here is the new Renault according to F1 Racing: 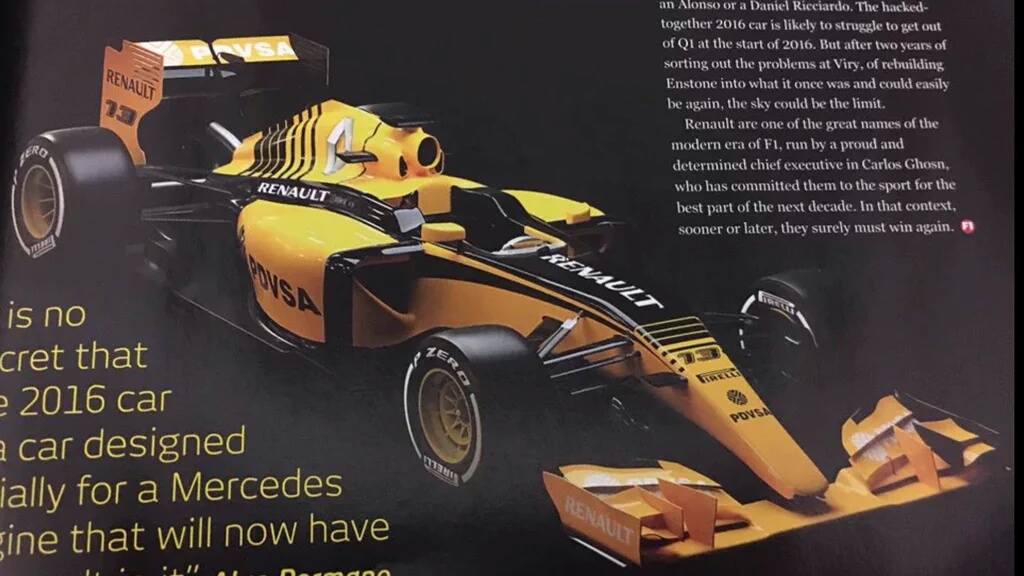