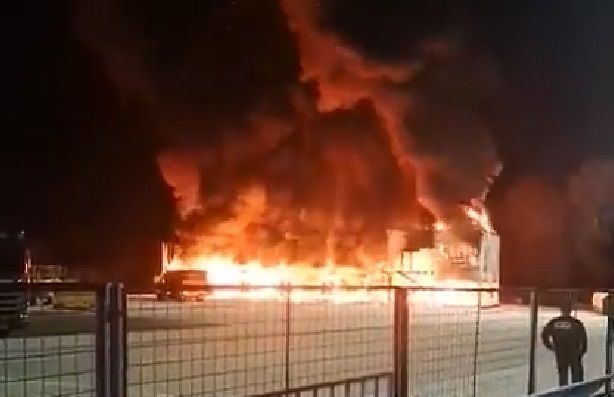 All the 12 MotoE teams gathered with their respective riders for the three-day pre-season test at Jerez which started off on Wednesday. After the first day of running, the combined results saw Avintia’s Eric Granado on top with 1m48.984s lap.

The Brazilian was the only one to dip in the 1m48s bracket with Ajo Motorsport’s Niki Tuuli and Tech 3 E-Racing’s Hector Garzo rounding the Top 3 among the 18 riders who tested. With the set-up of the teams not very huge, all of them stayed tightly together.

A temporary garage unit has been set-up at Jerez, where all the teams work together with the 18 Energica Ego bikes which also houses the team equipment, riders’ racing gears, laptops for engineers and many more related items.

It is being said that the fire broke in the garage unit at 12:15 AM and destroyed almost all the items which may include the bikes. It comes as a major hit as it puts a huge question mark over the series which is to kick-start on May 5 with MotoGP’s Spanish GP at Jerez.

The cause for the fire remains unknown but the reports have suggested that no one was injured in the incident with only material lost to be at a catastrophic level. It remains to be seen what the championship organisers decided for the series going ahead.

For now, the remaining two days of the test stands canceled as they investigate the cause of the fire, which may have brought an early end to the championship – at least for the 2019 season by the looks of it.

An early statement from MotoGP reads:

“At around 00:15 early on the 14th of March during the second preseason MotoE test at the Circuito de Jerez – Angel Nieto, the E-Paddock for the FIM Enel MotoE World Cup caught fire, causing major damages and losses.

“The cause of the fire is currently under investigation. Fortunately there have been no injuries. An update will follow in the coming hours regarding the exact causes of the fire and any subsequent changes to the calendar.”

It states that the rebuilding work is already underway along with the replacement of materials and the motorcycles that was lost in the fire. The cause of the fire has not been revealed yet with a proper investigation on-going still.

However, the statement confirms that no motorcycles were charging in the box where the fire started but interestingly it concedes that risk is part of the evolution and experiment the series is undertaking with certain technologies.

“Early on the 14th March, a fire in the newly-built E-paddock at the Circuito de Jerez – Angel Nieto destroyed the majority of material for the FIM Enel MotoE™ World Cup. No one suffered any injury as a result and the damage was purely material. This is the key concern for all those involved as safety is the top priority on and off track.

“As previously stated, an investigation is underway to determine the exact cause of the fire, the results of which will be published as soon as it has concluded. The FIM Enel MotoE World Cup is a competition born from innovation, powered by 100% renewable energy.

“This ambition to evolve and experiment with new technologies brings with it an associated risk. It can be confirmed, however, that no motorcycles were charging at the time of the incident in the box in which the fire started.

“Dorna Sports and all of our partners in this new venture are committed to getting the FIM Enel MotoE World Cup back on track as soon as possible, with work already underway to begin rebuilding and replacing materials and motorcycles lost in the fire.

“MotoE will race in 2019 and a revised calendar will be announced in due course. However, it can be confirmed that the FIM Enel MotoE World Cup will not race at the Circuito de Jerez – Angel Nieto as part of the Gran Premio Red Bull de Espana this season.”