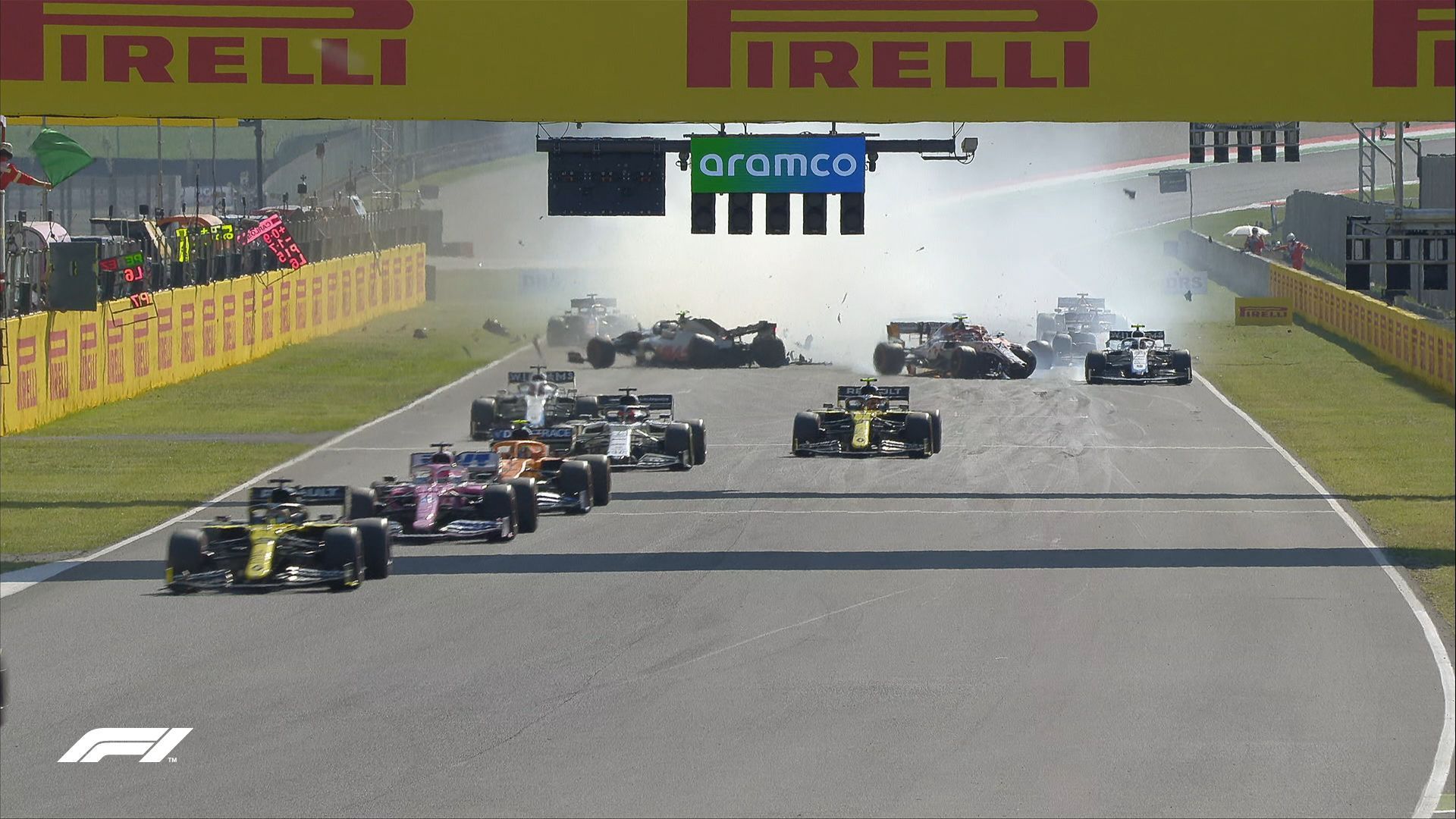 The FIA has warned 12 drivers for the re-start incident in F1 Tuscan GP while cleared Valtteri Bottas of it as the Lap 1 clash bears no further action.

Having reviewed videos and also hearing from the drivers, the FIA let-off 12 F1 drivers with a warning for the heavy re-start incident at Mugello during the Tuscan GP, which happened just after another big accident post the initial grand prix start.

Red Bull Racing’s Max Verstappen was a passenger in that when Alfa Romeo Racing’s Kimi Raikkonen hit the back of his car after his side-by-side contact with AlphaTauri’s Pierre Gasly, who was sandwiched in between the Finn and Haas’ Romain Grosjean.

Both Verstappen and Gasly retired, while Raikkonen ended up ninth with Grosjean in 12th – with heavy damage. The FIA noted about the heavy impact but labelled it as a Lap 1 incident, with further action warranted on any of the drivers’ involved.

It was the same for Racing Point’s Lance Stroll when he spun around McLaren’s Carlos Sainz in a separate incident. Meanwhile, for the larger crash involving more cars upon safety car re-start, the FIA warned as many as 12 drivers as mentioned above.

Among those, Magnussen, Latifi, Giovinazzi and Sainz were the ones directly involved in the mega crash which let to the retirement of all from the Tuscan GP and a red flag stoppage. Several replays showed Williams’ Russell having a huge gap from the Top 10.

However, the FIA findings did not mention Russell. They found that the root cause of the incident was inconsistent application of throttle and brakes. They felt that these inconsistencies from the above had an extreme concertina effect on others behind.

The FIA also stated that some drivers could have avoided the incident by staying in one line which they didn’t and which led to some getting un-sighted. Effectively, no driver could be blamed wholly for the clash and so they were left off with a warning.

Adding more, the FIA ruled out Bottas to be blamed for slowing the field down. They said that the Finn followed all the rules stated in the regulations as he – as a race leader – was entitled to re-start and dictate the pace.

“The Stewards heard from the drivers of Car 10 (Kevin Magnussen), Car 6 (Nicholas
Latifi), Car 26 (Daniil Kvyat), team representatives, reviewed video evidence including
car onboard cameras, and examined the telemetry of each car involved in the restart. The Stewards conclude that the root cause of this incident was the inconsistent
application of throttle and brake, from the final corner along the pit straight, by the
above drivers.

“The Stewards acknowledge the challenges the location of the Control
Line presents at this circuit and the desire of drivers to take advantage of the restart.
However this incident demonstrates the need for caution to be exercised in the restart
situation and note that there was an extreme concertina effect which dramatically
increased as it moved down the field.

“We also note that some drivers might have avoided being involved in the incident had
they not followed directly behind the car in front. By doing so they effectively blocked
off all visibility of what was happening immediately in front of the preceding car.
A warning has been imposed as it is the view of the Stewards that no one driver was
wholly or predominantly to blame.

“It was further noted that the driver of Car 77 (Valteri Bottas) and the other drivers
involved in the restart not mentioned above, complied with the regulations. Car 77 had
the right under the regulations to dictate the pace.”

Here’s the statement from Lap 1 incident:

“The Stewards viewed video evidence from multiple angles. Three cars (7, 10 and 8) were side by side – cars 10 and 8 came close together as 8 moved to the left, and 10 moved to the left to avoid car 8, colliding with car 7 as it moved slightly to the right. Car 33 was a “victim” of these three cars coming together.  We regard this as a first lap incident albeit with major consequences.”