The FIA has released details of Bahrain GP track limits along with DRS zones, as weight increase has been approved for F1 2022.

Ahead of the start of the 2022 F1 season, the FIA noted Neils Wittich to be the Race Director for Bahrain GP with Eduardo Beritas busy with the WEC’s race in Sebring. He sent out the first Director’s Event Notes and the big talking point was track limits.

After the whole 2021 drama with regards to Turn 4 moment between Max Verstappen and Lewis Hamilton, the FIA Race Director simply noted, ‘in accordance with the provisions of Article 33.3, the white lines define the track edges’, with nothing else mentioned.

The Article 33.3 of Sporting Regulation then states: “Drivers must make every reasonable effort to use the track at all times and may not leave the track without a justifiable reason. Drivers will be judged to have left the track if no part of the car remains in contact with it and, for the avoidance of doubt, any white lines defining the track edges are considered to be part of the track but the kerbs are not.

“Should a car leave the track the driver may re-join, however, this may only be done when it is safe to do so and without gaining any lasting advantage. At the absolute discretion of the Race Director a driver may be given the opportunity to give back the whole of an advantage he gained by leaving the track.”

Much like 2021 though, the FIA Race Director could alter the track limits once the car have had time on track in FP1. On the information, Wittich noted that circuit has seen no major changes from the 2021 event, with the DRS zones also staying the same.

Already it became apparent that van der Merwe will be replaced after neither Mercedes and or Aston Martin mentioned the name of medical driver when they released details of the new safety and medical cars. His no vaccine stance made it difficult for the FIA to retain.

While the FIA hasn’t made it official thus far but Correia is in Bahrain already as per his social channel and RacingNews365 confirmed it from the governing body’s spokesperson. He joins Bernd Maylander who continues to drive the safety car.

Here’s details from the FIA of the new laser scrutineering system: 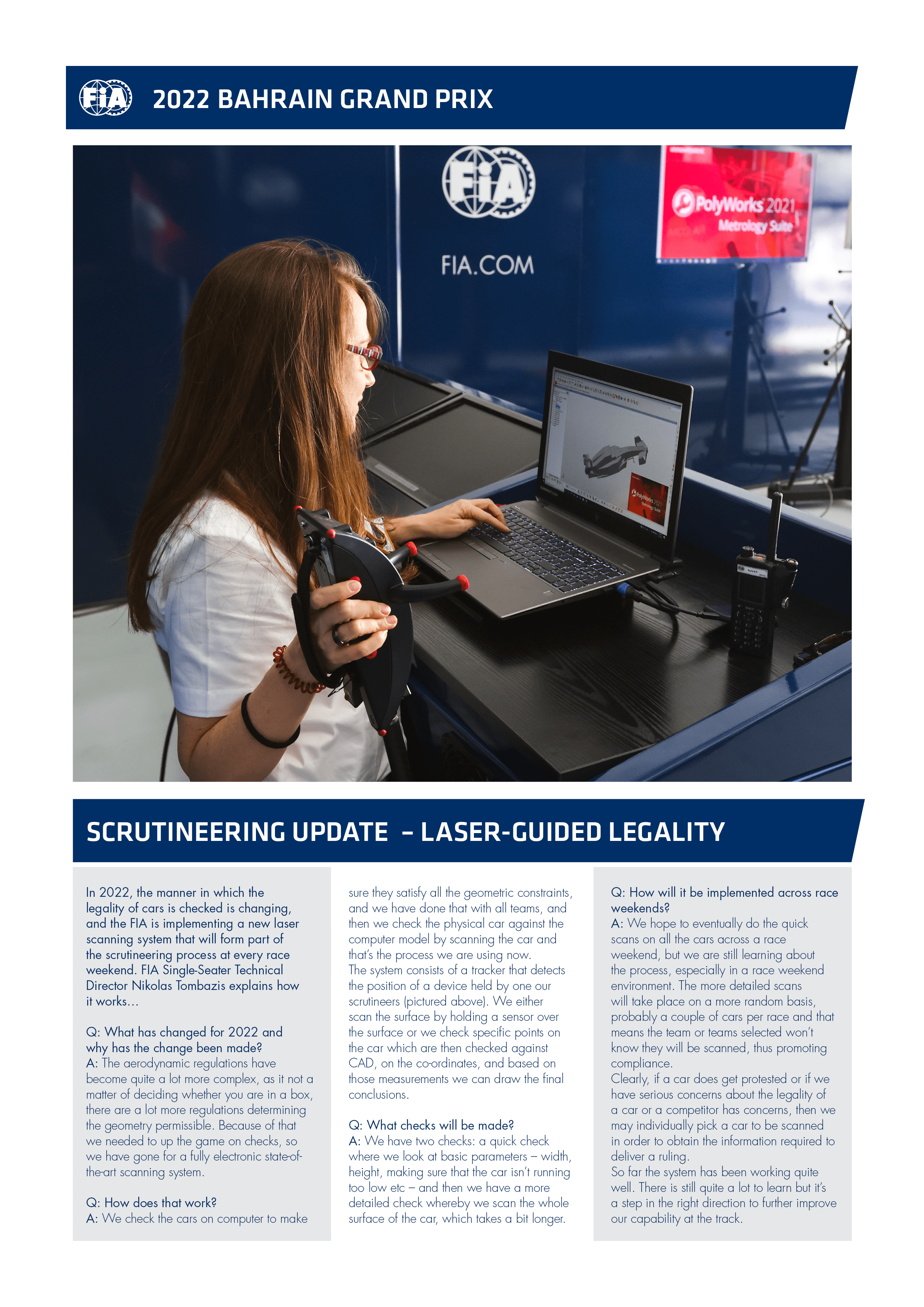 The FIA also released details of the new Automobile Display:

Between 13:30 and 14:30 on Friday, one car from each team must be positioned between the team’s pit stop area and the edge of the fast lane. Please note that the fast lane will be used for a Paddock Club pit lane walk and therefore the teams must have their own tensor barriers in place to separate this from the Pre-Event Automobile Display. The other car may be used for pit stop practice.

Moving away, while the full details of the FIA World Motor Sport Council Meet is likely to be released on Friday, the Technical Regulations was updated on Thursday with the approval of weight increase as the F1 teams will hoping for after the pre-season tests.

Apart from Alfa Romeo, almost all of the other teams were overweight and beyond the 795 kg mark. There were murmurs of some being beyond 800 kg, but the FIA in a compromise have settled on the weight to be increased by 3 kg, with the new weight being 798 kg. But they will have to lower the weight in 2023 to 796 kg.

Here’s the latest update to FIA Sporting Regs for 2022