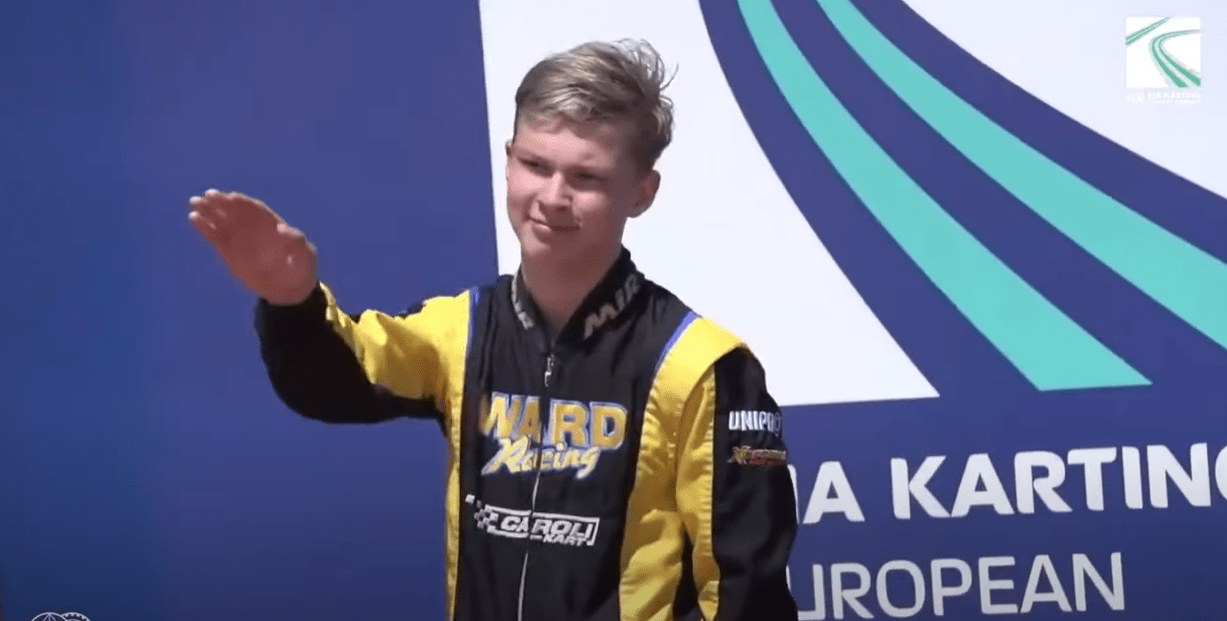 The FIA has launched an investigation into an unacceptable gesture from karter Artem Severyukhin during podium ceremony in Portugal.

The incident took place during the FIA Kart World Championship event in Portugal where Severyukhin won the race in the OK category while competing for Ward Racing. The Russian driver is racing under the Italian flag after the recent change in rules.

It is not clear if Severyukhin did the Nazi salute or something else, as he thumped his chest twice before raising his right hand on the podium and burst into laughter. There was immediate resentment from members there as a complaint was lodged too.

The FIA has started the investigation into the matter. “The Federation Internationale de l’Automobile confirms that it has launched an immediate investigation into the inacceptable conduct of Mr Artem Severyukhin that occurred during the podium ceremony for the OK category at Round 1 of the 2022 FIA Karting European Championship at the Kartodromo International do Algarve in Portugal. The FIA will communicate shortly on the further steps that will be taken in this case,” it stated.

Furthermore, Ward Racing has terminated its contract with Severyukhin and apologised for the individual’s behaviour. The races are livestreamed on FIA Karting Youtube page, but they have since removed the Sunday’s stream from its platform.

“This statement is made in response to the personal actions of Ward Racing pilot Artem Severyukin during the award ceremony in Portimao on April 10, 2022. Ward Racing is deeply in shame of the pilot’s behavior which it condemns in the strongest possible terms. Action will promptly be taken accordingly.

“Ward Racing is a privately owned Swedish team that unites pilotes from different countries, acting under licenses of various countries. The pilots of the team are not united by country or other categories. Most of the pilots do not represent the national team of any country, rather act individually. The actions of Artem Severyukhin during the award ceremony on April 10, 2022 were exclusively individual and do not represent the views and values of Ward Racing in any manner.

“On the contrary, Ward Racing stands with the international community condemning Russia’s invasion of Ukraine and expresses its solidarity with the people suffering because of this unprovoked and horrific attack. Since the start of the ongoing war, our firm stance has been demonstrated with “No War” helmets and stickers. In addition, we currently have three Ukrainian families traveling with us because they have no home to return to. As Swedish citizens, we are furthermore proud of our country which made the historical decision to send weapons to Ukraine for the fight against the Russian army.

“Ward Racing accordingly condemns the personal actions of pilot Artem Severyukhin during the award ceremony on April 10, 2022 in the strongest possible terms, as it considers them a manifestation of unsportsmanlike behavior, an unacceptable violation of the ethical and moral sports codex. With this statement, Ward Racing expresses its opinion, as well as the opinion of all athletes and staff of the Ward Racing team. On the basis of these considerations, Ward Racing sees no possibility for continued cooperation with Artem Severyukhin and will proceed with terminating his racing contract.

“Finally, Ward Racing would like to apologize to those who were hurt or distressed by the occurrence. It has long been and will remain a priority for Ward Racing to work for a more diverse, inclusive, and respectful racing climate.”

#Russian driver Artyom Severyukhin, competing under the Italian flag at the #European Junior Karting Championship, showed a #Nazi salute at the awards ceremony.

He competing under the #Italian flag because of the sanctions imposed on #Russia. pic.twitter.com/q4wOGHPsvR