The three-way fight for the ADAC Formula 4 title will go to the wire and be decided in the last race of the season on Sunday. Juri Vips (17, Estonia, Prema Powerteam) is the overall leader in the run-up to the final round but has a lead of only four points on Felipe Drugovich (17, Brazil, Van Amersfoort Racing) and just 7.5 points on team-mate Marcus Armstrong (17, New Zealand). Never before has the championship decider in the ADAC Formula 4 been more closely contested and more open than this year.

“We still need to improve, because we’re still slower than the opposition on the straights,” said Juri Vips, who must now turn his full focus to the final race of the year. “Today went well, though. We did quite well, especially in the races. Things are going to be really close again tomorrow.”

Felipe Drugovich won the first race on Saturday morning ahead of Lirim Zendeli (17, Germany, ADAC Berlin-Brandenburg e.V.) and Fabio Scherer (18, Switzerland, US Racing). That enabled Drugovich to take the interim lead in the overall standings, as his rivals, Vips and Armstrong, crossed the finish line eighth and tenth respectively. Mick Wishofer (17, Austria, Lechner Racing) wrapped up the Best Rookie title. The 17-year-old finished twelfth and was the best junior driver once again.

And yet, the prospects had again looked good for Felipe Drugovich as the race got underway. The Brazilian lined up once more in second place while Vips was only 14th on the grid of this high-speed circuit and Armstrong 24th. Due to technical problems, however, Drugovich aborted his start and then had to start the race from the pit lane. The 17-year-old finally retired his car a little later and came away empty-handed.

At the front of the field, Zendeli and Jonathan Aberdein scrapped relentlessly for the lead. The German fought hard to fend off the South African’s attacks until the very end. Behind them came Sophia Flörsch (16, Germany, ADAC Berlin-Brandenburg e.V.), who started from P12 on the grid but fought her way up through the field to finish in the Top Three again, after taking her maiden podium only last weekend at the Sachsenring.

And so the very last race of the season on Sunday (11:30 CEST) will determine the outcome of the championship. Marcus Armstrong will start from pole position after coming tenth in the first race. Juri Vips will be in P3 on the grid, and Drugovich will be in tenth place.

Felipe Drugovich (winner of the first race and currently P2 in the championship, Van Amersfoort Racing): “This morning everything went well and according to plan. But in the second race, we had technical problems with the transmission. My two main opponents will be starting ahead of me tomorrow, but that’s none of my concern. I’ll just give it everything I’ve got and hope that it’s enough.”

Marcus Armstrong (currently P3 in the championship, Prema Powerteam): “We had a big problem in qualifying, but for all that, we made the best of a very difficult situation. Tomorrow, we are on pole, so everything is still possible. We are not as fast as on other tracks, but we are still fast enough to win races. Whoever wins that race will also win the title. So, I’ll just try to win. I’m not going to change anything but instead treat the race like any other.”

Mick Wishofer (2017 Best Rookie, Lechner Racing): “I’m obviously delighted to have won the rookie championship. The race was pretty tough for me. At the beginning, I managed to keep up with Armstrong, but then I made a few minor errors. Unfortunately, I didn’t make it into the Top Ten today, but on the whole, I can feel satisfied.”

Lirim Zendeli (winner of the second race, ADAC Berlin-Brandenburg e.V.): “I wanted to get off to the perfect start. It was a really tough race, but I really wanted to get a win here. It may be possible to do something tomorrow as well, but I’m going into the last race without pressure. I’ll just have fun and enjoy it.”

Jonathan Aberdein (runner-up in the second race, Motopark): “It was a hard-fought and difficult race. At the beginning, we had good straight-line speed, but Lirim defended really well. Sophia made my life difficult, but we managed to maintain our position, and we’re happy about that.”

Sophia Flörsch (P3 in the second race, ADAC Berlin-Brandenburg e.V.): “September is turning out to be my month. I am very happy – this is a great result, and one that I hadn’t been expecting. Many thanks to the team! I might have got past Aberdein too, but I didn’t want to risk anything. Tomorrow, I’ll be starting right from the back, so I’ll just be aiming to progress as far through the field as I can.” 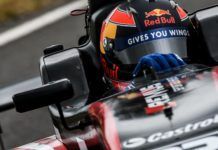 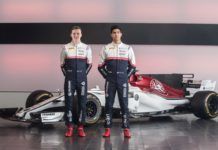 Ilott, Correa, Zendeli among drivers in Sauber Junior Team for 2019 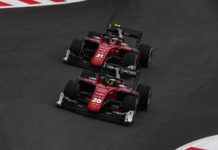