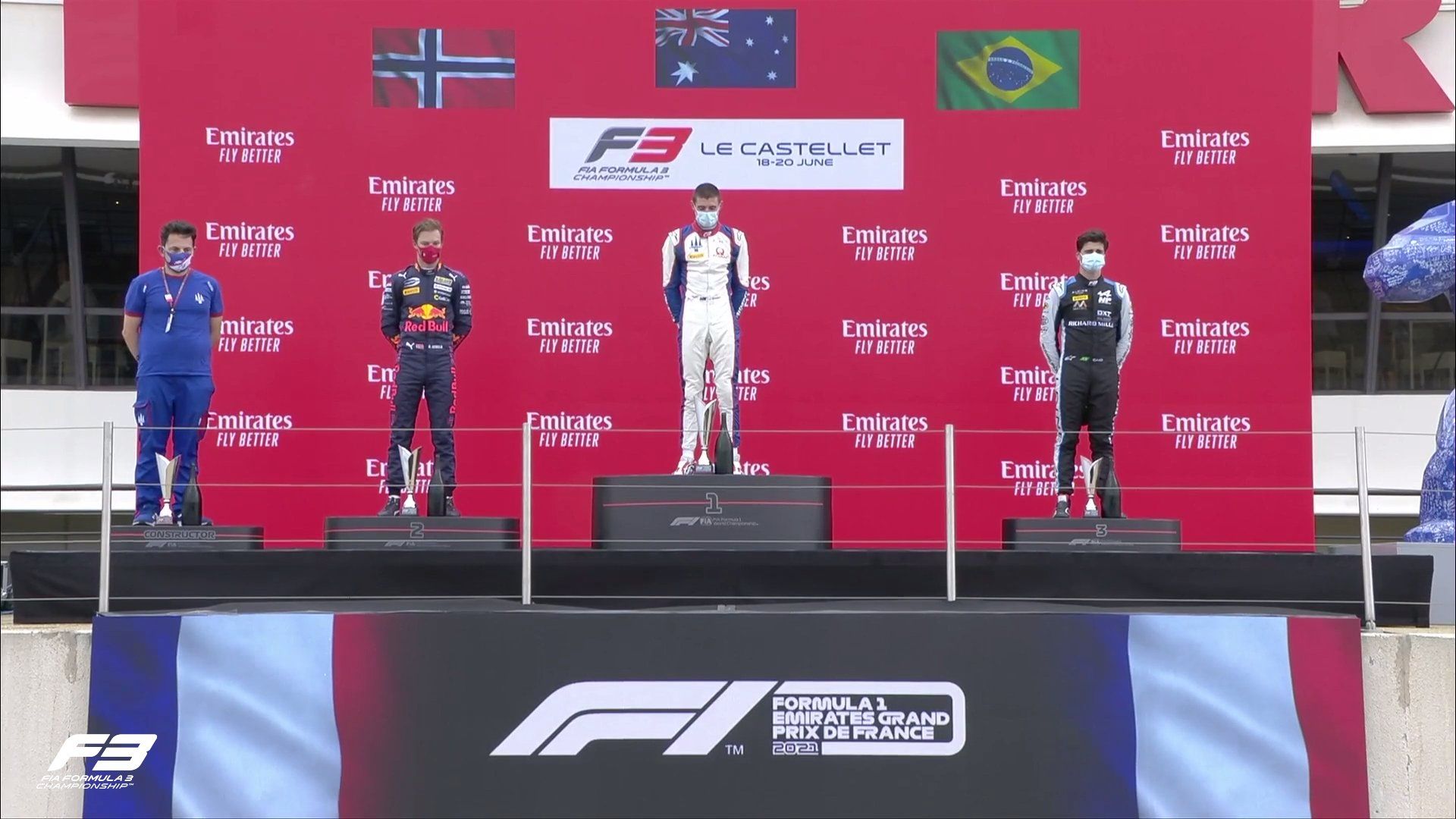 Starting from pole in F3 for the first time in his career, Williams had said that he was aiming for a clear head when the lights went out, and it seemed as if the Australian had achieved it, hauling his Jenzer off the line and into the lead at Turn 1. Attempting to make Williams think was Sargeant, who followed in tow having made light work of David Schumacher off the line for second.

The Trident racer dropping back to sixth, with Iwasa, Juan Manuel Correa and Smolyar also all getting past the stuttering Trident. A brief Virtual Safety Car was required at the end of the first lap as Johnathan Hoggard was forced into a disappointing retirement on his debut, pulling over onto the side of the track and clambering out of his Jenzer.

Clement Novalak matched the top five by getting past Schumacher when racing resumed, while Martins made a move on the third Trident of Jack Doohan for P8. The home hero then picked off Schumacher a lap later. At the front, Williams had been unable to pull away from Sargeant, who remained within DRS range of the Jenzer. There was a wide moment for the Charouz in the final sector, which very nearly allowed Iwasa through from third.

Composing himself, the American used the mistake as motivation to finally get past Williams for the lead. Iwasa had retained momentum from his early attempt on Sargeant and followed the Charouz past Williams to take second at Turn 11. Making it second time lucky, the Hitech Grand Prix driver made a daring move on Sargeant for the lead, diving past the Charouz and into first.

Though, there were question marks over the legitimacy of the overtake, with the Hitech placed under investigation for leaving the track and gaining an advantage. Behind them, Smolyar and Martins were continuing their charge to the podium, both of them picking off Correa for fourth and fifth. It took two attempts, but Smolyar eventually muscled his way through to third, wrestling the final podium place off Williams.

Meanwhile, Novalak had stolen sixth from Correa, as his teammate Schumacher fell out of the top 12. An astonishing final few laps saw the race completely turn on its head, begun by the sudden struggle of Sargeant, who fell to P5. That was followed by a stunning lunge from Smolyar on Iwasa for the lead, who was then smacked with a 5s time penalty for his earlier move on Sargeant. The Hitech dropping to P8 once it was applied.

But Smolyar held the lead for just two frenetic laps, Martins completing overtakes nine and 10 to become Race 1’s fifth different leader. Yet, it was far from over. Smolyar would not be denied and regained the lead on a dramatic final lap. Williams reclaimed a place on the podium due to Iwasa’s penalty, which also promoted Sargeant, Novalak, Correa and Doohan. PREMA duo Hauger and Caldwell were up to ninth and 10th, while Jak Crawford had nabbed 11th, after starting P16.

Completing the most overtakes overall was the third PREMA of Arthur Leclerc. The Monegasque had been forced to retire from Qualifying and started from the back of the grid, but finished the day in 12th after a brilliant drive. 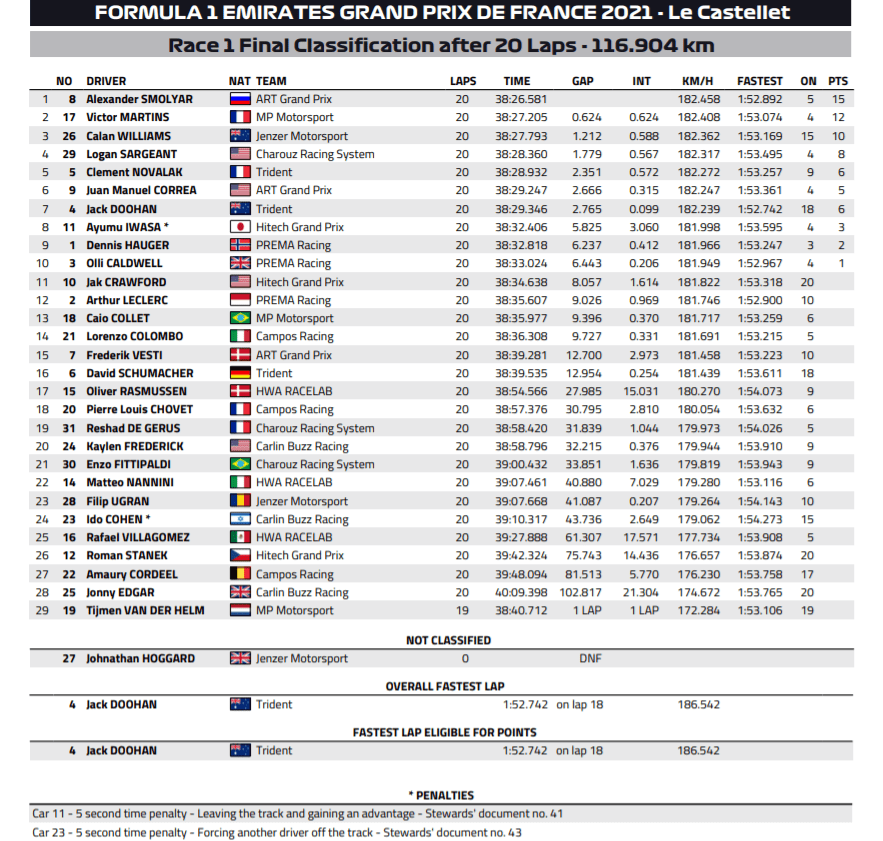 Lining up under dark clouds in France, there was despair for Jak Crawford when the lights went out, the Hitech Grand Prix driver stalling and getting stuck on the starting grid. The American had a front row seat for reverse polesitter Leclerc’s getaway, as the Ferrari junior pulled off without a hitch and held the lead.

Leclerc’s PREMA teammates were battling for second behind him, but Hauger wasn’t able to make a move on Caldwell stick between Turns 1 and 2. Promoted to fourth off the line, Ayumu Iwasa wasn’t able to retain the position for long, dropping down to sixth behind Jack Doohan and Martins, the latter up an incredible six places from P11.

Clément Novalak clambered ahead of the Hitech shortly after for sixth, while Race 1 winner Alex Smolyar was up to eighth from P12. Caio Collet wasn’t enjoying the same success as his MP Motorsport teammate. Finishing outside of the points in Race 1, the Brazilian was forced to retire from the pits in Race 2, after stalling at the start of the race.

But Martins was far from finished, the Frenchman edging ahead of Doohan for fourth, as Hauger began to reel in Caldwell in the fight for second. Lucky for PREMA, Hauger’s eventual overtake was a clean one, with the Italian team retaining hopes of a 1-2-3 finish. There were a couple of scuffles further back, as Kaylen Frederick and Jonny Edgar came together, before Rafael Villagomez and Ido Cohen clashed as well.

The latter was handed a 10s-time penalty for causing the collision, before later retiring. Smolyar and Calan Williams both made it past Iwasa for seventh and eighth in the closing laps, dropping the Hitech racer down to P9 at the flag. In 10th, Vesti was able to hold off David Schumacher and Logan Sargeant for the final points’ position.

Out in front, Leclerc was enjoying a controlled run to the chequered flag, finishing the race with a 4.2s advantage over Hauger, the Norwegian seemingly happy to settle for second behind his teammate. Caldwell’s podium, and PREMA’s 1-2-3, was very much under threat, though.

The Briton had been drawn into a battle with the continually brilliant Martins, who was more than happy to break up the PREMA train. Diving down the inside of Caldwell and into third, the Frenchman made it two podiums in as many races, gaining his 18th position of the weekend so far. 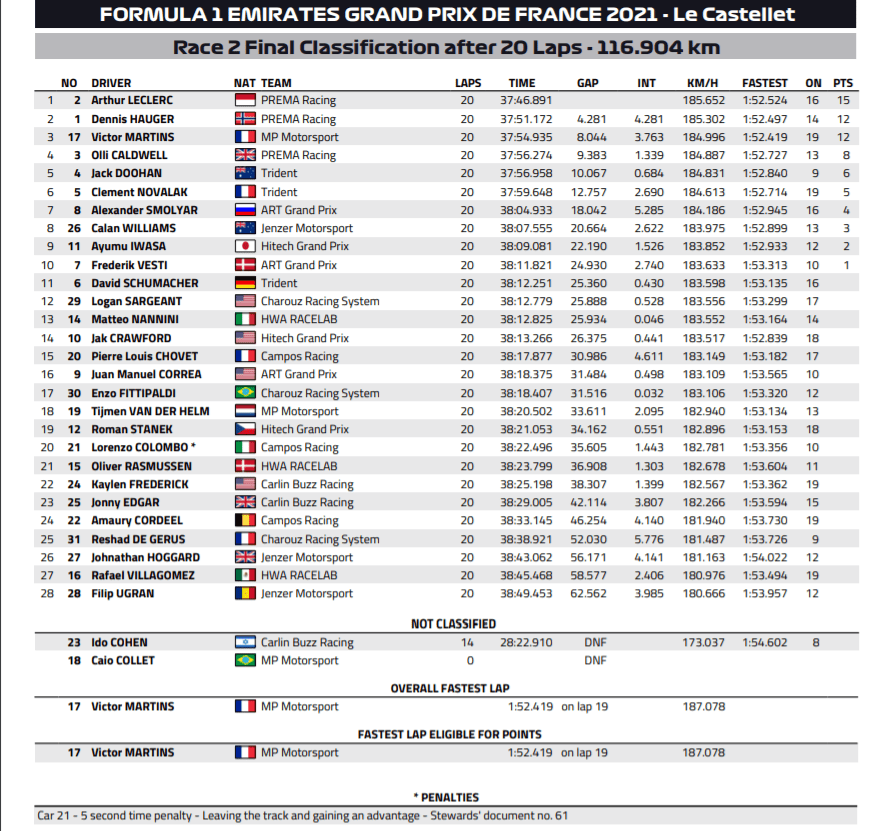 Despite all of the pre-round weather predictions pointing to a hot and sunny weekend in the South of France, the field were thrown the curveball of rain for Race 3, with the wet tyres getting an unexpected run-out. Starting from pole, Vesti seemed ill-prepared for the change of weather, stuttering off the line and sinking back to second behind Championship leader Hauger.

The PREMA Racing driver’s getaway was much better, with the Norwegian finding plenty of grip off the line to storm into the lead ahead of Turn 1. Vesti managed to cling on to P2 as Hauger scampered off into the distance, building a 1.7s gap inside of the first lap. The Dane was sparred a second challenge as Victor Martins struggled at the start as well, getting jumped by Clément Novalak for third.

The rain had stopped by Lap 6, but the track remained slippery and Novalak was opting for a patient approach, quietly bridging the difference between himself and Vesti. All of his hard work was undone in a matter of corners, though, as he finally attempted an overtake on the ART, but wobbled and allowed not only Martins but also Doohan to get ahead.

Unlike his teammate, Doohan wasn’t willing to be patient and threw his Trident down the side of Martins on the main straight to move into the final podium position. The Australian instantly began to catch up with Vesti too. The Dane had managed to defend P2 in the first half of the race, despite a lack of grip, but succumbed to Doohan pretty quickly, running wide at the first corner.

The ART Grand Prix driver lost a further two places with another wobble, this time at Turn 11, allowing MP Motorsport duo Martins and Collet to leap ahead of him too. Doohan was now chasing down the race lead, setting the fastest lap of the race at the time, and cutting six tenths out of Hauger’s 2.6s advantage per lap.

He’d caught up with five laps to go and was told to go for it over team radio. Doohan needed no second invitation, launching past the PREMA down the main straight. Hauger kept on the Trident’s tail and was encouraged over team radio to fight for the position, as opposed to settling for second, but in the end, there was nothing he could do.

The Australian simply had too much grip and too much control, punching the air as he crossed the line. There had been plenty of movement behind them in the closing laps too, as Collet nicked P3 from Martins and Novalak lunged past Vesti for P5. Iwasa had also managed to eke in front of Alex Smolyar for seventh. In the final points’ positions, Juan Manuel Correa held on to ninth and Jak Crawford took 10th. 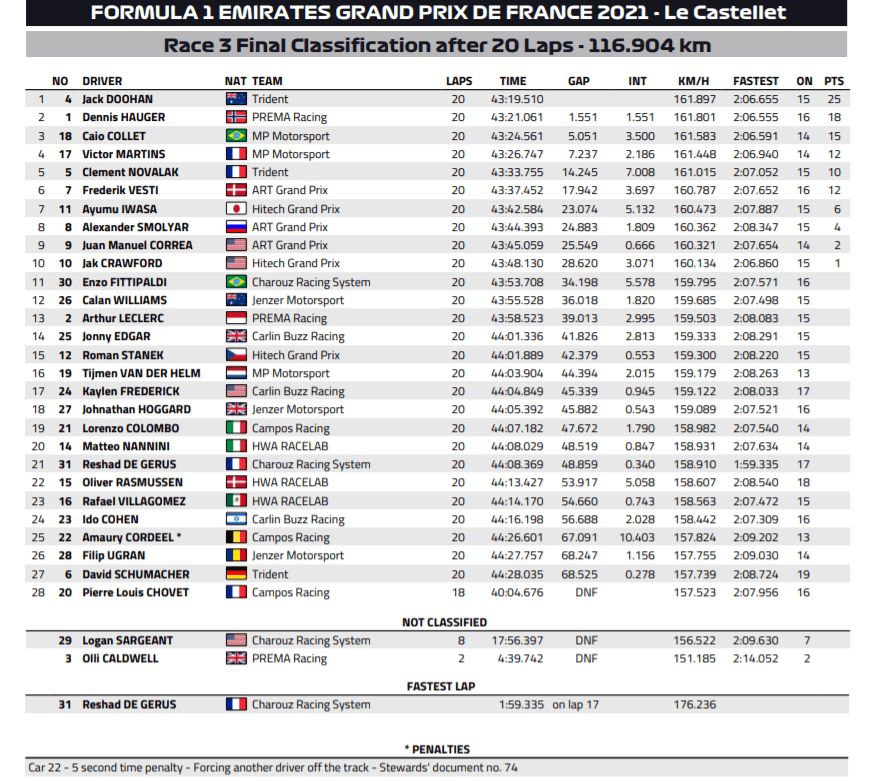 [Note: The above is as per F3 race report with no edits made]