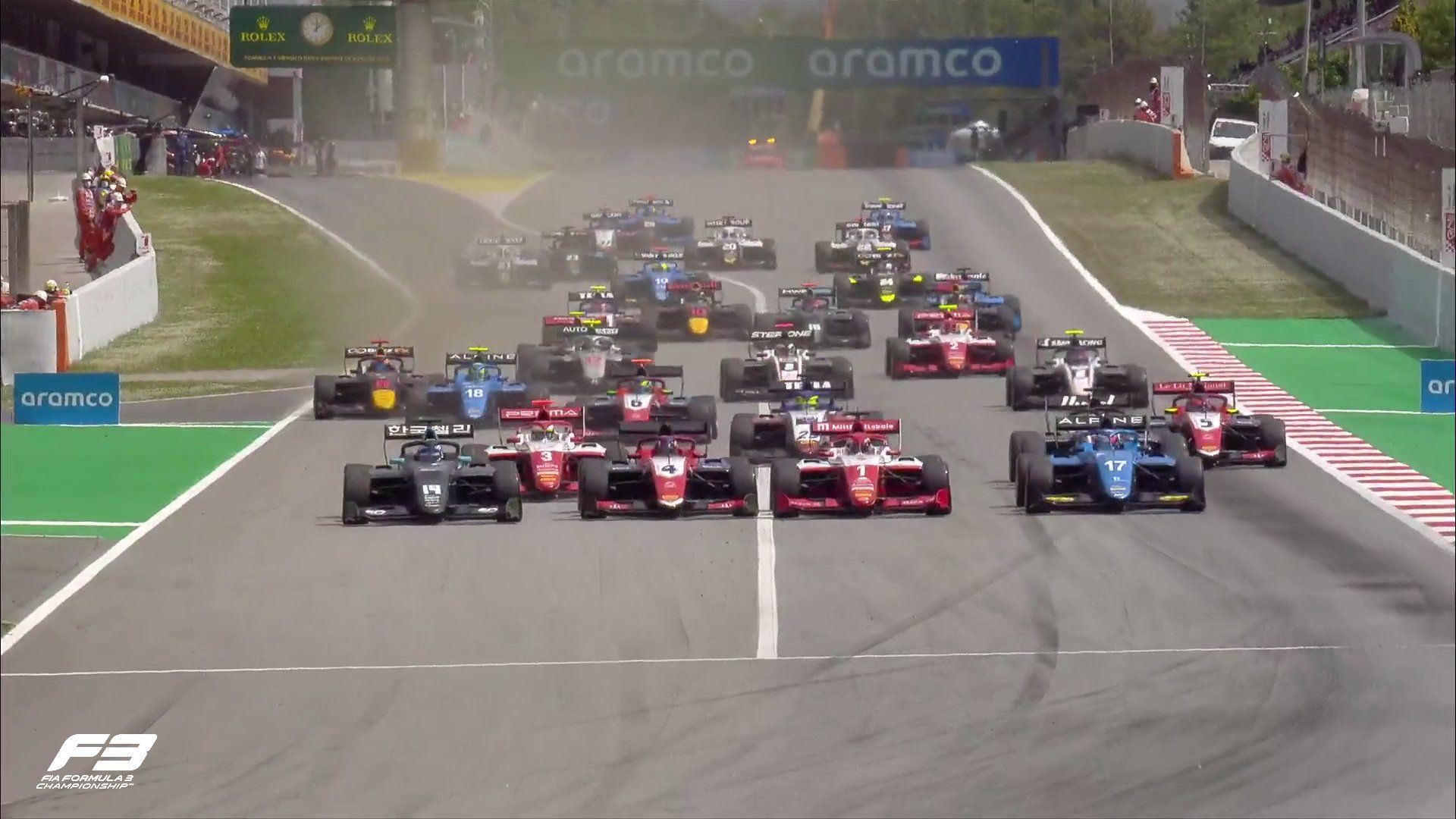 Aleksandr Smolyar, Olli Caldwell and Dennis Hauger started the 2021 F3 season with a win in the three races across the two days of racing in Barcelona.

Carlin’s Jonny Edgar lined-up on pole for Race 1 of the Barcelona F3 weekend in a Top 12 reverse, but it was an aborted start after his teammate Ido Cohen stopped in the final corner. When the race finally got underway, Edgar led the way firmly.

ART’s Aleksandr Smolyar held second despite push from MP Motorsport’s Caio Collet, as Trident’s Clement Novalak and Charouz’s Logan Sargeant held fourth and fifth. The remaining positions in the Top 10 had a supreme fight for points.

In fact, the Russian went past the Brit at Turn 1 to lead Race 1 of F3 weekend, as despite attempts to fight back, Edgar came under pressure  from Collet then. The two touched in the tussle, which allowed Novalak to sneak past both to be second.

Edgar kept third just with Collet and Sargeant still on his tail. But as the race progressed, the Brit’s tyres started to give away, which allowed the Brazilian and the American to get by him. In front, Novalak pushed hard and caught up with Smolyar.

A safety car period towards the end for HWA Racelab’s Oliver Rasmussen’s off in the final corner, allowed Smolyar to hold on to his lead and win the first F3 race of the 2021 season from Novalak, as Collet was third from Sargeant and Edgar.

A solid drive from Caldwell saw him finish sixth from Vesti, as Hauger, Martins and HWA Racelab’s Matteo Nannini rounded out the Top 10, after Schumacher dropped off in the middle stages. The German was 11th from Charouz’s Enzo Fittipaldi. 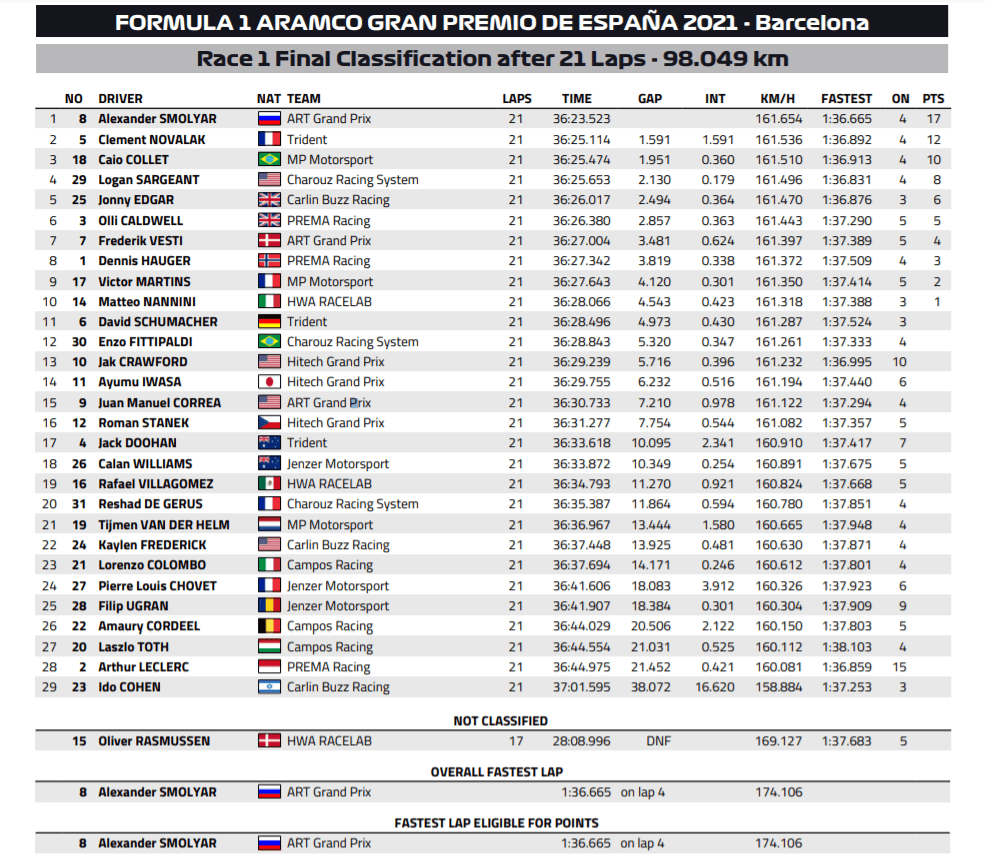 In another Top 12 reverse from Race 1 results, Fittipaldi started on pole from Schumacher in Race 2 of Barcelona F3 weekend. The Brazilian held onto his lead but Nannini pressed hard on the German in the fight for second, with Martins not far behind.

The race was neutralised after a contact between Novalak and Smolyar, which resulted in a puncture for the latter. He collected the back of Sargeant, which ended the race for both. The re-start worked well for Fittipaldi, who led from Schumacher and Nannini.

Martins, however, was cleared soon by Hauger and Caldwell. It was looking stable for Fittipladi up ahead until Schumacher made a superb move to take the lead, but the two continued to tussle, which ended up in a contact on the exit of Turn 1.

Schumacher went for the inside line but was collected by Fittipaldi on the outside. It ended the race for both, which allowed Nannini to lead from Hauger and Caldwell. But not for long as post the re-start, there was another contact between the leaders.

It was the same corner, only this time, both managed to continue but dropped to last. Caldwell benefited from it to lead from Martins and Vesti. Despite attempts from the Dane to pass the Brit, the Prema racer had enough to seal a F3 win in Race 2.

Martins held second from Vesti, with Novalak keeping calm after early scuffle to be fourth from Collet and Edgar. The latter half had four new points finishers with Hitech GP’s Ayumu Iwasa in seventh, whereas his teammate Jak Crawford was ninth.

Trident’s Jack Doohan was eighth, while ART’s Juan Manuel Correa had a handsome return to competitive racing in F3, with his first points in 10th. Jenzer Motorsport’s Calan Williams missed out on points in 11th as both Hauger and Prema’s Arthur Leclerc were penalised.

Hauger had it for causing a collision when he collected Nannini, while Leclerc got it for safety car infringement – both, anyways, finished outside the points. 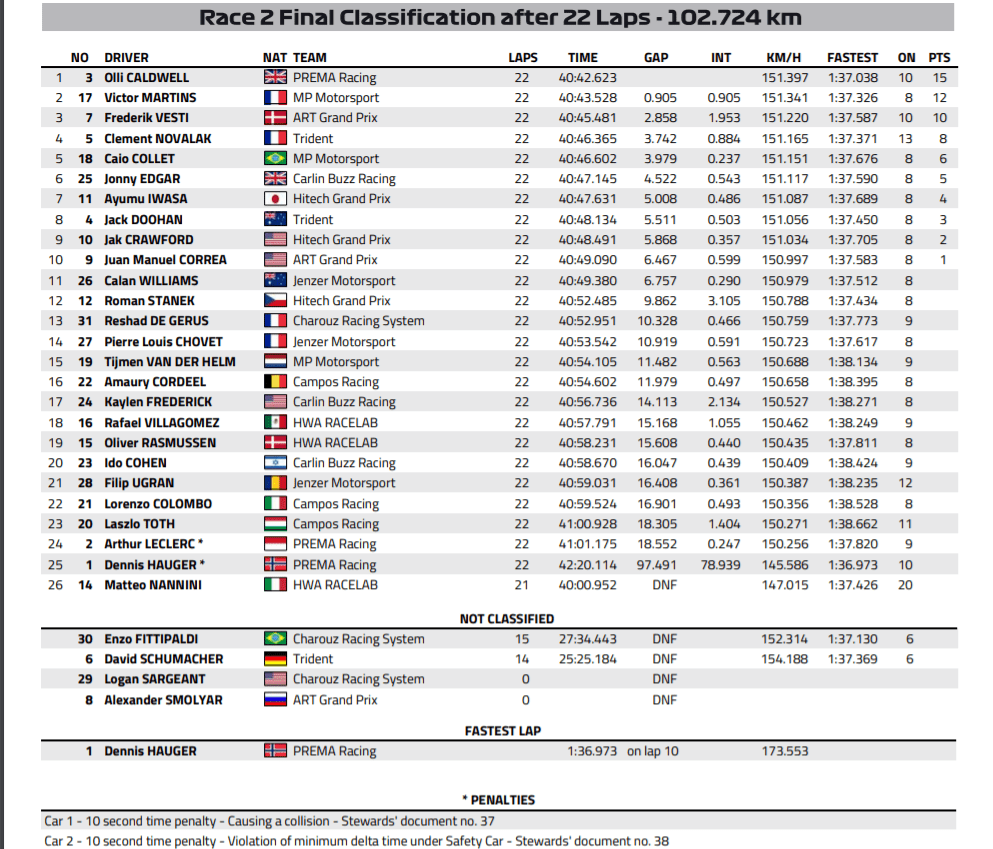 It was a mad start to Race 3 of Barcelona F3 weekend, as a four-way fight leading into Turn 1, had pole-sitter Hauger held onto his lead from Nannini and Martins, as Doohan lost a bit of a ground in that, with Caldwell just behind him in Top 5.

As Hauger lead the way, Doohan got back third from Martins, as Sargeant took sixth from Novalak, with Vesti, Collet and Schumacher in the Top 10. There was another place gained for the Australian after he cleared Nannini for second, but couldn’t build a gap.

He started to lose time along with Nannini, as there was a train of cars behind, which went until 12th. The gap started to broaden, where Hauger continued to lead from Doohan and Nannini. Behind, Caldwell cleared Martins for fourth, as positions changed behind.

Sargeant not only lost sixth to Novalak, but also seventh to Vetsi, after he had a slight off in the final corner. Collect hurried him in ninth, as Hitech GP’s Roman Stanek moved up to 10th after clearing Schumacher, who lost to Smolyar too.

At the front, it was Hauger to win the final race of F3 weekend, with Doohan and Nannini rounding the Top 3 from Caldwell, Martins, Novalak, Vesti, Collet, Sargeant and Stanek in the Top 10 – where the American dropped a place to the Brazilian.