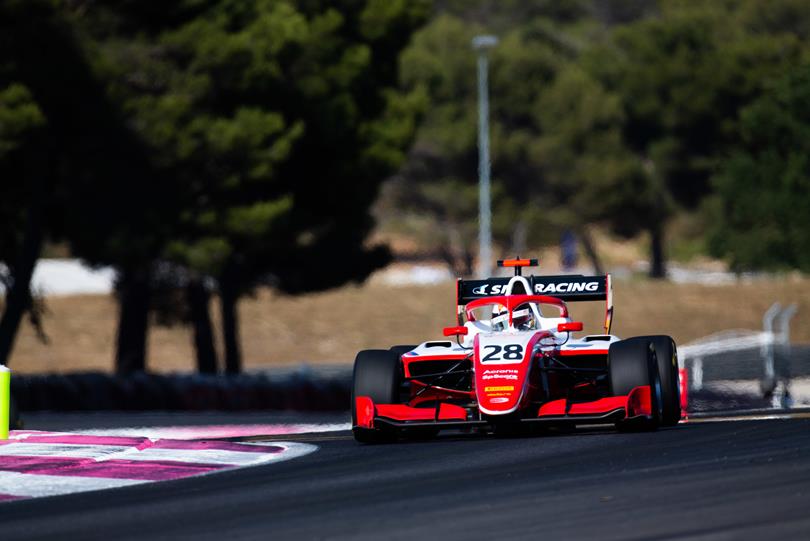 It was a good start from reverse grid pole-sitter and Campos Racing’s Alex Peroni as he led the sprint F3 race at Paul Ricard from Jenzer Motorsport’s Yuki Tsunoda with HAW Racelab’s Bent Viscaal shooting up to third after Prema’s Marcus Armstrong stalled on the line.

The Kiwi got going but dropped to the back of the pack like Carlin’s Teppei Natori, who also stalled at the start. Behind the Top 3, Trident’s Pedro Piquet held fourth from Prema’s Robert Shwartzman as their was a five-way battle for sixth.

MP Motorsport’s Liam Lawson led the way from Hitech GP’s Juri Vips, ART Grand Prix’s David Beckmann and Prema’s Jehan Daruvala, but Lawson went off track which dropped him to 10th as Beckmann had a puncture to drop out as well.

Daruvala, meanwhile, cleared Vips to be sixth as he closed in on the leaders ahead. Shwartzman was lapping way quicker than the leaders as he cleared Piquet first when Tsunoda took the F3 race lead from Peroni but the Russian was right behind.

The Ferrari junior eventually made a move in the approach to the chicane with him clearing both Tsunoda and Peroni to take the F3 race lead with the Australian going off and losing more places to Piquet and Daruvala in the process to be fifth.

With Shwartzman leading, Piquet and Daruvala passed Tsunoda to be second and third but all three were bunched up close together. The Indian went purple and passed Piquet with five laps remaining to make it a double win from the second F3 weekend.

Behind them, Piquet held third from Tsunoda but the Japanese had a time penalty for forcing Peroni off track. The Australian anyways started to lose more places as MP Motorsport’s Richard Verschoor slotted in fifth from Lawson.

Like Verschoor, even Trident’s Niko Kari fought his way up to seventh as Vips was eighth but had a time penalty to his name. Meanwhile, the fight at the front started to move to Shwartzman’s way as the Russian upped his pace seeing Daruvala in his sight.

It was all good in the end as Shwartzman eased in to win Paul Ricard’s sprint F3 race and extend his points lead with Daruvala losing ground towards the end as Piquet passed him for second with the Indian having to settle for third in the title fight.

Behind him, Verschoor had a superb outing to be fourth from 14th on the grid as Armstrong fought through the field to end up fifth with Lawson in sixth ahead of HWA Racelab’s Jake Hughes, who made up an astonishing 19 places in the race.

Meanwhile, Carlin’s Logan Sargeant ended up eighth to score the last point after Tsunoda lost his points finish due to a time penalty to be ninth, with Carlin’s Felipe Drugovich rounding out the Top 10 just inches ahead of Jenzer’s Andreas Estner.

Having been in the podium position early on, Viscaal dropped to 20th while early race leader Peroni ended up 14th and Vips was 17th from points position. It was also disaster for Kari after a late puncture which forced him into retirement.