With the weather predicted to be bad for Saturday, the FIA pre-poned Race 1 to Friday evening, where the reverse qualifying starting grid put MP Motorsport’s Victor Martins on pole with Charouz Racing System’s Logan Sargeant joining him in the front row. Hitech GP’s Jack Crawford was third and F3 points leader Dennis Hauger in fourth.

The Lap 1 saw an incredible start by the Top 3 in Turn 1 as positions remained intact, but Turn 3 saw Sargeant snatch the lead from Martins. Further back, F3 title contender Jack Doohan dropped down into P15 from P12 in his Trident machine.

At the front, Hauger passed Crawford to third on Lap 4. He showed his intent and pace after clocking the fastest lap and by Lap 8, the Prema driver had closed the gap to Martins – he went from 0.7 seconds to 0.5 seconds in couple of laps. Hauger’s attempts in overtaking Martins succeeded on Lap 11 as the Norwegian, in Turn 3, activated DRS and put himself into P2.

It was far from over for him, however, as his sights were zeroed in on the Charouz in front of him. The Lap 10 saw Prema’s Arthur Leclerc go up into an astonishing P9 from his P14 race start. This pushed ART’s Frederik Vesti further down into P10. Lap 16 brought out the Virtual Safety Car as MP Motorsport’s Tjimen van der Helm came to a stop at the side of the track.

After one lap under VSC, racing resumed and Hauger was closing in on Sargeant with the gap reduced from 2.2 to 1.9 seconds by Lap 17. With two laps to go, Hauger was only one second behind the American. The action in front continued as Trident’s Clement Novalak moved up into P4 after passing Caio Collet’s MP Motorsport.

The final lap was as intense as it could get for Hauger, as he was only 0.6 seconds behind the race leader. Sargeant was, however, able to hold on to P1 until the end to take home his first win of the F3 season, much to his delight after originally not intending to compete in the championship due to financial troubles.

Hauger had to be content for second but it was enough to hand him the 2021 F3 drivers’ title. Martins rounded out the podium from Novalak, Collet, and Campos Racing’s Lorenzo Colombo. Leclerc ended up in seventh and Vesti eighth. The Top 10 was rounded out by ART’s Juan Manuel Correa and HiTech’s Ayumu Iwasa. 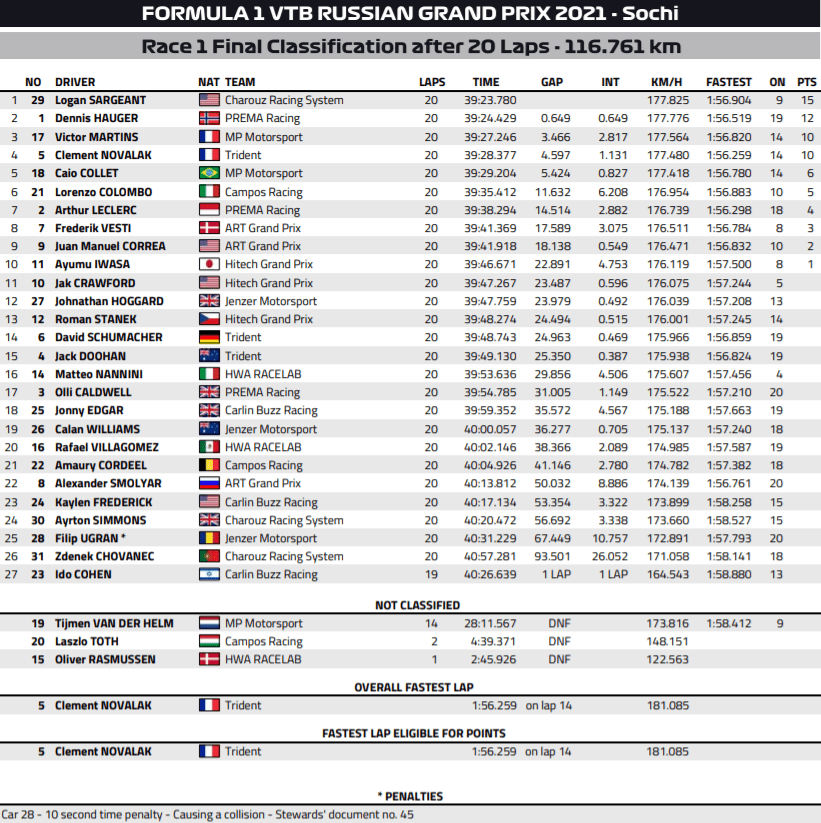 Doohan and Novalak remained one and two heading into the first corner of the 2021 F3 season’s final race. With Hauger stuck in ninth, and Leclerc and Caldwell both out of the points, Trident had provisional jumped PREMA in the Teams’ title race.

Vesti briefly lost a couple of places to Juan Manuel Correa and Lorenzo Colombo at the start, dropping to sixth, but recaptured them both when the Campos driver lost his footing and tumbled down the order. This sparked a titanic six-man brawl between Correa in sixth and Alex Smolyar in 12th. Hauger was in amongst it and attempted to force his way through the traffic, but he was tagged by Rasmussen and sent spinning across the track.

The HWA RACELAB driver recovered to 15th but was later handed 10s penalty for causing the collision, as Hauger dove into the pits for repairs and returned at the back of the field. Meanwhile, Sargeant was up to fifth, ahead Crawford, Leclerc, Correa, Ayumu Iwasa and Alex Smolyar.

There was a nervy atmosphere on the Trident pit wall as Doohan and Novalak began to brawl for first. Novalak attempted a brave move at the first turn, going side-by-side with his teammate, but the Frenchman locked up and missed the corner. Vesti had passed Johnathan Hoggard for the final podium spot and was watching keenly while the front two continued to tussle, as orders came from the Trident pit wall telling Doohan not to fight his teammate.

Vesti had passed Johnathan Hoggard for the final podium spot and was watching keenly while the front two continued to tussle, as orders came from the Trident pit wall telling Doohan not to fight his teammate. Yet, their battle continued. Novalak momentarily took first from the Australian at the chicane, but Doohan fought back and retook it down the straight.

All the while, Vesti was watching on. The Dane was within one-tenth of Novalak, whose tyres were looking worse for wear. Vesti found space at Turn 12 and squeezed past going into 13, taking second from the Frenchman. Novalak was staying within DRS range and kept Vesti busy as Doohan closed out the race win and secured Trident the Teams’ title.

Logan Sargeant and Crawford nabbed fourth and fifth from Hoggard in the final laps. The Jenzer Motorsport driver was followed by Leclerc, Martins and Iwasa. Caldwell completed a sterling recovery drive to grab the final points’ place.

The Race 1 story was written by Selena Aburas, while Race 2 is from press release