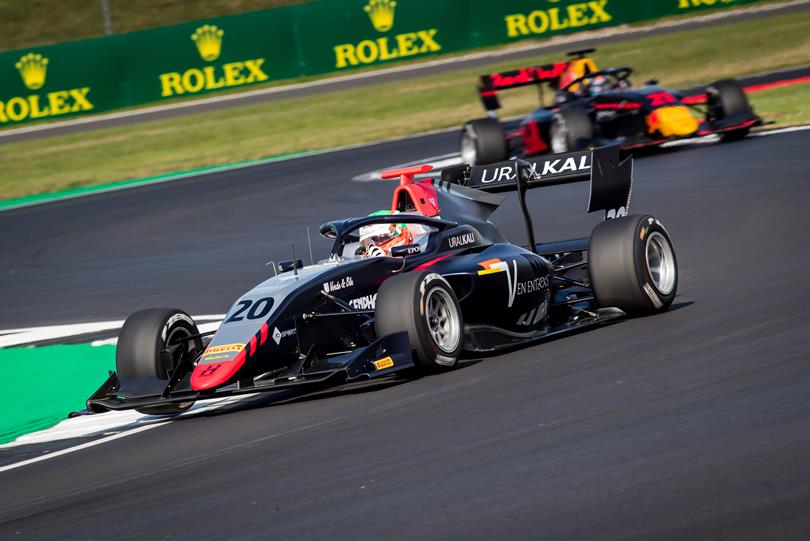 It was crucially Robert Shwartzman ahead of Jehan Daruvala and Marcus Armstrong, with the Kiwi fighting off ART’s David Beckmann in the Top 8 after feature F3 race winner Juri Vips dropping to 11th in his Hitech GP car after an off moment.

As Lawson led the way in the front, Pulcini started to close in on Piquet and he eventually made the move to take second. A few laps later, the Italian went around the outside in a left-hander to take the race lead with Lawson then defending from Piquet.

The fight for fourth was heavy with Lundgaard leading Shwartzman, Daruvala, Armstrong, Beckmann, Vips and HWA Racelab Jake Hughes close behind. Shwartzman eventually made the move to take fourth after an off for Lundgaard, with Daruvala following him.

At the same time, Vips tried a move on Beckmann for the final point but ran wide to lose out to Hughes. Meanwhile, as Piquet tried to challenge Lawson, the Brazilian lost out to Shwartzman, who then passed Lawson as well to take second.

As the fight in the pack continued, Pulcini eased in to score his first win of the F3 season and make it a double for Hitech GP with Shwartzman re-taking the F3 points lead with a fine fightback to second as Red Bull junior Lawson scored his first podium.

The Kiwi had tremendous pressure from Piquet and also Daruvala but in the fight for positions, the Indian clipped the rear of the Brazilian which sent him into a spin as both retired immediately. It was a huge loss of points for Daruvala in the title fight.

The incident helped Armstrong to be fourth as the Kiwi passed Lundgaard on the final lap with Beckmann ending up sixth from Jenzer Motorsport’s Yuki Tsunoda and Sauber Junior Team by Charouz’s Fabio Scherer in the points scoring position.

While Shwartzman scored the points, it wasn’t a great outing for Daruvala as well as Vips, who eventually finished 13th after a tangle with Hughes which forced the latter to retire. The move is put under investigation by the stewards.

UPDATE: The stewards handed a five second penalty to Vips as he was deemed responsible for hitting Hughes which caused the latter to retire. It dropped the Red Bull junior to 15th as a result with Sargeant moving to 13th and Fernandez to 14th.