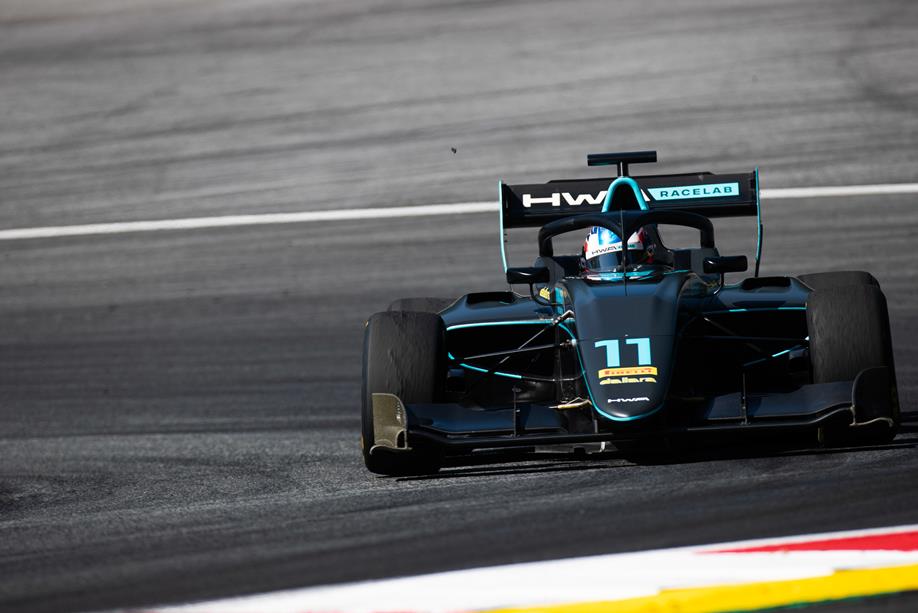 Trident’s Pedro Piquet spun to the back at Turn 1 from third on the grid as Hitech GP’s Juri Vips was fifth ahead of MP Motorsport’s Richard Verschoor, Prema’s Jehan Daruvala and ART Grand Prix’s Max Fewtrell in the Top 8 points scoring positions.

In a three-way fight for the lead, Shwartzman made the most of the wide moment for Zendeli, Hughes and Armstrong as it allowed the Russian into the lead with Armstrong slotting into second ahead of Hughes as Zendeli started drop at the lower end of Top 10.

The Top 3 stayed as Shwartzman, Armstrong and Hughes but behind Fewtrell started to make inroads as he cleared Vips, Verschoor, Zendeli and Daruvala to be fourth with Zendeli then trying to keep off Daruvala, who had Hitech GP’s Leonardo Pulcini behind.

Vips was the biggest loser in all as he dropped to the back of the Top 10 along with Verschoor. Meanwhile, Daruvala made the move on Zendeli at Turn 1 but a wide moment allowed Pulcini to sneak through as VSC was deployed for an incident.

Once green, Daruvala fought back to take fifth from Pulcini in a wheel-to-wheel fight for two laps and then made it stick on Fewtrell at one go to be fourth as his teammates Shwartzman and Armstrong started to battle for the F3 race win.

The Ferrari juniors were at it as Armstrong went for a move and got ahead at Turn 1 but Shwartzman fought back in the next few corners to retake the lead as Hughes sat behind. As the fight intensified, there was another VSC period to calm things down.

The drivers were radioed to take it slow but post-VSC, the fight continued and they made contact eventually. Armstrong got in front but his right rear touched the front wing of Shwartzman with the Kiwi dropping out while the Russian had Hughes on his tail.

Shwartzman continued on with a broken wing but managed to fend off Hughes for the sprint F3 race win. However, Shwartzman was handed a five second penalty which dropped him to third and elevated Hughes to his first F3 win of 2019 in the sprint race.

Crucially, Daruvala jumped to second to score more points to Shwartzman with eight now separating the two in the F3 title fight. Fewtrell was fourth with Pulcini in fifth as Vips recovered to sixth ahead of Zendeli with Trident’s Niko Kari scoring the last point.

The Finn benefited from Armstrong’s plight, who was classified in 19th. Even with no points scored but Trident’s Devlin Defrancesco and ART’s David Beckmann fought their way through to ninth and 10th with Jenzer’s Yuki Tsunoda just missing on a Top 10 finish.

After falling to the back, Piquet moved up to finish 15th. Meanwhile, outside the two Prema collisions, there was another team whose debrief will be tasty after Campos Racing’s Sebastian Fernandez and Alexander Peroni collided to cause the second VSC period.