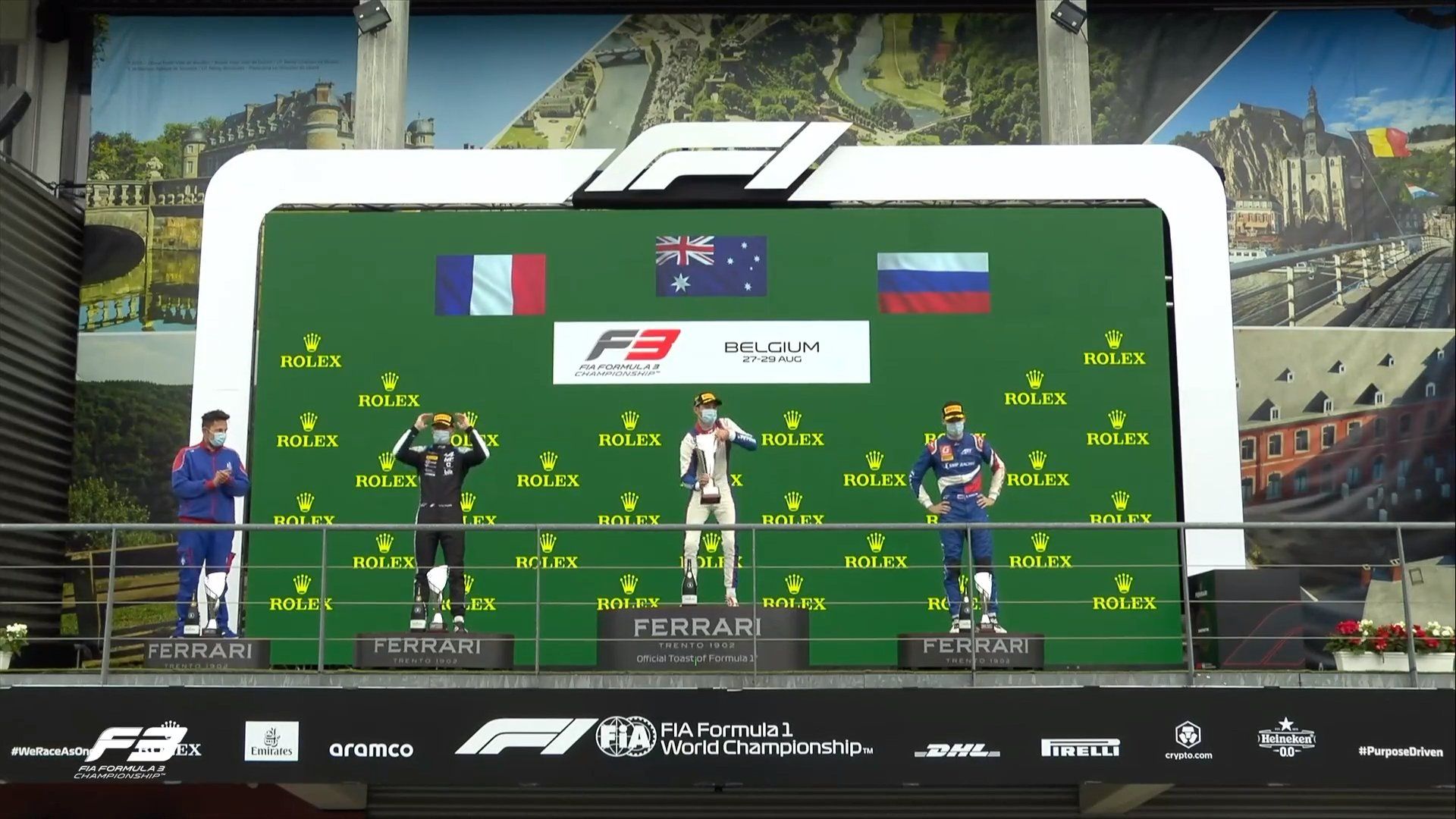 Lorenzo Colombo won Race 1 of the Belgium F3 weekend at a wet Spa-Francorchamps, as Jack Doohan took two to close in on Dennis Hauger.

The morning rain delayed lights out by an hour, followed by the first three laps under safety car. They eventually got going, with Colombo managing an amazing start at Lap 4 through La Source and was able to pull away from Crawford. Stanek was right behind the pair, defending from Jenzer Motorsports’ Jonathan Hoggard who was fourth.

There was further enjoyment behind, which saw MP Motorsport’s Caio Collet and Victor Martins racing through Les Combes and Malmedy overtaking the Charouz Racing’s of Logan Sargeant for P8 and P9 respectively, leaving Sargeant in P10.

Lap 5 saw the continuation of Collet’s racing through the track as he overtook Trident’s Clement Novalak for P7 at Les Combes. Colombo, meanwhile, had opened up a 3.313s gap to Crawford, with no spray and clear visibility it seemed to be widening, which it did as by the end of Lap 7, Colombo had a 5.468s lead.

Collet saw himself at the back of ART Grand Prix’s Frederick Vesti on Lap 9, just barely avoiding what could’ve been a collision at La Source, but the Brazilian ran wide and dodged disaster but failed to take P6 with Vesti retaining his position when he exited the hairpin.

Down this straight, Collet entered the battle and passed Vesti, Schumacher, and Hoggard in the spray, but doing so off the race track. The move cost the Brazilian a 5 second time penalty. Lap 14 saw Collet’s P4 overtaken by Vesti. The checkered flag saw Colombo’s first F3 victory with a whopping 15 second lead ahead of Crawford in P2, who was two seconds ahead of Stanek in P3.

Vesti was able to hold on to P4, as Collet’s penalty dropped him down to P9, promoting Martins to P5. Hoggard, Novolak, and Sargeant in P6-P8 respectively. ART Grand Prix’s Alexander Smolyar got the last of the points in P10. Schumacher P11, and Trident’s Jack Doohan in P12, starting in pole for Race 2. 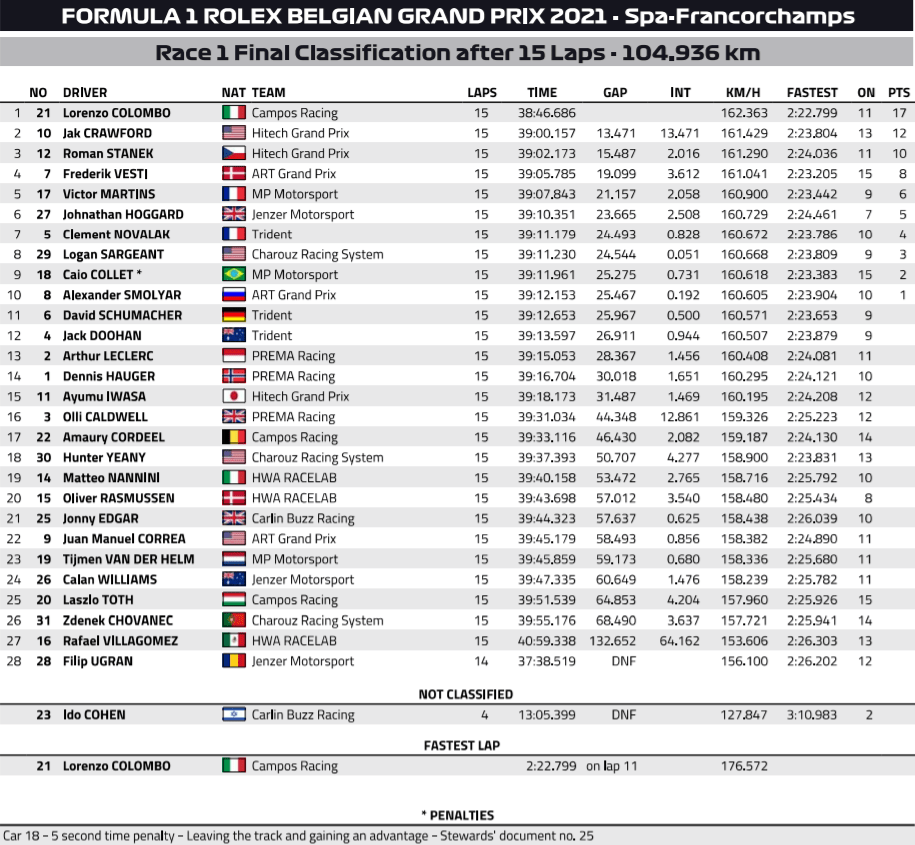 This time around, it lights out from the start/finish line in F3 Race 2 despite the delayed start due to red flag in F1 qualifying. Doohan had an incredible start to the second race, with teammate Schumacher behind in P2 and Sargeant in P3 after he forced Smolyar wide off the track, and gained two positions from P5.

Vesti also climbed up the grid, moving himself up to P6 from P9 on Lap 1. Prema’s Arthur Leclerc and Hoggard fought hard for P9 in Lap 4, with the Brit sent spinning by the Monegasque, who retained the position. This sent Hoggard spiralling down the grid places, urging double yellow flags in sector 2.

Exceeding track limits at Turn 9 had become a problem for the drivers, with Campos Racing’s Amaury Cordeel handed two 5 second time penalties, and others warned in pulling those same moves again. Lap 10 saw HWA Racelab’s Matteo Nannini spin at the final Chicane after losing his rear, before the pit entry, prompting the yellow flag and virtual safety car.

The increase in volume of rain prompted a full safety car in Lap 11 up until the end of Lap 13. Doohan maintained his lead through the first corner into Eau Rouge with a lead of 1.009s over Schumacher in P2. La Source also saw PREMA’s Dennis Hauger overtake teammate Leclerc for P9 and an additional point.

The safety car was not done yet at Spa, though, as it was deployed in Lap 14 itself. A collision at Eau Rouge between Jenzer Motorsport’s Calan Williams and Cordeel, both were okay and out of their cars. The race eventually finished under safety car, with Doohan securing his second F3 victory, and Schumacher in P2, for a Trident 1-2.

Sergeant in P3 ahead of Collet, Novolak, Vesti, respectively. Martins P7, Smolyar P8, and Prema’s Hauger and Leclerc in P9 and P10. 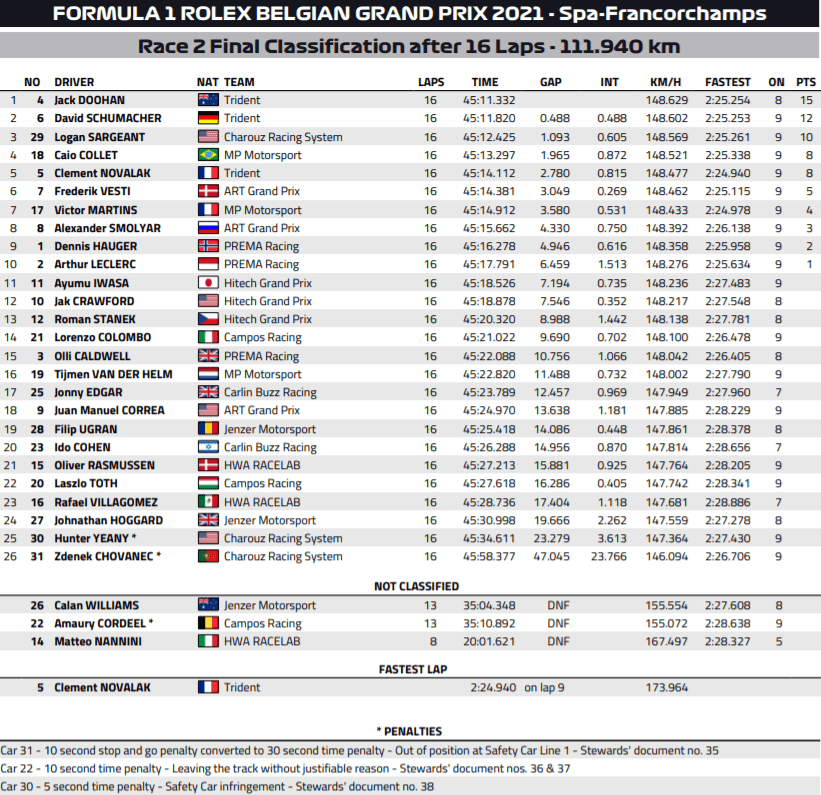 The qualifying put Doohan on pole position joined by Martins and Smolyar in P2 and P3. The 14 lap race started with two formation laps under the safety car due to the rainfall on Sunday, and the amount of spray that was generated. Lap 2 saw Doohan just extend his lead in front of Martins by 0.526s, but Martins still gave the Australian all to worry about as he was on his track with the lead in sight.

Lap 2 saw HWA Racelab teammates Matteo Nannini and Rafael Villagomez make contact, leaving Nannini with a puncture in his rear left tyre that he immediately pitted for. While the former continued the race, Villagomez was forced to retire. Hauger was set on a mission in Lap 2, starting P14, with the Norwegian climbing up the positions reaching P12 and challenging Crawford’s Hitech car for P11, ultimately hanging back but then overtaking him later for that P11 spot in Lap 3 at Les Combes, Turn 5 and 6.

Hauger had a similarly important Lap 5 where he overtook Hoggard for P9 and an additional point towards his championship title run. Lap 5’s importance didn’t end with Hauger, as Martins, who was running in P2 made a bold move on race leader Doohan to take the lead away from him at Pouhan. However, the move by the Frenchman was made with all four tyres over the track limit, so ultimately Martins had to give the place back in Lap 6.

Schumacher in P8 was being extremely pressured by Hauger behind him through Lap 10, where the Norwegian ultimately passed him for P8. Vesti mustered all he can to also do his share in gaining a position as he raced Sargeant side by side through Eau Rouge, then overtook him on the Kimmel straight for P6.

The checqered flag saw Doohan become the first driver to win two F3 races in the same weekend. Martins followed with a P2 and Smolyar in P3. Collet, Novalak, Vesti, and Sargeant followed in P4-P7. Hauger maintained his gap over Schumacher, with them finishing P8 and P9 respectively. Leclerc took the P10 position and the last of the points.

Dennis Hauger’s P8 position in Race 3 does help in adding more points to his championship title fight, but Doohan is right behind him, with his two race victories this weekend, the gap has decreased monumentally with only 25 points separating him for the Prema driver for the Championship lead. 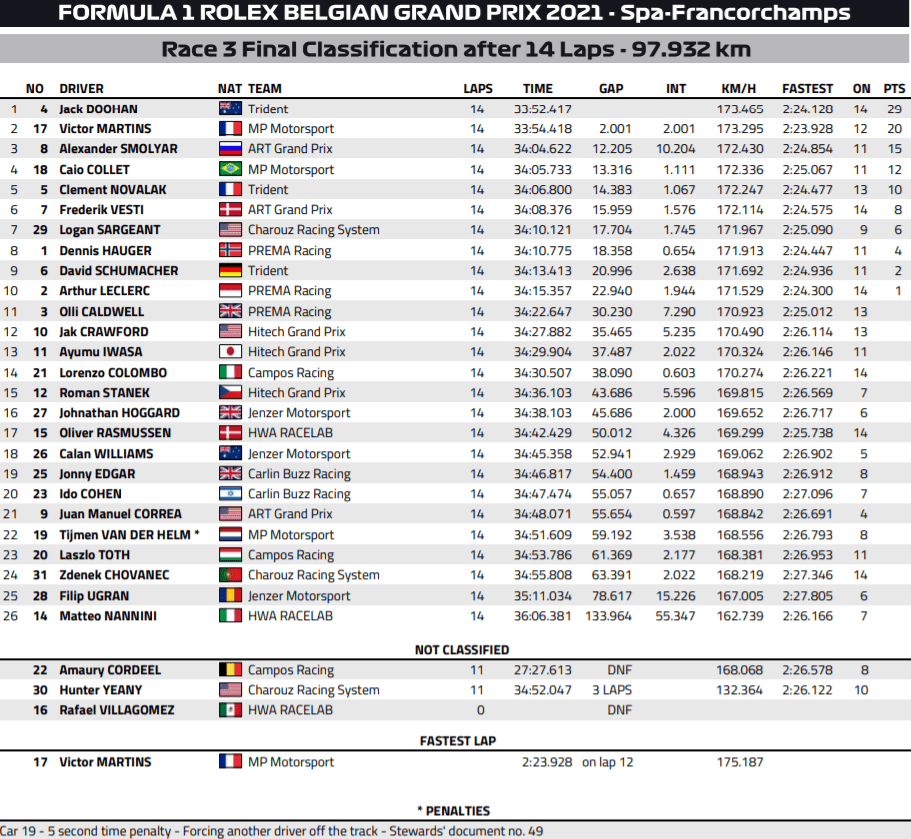