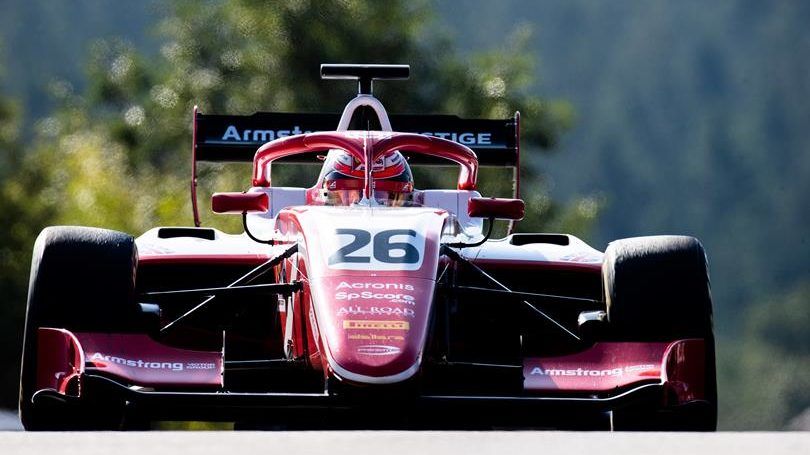 After a tribute for F2 racer Anthoine Hubert, the delayed sprint F3 race got going at a cloudy Spa-Francorchamps circuit with reverse grid pole-sitter and Prema’s Armstrong led the way in the front.

A scrap for second saw Jenzer Motorsport’s Yuki Tsunoda slot in the place after the Japanese driver’s lock-up in Turn 1 pushed the Hitech GP duo Leonardo Pulcini and Juri Vips off circuit.

While Pulcini rejoined in fifth, Vips dropped to eighth. ART Grand Prix’s Christian Lundgaard was third as Prema’s Robert Shwartzman climbed up to fourth, with teammate Jehan Daruvala in sixth.

The Indian had feature F3 racer winner, Trident’s Pedro Piquet on his back as Vips defended from ART’s Max Fewtrell and David Beckmann for the final points position, which he lost to Fewtrell later on.

There was a spin for MP Motorsport’s Liam Lawson in the final corner as he and Carlin’s Logan Sargeant were put under investigation. Trident’s Niko Kari retired then as MP Motorsport’s Simo Laaksonen crashed out.

The Finn’s crash had the safety car in action as Armstrong led Tsunoda and Lundgaard in the Top 3, with Shwartzman in fourth from Daruvala, who cleared Pulcini for fifth. Piquet and Fewtrell rounded the Top 8.

Replays of the crash showed Laaksonen going under the tyre barrier at Blanchimont when fighting with Campos Racing’s Alexander Peroni, with the emergency crew in place to get him out and re-position the barrier.

The re-start worked well for Armstrong has led the way with Tsunoda coming under pressure from Lundgaard but he held his place. Behind, Vips had a collision Fewtrell causing for his front wing to come lose.

He had to complete the whole lap and was shown a black and orange flag. There was a collision between HWA Racelab’s Jake Hughes and Trident’s Devlin Defrancesco as the Canadian hit the back of Hughes.

They were put under investigation straightaway. At the front, it was Armstrong leading comfortably as battles were on from second until fifth. The fight for sixth saw Piquet go past Pulcini.

Just then Fewtrell lost the last point when he retired due to a puncture with Carlin Teppei Natori slotting in eighth. Meanwhile, the fight for second intensified with Lundgaard making a move on Tsunoda.

The Dane surprised the Japanese at the end of Kemmel Straight as Shwartzman tried a look in too. Tsunoda came back on Lundgaard and made the move stick to retake second with two laps to go.

Lundgaard lost another place to Shwartzman with Daruvala having a look in. At the front, Armstrong eased in to win the sprint race – his second F3 win of the 2019 season, with the fastest lap in his bag too.

Red Bull junior Tsunoda did well to take second, his first podium in F3 as Shwartzman extended his points lead after finishing third ahead of Lundgaard, Daruvala, Piquet and Natori in the points position.

The Japanese held off Carlin teammate Felipe Drugovich towards the end to take away his first F3 point as Hitech GP’s Yi Yifei rounded out the Top 10 position, with MP Motorsport’s Richard Verschoor missing out.

There was a late incident when Sargeant locked-up as the two Sauber Junior Team by Charouz drivers Lirim Zendeli and Raoul Hyman came together, with all three retiring.