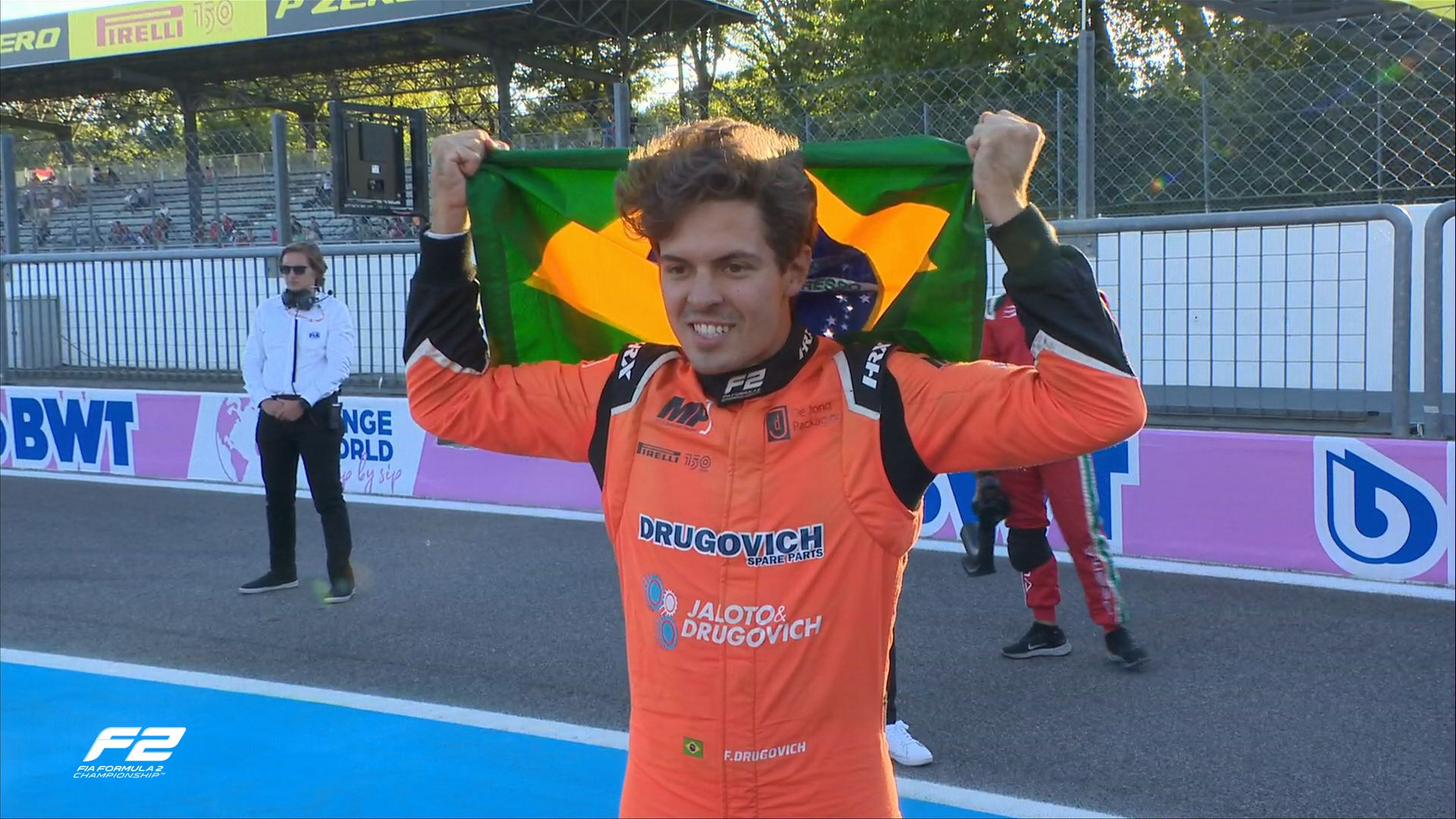 Reverse grid pole-sitter Frederik Vesti made a good start in sprint F2 race at Monza in his ART car but a slow one from Carlin’s Logan Sargeant saw him drop to fifth behind Hitech GP’s Juri Vips, DAMS’ Ayumu Iwasa and Prema’s Jehan Daruvala.

Trident’s Richard Verschoor was sixth from Hitech GP’s Marcus Armstrong and Virtuosi Racing’s Jack Doohan in the Top 8 points position. Behind this, F2 points leader Felipe Drugovich had a run-in at Turn 4 which ended his race after damage to MP Motorsport car.

He was fighting with VAR’s David Beckmann when the two touched and Drugovich’s suspension broke. The Brazilian then had to watch the race from the pit wall, as the safety car was deployed for another incident at Turn 1 on Lap 1.

It involved Charouz’s Tatiana Calderon and Campos’ Olli Caldwell, with both retiring. The re-start didn’t work well for Vesti who lost the sprint F2 race lead to Vips at Turn 1, with Iwasa in third from Sargeant, who cleared Daruvala at the same corner.

Likewise Armstrong passed Verschoor for sixth, with Doohan maintaining eighth. Just outside the points places, ART’s Theo Pourchaire climbed up to 11th in a the bid to keep the F2 championship alive, as a frantic fight was on to get to the points.

As the things settled in front, there was contact between MP Motorsport’s Clement Novalak and Campos’ Ralph Boschung which ended both their races. There was movement up front, with Daruvala the driver on the move with strong pace from the Indian.

He cleared Sargeant to retake fourth and cleared Iwasa as well to get up to third behind Vesti. The Japanese driver lost fourth to the Brit then, as Armstrong had to defend sixth from Verschoor and Doohan where the Dutchman soon passed the Kiwi.

Amid all of this Iwasa continued to lose places and eventually dropped outside the points, with Armstrong then under pressure from both Doohan and Lawson. Behind them, the hopes of Pourchaire dashed further when he had an off at Turn 1 to drop to last.

At the front, Vips controlled pretty much to win his first F2 race of 2022 at Monza as despite late push from Vesti, the Estonian held it on with Daruvala completing the podium. Sargeant kept fourth after late push from Verschoor.

Lawson ended up sixth from Doohan, with Beckmann ending up in points after late penalty to Armstrong who dropped to 10th as a result. Amid all of this, Drugovich secured the 2022 F2 title with three races to spare after zero points to Pourchaire.

#F2 #ItalianGP Results Sprint Race and eventhough @FelipeDrugovich retired from the race, he still be crowned CHAMPION OF 2022 as Pourchaire couldn't get enough momentum to score points and keep the championship alive. #MsportXtra @F2Inside @OfficialMPteam pic.twitter.com/LLLO1cOv6S

Colapinto covered off Collet from the launch to take the inside line into Turn 1. Through the Curve Grande, Martins made contact with Arthur Leclerc and the Frenchman was sent off into the gravel, dropping down the order to 27th. He recovered up to 23rd by the end of the second lap. Leclerc fell to 13th as a result, swamped by those around him into the second chicane after losing momentum due to the contact.

The Safety Car was deployed on Lap 4 after Zak O’Sullivan came unstuck into Turn 1. Missing his braking point, he had to take avoiding action to steer clear of teammate Brad Benavides and tagged the barriers as a result.

Racing resumed entering Lap 9 with Colapinto going as late as possible in his attempts to retain the lead. Into Turn 1 Josep Maria Marti locked up, running deep from third in the order and lost position to Jonny Edgar as he rejoined beyond Turn 2.

Hadjar’s title hopes suffered another blow on the restart after he damaged his front wing in contact with Kush Maini at Ascari. He was forced to pit for a new one on Lap 10. Bearman was also in the wars but escaped damage following a tag from Frederick behind, as the Championship contenders weighed up risk versus reward going wheel-to-wheel.

Bearman had overtaken Marti twice into Turn 1 across Laps 10 and 11 but on both occasions, the Campos man fought back through into Turn 4 with the slipstream. A mistake at the second Lesmo for the Spaniard undid his great defensive work, and dropped him to 7th, promoting Bearman, Crawford and Maloney into fourth, fifth and sixth respectively.

Bearman slowly recaught the fight for the podium places and was dragging the DRS train behind him along the way. Colapinto was keeping Collet at arm’s length but backing up the MP Motorsport man and Edgar towards the pursuing pack in the process.

Entering Lap 15, Bearman was well within DRS range of the Trident driver in third and as Edgar attacked Collet into Turn 1, the PREMA man dived down the outside and took two places in one corner with a brilliant overtake. As Collet defended from Edgar to stay on the podium, Bearman edged ever closer to leader Colapinto. Into the final lap, the gap for the race win was down to 0.6s.

Maloney was the next title contender to shape a move for the podium. The pack from fourth down to 14th were nose-to-tail. Stanek had dropped down the order and out of the second Lesmo, Martins’ comeback drive relegated the Trident driver to P12 in a straightforward pass.

On the final lap, Bearman got the gap down to 0.1s to Colapinto out of Ascari and dived to the outside of Parabolica for a move. The Argentine defended just enough to dissuade Bearman from attempting the move and held on for the victory.

Collet had broken away from the battle behind to retain third while Maloney managed to make his move on Edgar stick to take fourth ahead of the Briton.

Saucy ended up as the lead ART driver in sixth ahead of Crawford in P7 who fell out of title contention following the Sprint Race result. Leclerc recovered to eighth with Marti dropping to ninth after catching the gravel out of the second chicane. Martins’ recovery drive was rewarded with a point after reaching 10th on the last lap.