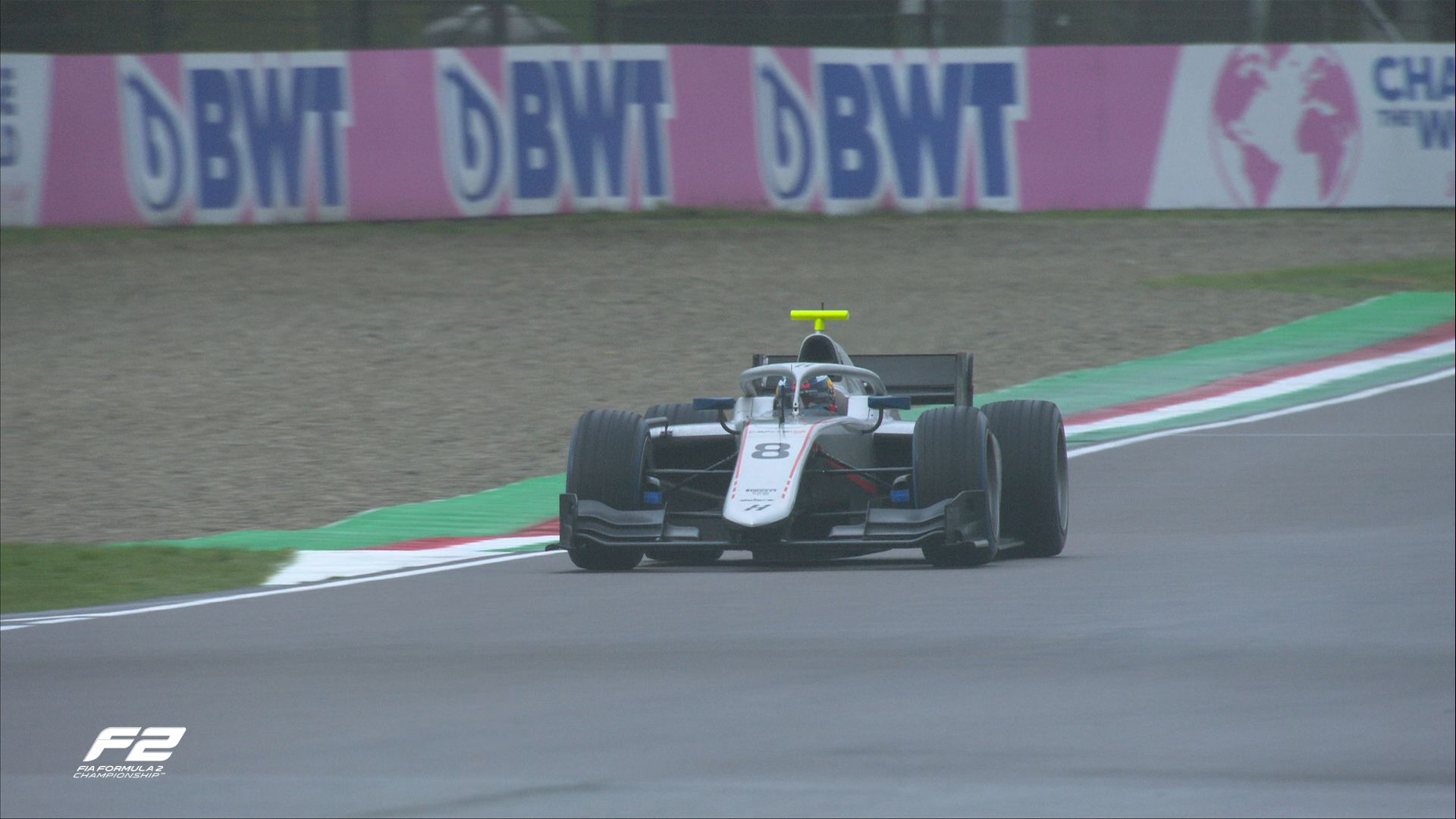 The F2 qualifying at Imola got delayed due to late ending of F1 qualifying after red flag disruptions due to wet weather conditions. The feeder series saw similar situation with first of its red flag coming out for Campos’ Olli Caldwell who went off on the gravel.

It was Hitech GP’s Juri Vips leading the way then with a 1m41.599s lap from Van Amersfoort Racing’s Jake Hughes and Campos’ Ralph Boschung in the Top 3. Everyone did manage to get a lap in before the red flag, but many couldn’t get a clean run.

With the conditions getting darker, Vips continued to lead from Hughes and Carlin’s Liam Lawson in the Top 3 with about 12 minutes remaining as Charouz pair of Enzo Fittipaldi and David Beckmann sat fourth and sixth respectively.

The order changed towards the end but Vips put in a 1m40.221s to eventually take feature F2 race pole at Imola which ended in dark as DAMS’ Ayumu Iwasa popped up to second with a 1m40.378s lap, likewise Virtuosi Racing’s Jack Doohan in third.

Campos’ Boschung was fourth from Prema’s Dennis Hauger who like Iwasa and Doohan popped up late in the day, pushing DAMS’ Roy Nissany to sixth. ART’s Theo Pourchaire had a similar step to seventh from Prema’s Jehan Daruvala, who had a late spin.

Hitech GP’s Marcus Armstrong was ninth from Carlin’s Logan Sargeant, who secured a reverse grid pole for F2 sprint race on Saturday. Charouz’s Beckmann – subbing in for Cem Bolukbasi – missed out in 11th from points leader Felipe Drugovich in 12th.

Trident’s Zane Maloney claimed his maiden Formula 3 pole position during a frantic conclusion to Qualifying at Imola on Friday. On a circuit that was rapidly drying Maloney vaulted to the front of the pecking order with a time of 1:41.180s to register a lap that would not be beaten.

After a drenched and shortened Free Practice session earlier on Friday the rain eased in time for Qualifying, albeit with Wet tyres still required for the field of 29 drivers. They were all eager to lay down a benchmark and top spot exchanged hands on multiple occasions, with purple and green sector times dominating the timesheets.

That came to a juddering halt following a clash between Enzo Trulli and Arthur Leclerc that left the PREMA Racing driver in the gravel at Rivazza 1. The incident brought out the red flags, forcing drivers to return to the pit lane, with only five minutes remaining in the session.

Once it restarted there was a frantic jostle for track position and immediately lap times tumbled due to the rapidly improving track conditions. After Isack Hadjar and Grégoire Saucy enjoyed spells at the front, it was Maloney who made sure of pole position to grab two bonus points and a clear view for Sunday’s Feature Race.

Roman Staněk slotted into second, 0.107s behind, to make it a 1-2 result for Trident on home soil. PREMA’s Jak Crawford vaulted into third place with a last-gap lap, inching just 0.001s clear of Saucy, while Oliver Bearman captured fifth, leaving Championship leader Victor Martins in sixth. Hadjar was shuffled down to seventh in the closing laps, with Carlin’s Zak O’Sullivan eight, as MP Motorsport duo Caio Collet and Kush Maini rounded out the top 10 positions.

Qualifying determined the starting order for Sunday’s Feature Race but Saturday’s Sprint Race line-up is dictated by the top 12 being reversed. That means the front-row of the grid for the Sprint Race will consist of Franco Colapinto and Ido Cohen, who qualified 12th and 11th respectively.