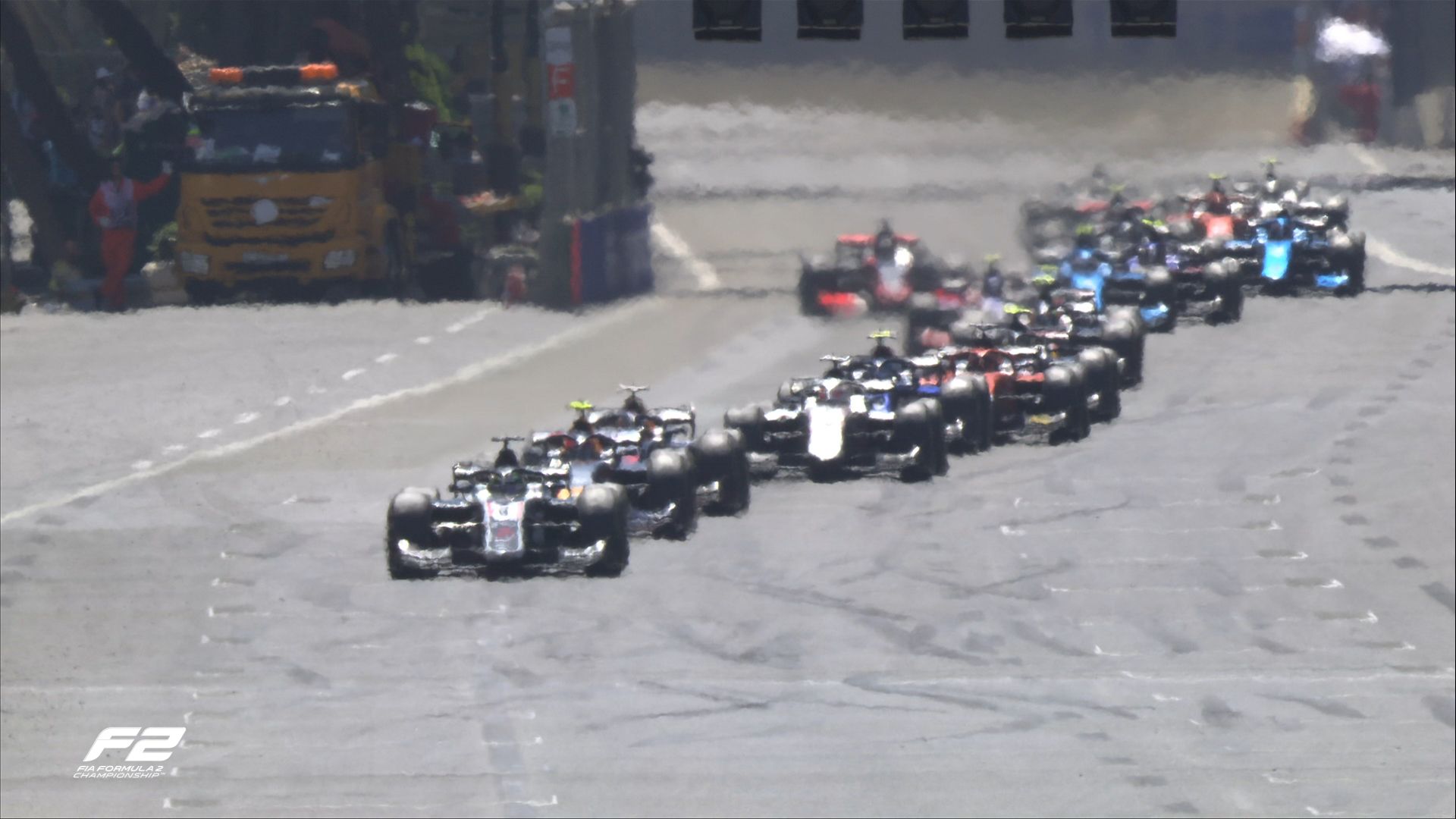 Reverse grid pole-sitter in Baku F2 sprint race Jake Hughes did not have the best of alunch in his Van Amersfoort Racing car as ART’s Frederik Vesti took the lead going into Turn 1. But a small slide at the exit allowed the British driver to get alongside him.

While Hughes was on his right, Prema’s Jehan Daruvala saw the opportunity on the left to clear him and also Hughes going into the left-hander to take the lead of the race. The Indian made up two places at one go and started to stretch his advantage.

Behind them, Virtuosi Racing’s Jack Doohan had a front wing damage after a kerb moment on Lap 1 which forced him to pit. At the same time, the stewards ruled out any investigation between MP Motorsport’s Clement Novalak and Campos’ Ralph Boschung.

At the front, Daruvala started to stretch his advantage as Vesti finally cleared Hughes for second in a bold move around the outside. Once he cleared him, the British driver eventually was cleared by most on the field to drop out of the Top 10.

Sargeant was up to third from Verschoor, Armstrong, Drugovich, Lawson and Vips in the Top 8 points position, as ART’s Theo Pourchaire and Prema’s Dennis Hauger slotted behind them in the Top 10. The fight for the last point was certainly between the three.

Pourchaire even tried a move on Vips but the Estonian held him off at Turn 1. Couple of laps later Hauger tried a bold move at the left-hander but braked hard when he realised he will not make it and crashed onto the barrier to call out the safety car.

It wiped out his teammate’s lead at the front with Daruvala under a bit of a pressure from Vesti and others at the time of the re-start. The Indian kept it late until the main straight but managed to retain the lead from Vesti with a bit of a mayhem behind.

Sargeant lost out to Verschoor and Armstrong after braking hard at Turn 1. Meanwhile, Vips lost chunk of places when Charouz’s Enzo Fittipaldi couldn’t turn at the left-hander. The Brazilian stopped on track, with the Estonian returning to the pits.

The safety car was called in again with Daruvala leading from Vesti, Verschoor, Armstrong, Sargeant, Drugovich, Lawson and Pourchaire in the Top 8 points position. The second re-start almost worked for the Indian driver but a lock-up changed the course.

Going into Turn 2, Daruvala lost his lead to Vesti as the Indian tried to fend off Verschoor and Lawson in the fight for second. The Dutchman found the barrier which resulted in a safety car as Lawson was third from Armstrong, Sargeant in the Top 5.

Drugovich was sixth from Pourchaire and DAMS’ Ayumu Iwasa in the Top 8 points position. There was a chance on the re-start but Vesti had it under control to eventually take the sprint F2 race win in Baku as Daruvala had to be content with second.

He defended hard from Lawson but was naturally dejected to lose the lead. Armstrong was fourth from Drugovich with Sargeant, Pourchaire and Iwasa rounding the points position. There was big incident at the back with Trident’s Calan Williams into the barrier.

Campos’ Boschung tagged along with him with Williams smashing into the barrier. This also caught out Charouz’s Cem Bolukbasi and Virtuosi’s Marino Sato.

#F2 #AzerbaijanGP What a crazy race. One final lap shoot out and Vesti wins the sprint race. On the final lap, there also was a huge crash between a number of drivers. #MsportXtra @BakuCityCircuit @F2Inside pic.twitter.com/DVch7xg4j4