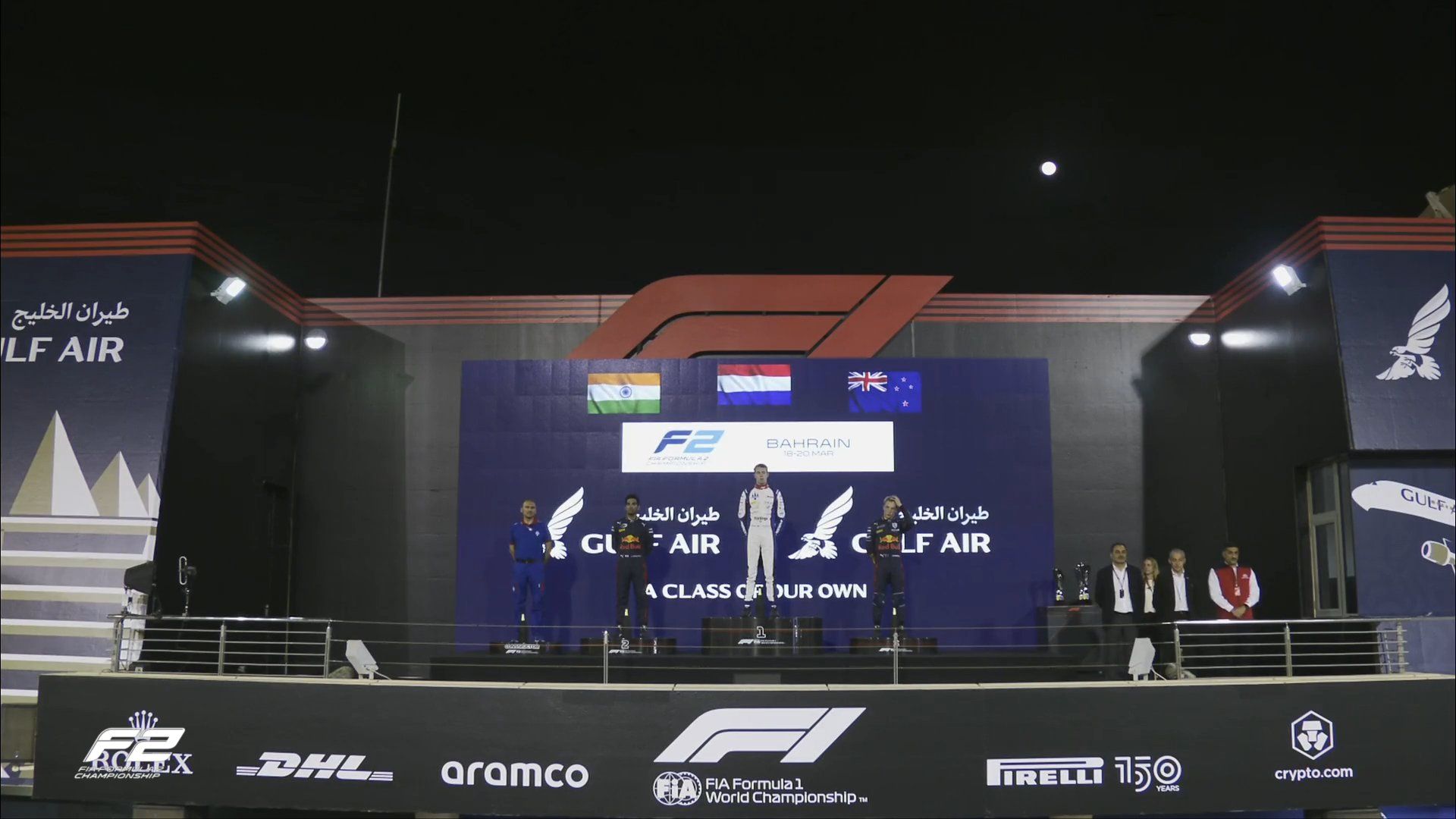 Richard Verschoor started 2022 FIA F2 season with a win in Bahrain’s sprint race, Isack Hadjar did so in F3 after penalty to Ollie Bearman.

Verschoor dominated the first F2 sprint race of the year in Bahrain, with his Trident team taking their first win in the championship’s modern iteration. Prema’s Jehan Daravula and Carlin’s Liam Lawson rounded out the podium, but neither were a match for the 21-year-old Dutchman.

He lead out of Turn 1 after pole-sitter Felipe Drugovich in MP Motorsport car suffered a slow start, wheelspinning in the first phase of the pull away which allowed several cars to pass before the first corner. Marcus Armstrong was the first retiree of the race after Van Amersfoort’s Jake Hughes tagged the New Zealander’s Hitech GP at Turn 8 when trying to finalise a move on the inside of DAMS’ Roy Nissany.

Hughes was swiftly handed a 10-second-time penalty for causing a collision. The ensuing safety car bunched the pack up and led to a chaotic restart, with Theo Pourchaire falling back and pulling into the pit lane with a mechanical problem, this was after Drugovich reported oil falling from the back of the ART Grand Prix car ahead, a notion seemingly confirmed by an onboard camera view from the MP Motorsport machine.

Elsewhere, Charouz Racing’s Enzo Fittipaldi and Virtuosi Racing’s Marino Sato fought for P13 just before Lawson understeered wide at the slow Turn 10 in front of Drugovich. This set up the Brazilian to make a daring move on Lawson at Turn 1 after the Red Bull junior locked up and ran wide. He came back on track and pushed Drugovich wide over the Turn 2 exit kerbs and took back the position.

A damaged front wing, after contact with Hughes at Turn 1, for Clement Novalak pushed the MP Motorsport driver into P19, and last place, with a 10-second-penalty cementing his woes. A Virtual Safety Car quickly followed as Hughes stopped by the side of the track, with Daruvala making a crucial move on Boschung moments beforehand.

But the Swiss racer came back on Daruvala post VSC re-start and retook second. The Indian, however, was able to re-pass on the following lap but this allowed Verschoor to stretch his advantage. Lawson and Boschung the fought hammer and tongs in each other’s DRS down the pit straight, with the Swiss driver’s worn tyres rendering him unable to hang on in the end.

A yellow flag in the closing moments was caused by the Campos of Olli Caldwell stopping by the side of the circuit, but nothing could topple the dominant drive from Verschoor who eased into to win the 2022 opening encounter from Daruvala and Lawson. Behind the podium sitters was Boschung who took the fourth spot, Drugovich in P5, followed by Carlin’s Logan Sargeant and Hitech Grand Prix’s Juri Vips.

Sargeant had pace towards the end to pass Vips. DAMS’ Ayumu Iwasa took an impressive P8 with Dennis Hauger for Prema, and the Virtuosi entry of Jack Doohan rounding out the top ten. The Japanese scored the last point, gaining 14 places to eighth after starting from 22nd due to early F2 qualifying exit.

As the red lights disappeared to signal the start of the race, O’Sullivan was forced to defend from Bearman on the run into the first corner. The duo came close to making contact, however both avoided a coming together.

Further back in the pack, however, others were not so lucky. Roman Staněk and Qualifying pace-setter Franco Colapinto collided, and both were forced to return to the pit lane for repairs, which all but eliminated them from contention.

Arthur Leclerc, who was one of the biggest movers in the race, found himself up in ninth following the opening handful of laps after starting from 13th, winning battles with Grégoire Saucy and Caio Collet.

Saucy’s race would soon come undone, after he and ART Grand Prix team-mate Victor Martins collided at Turn 1. While battling for eighth place, both drivers sustained damage and returned to the pitlane, but both were forced to retire.

Moments after the team-mates came together, up front, Bearman made his overtake on O’Sullivan stick through Turn 4 and was released into the lead. Bearman’s team-mate Leclerc continued his charge behind, progressing into seventh with an overtake on David Vidales. Soon, the Monegasque driver would pass the sole remaining ART of Correa, allowing him to set his sights on a top five finish.

On lap 10, Hadjar progressed into third place past Smolyar, before the two hunted down Zane Maloney in third. However, Maloney had moves of his own to make. As O’Sullivan’s pace began to drop, he fell into the clutches of the following pack, with Maloney and Hadjar swiftly moving past the Williams Formula 1 academy driver.

As Hadjar then overtook Maloney for second, Smolyar put O’Sullivan in his rear mirrors, and was soon ahead of Maloney for third, demoting the Barbadian driver to fourth place. Leclerc, now running in fifth after also moving past O’Sullivan, closed right up to the back of Maloney on the final lap.

The duo battled for position and took part in a drag race to the finish line, but it was Maloney who managed to keep his nose in front to secure fourth, as well as the extra point for the fastest lap. Leclerc was fifth, with pole-sitter O’Sullivan dropping to sixth.

Collet was seventh for MP Motorsport, while American Kaylen Frederick was eighth. As the sole ART car left in the field, Correa was ninth following a late battle with Frederick, while Campos Racing’s Vidales rounded out the top ten. 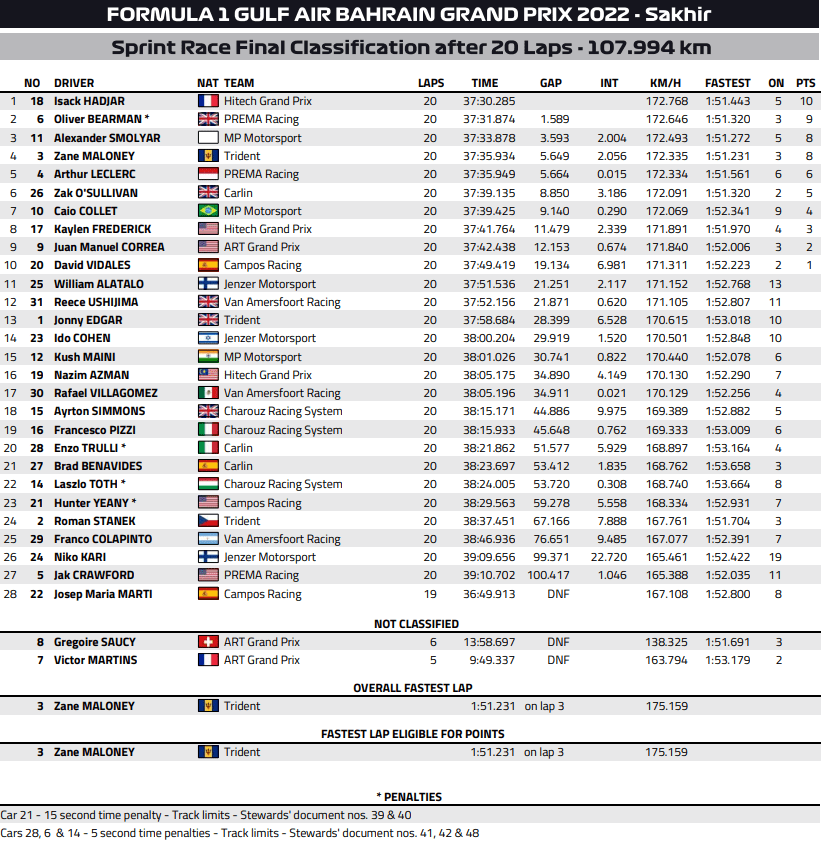