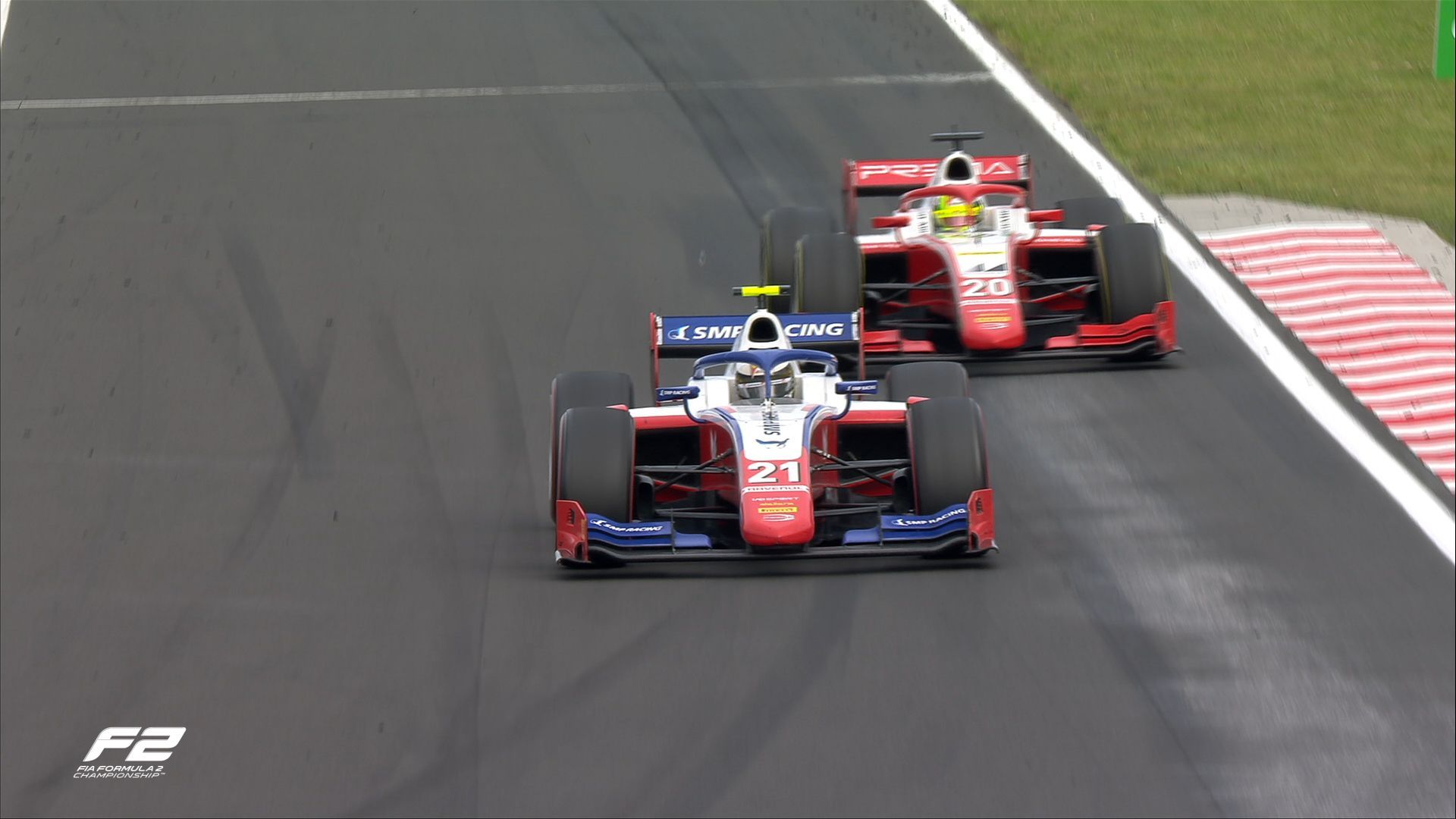 It was a scrappy start to feature F2 race as pole-sitter UNI-Virtuosi Racing’s Ilott led the way from DAMS’ Dan Ticktum despite the fight put on by the latter as Prema’s Mick Schumacher slotted in third, with Hitech GP’s Luca Ghiotto dropping down.

Things went awry then when the first safety car was deployed for the incident between Trident’s Roy Nissany and Marino Sato. The Israeli braked hard from long way into Turn 1 and hit his teammate as both retired and also put under investigation.

Moments after the re-start, Ghiotto and Lundgaard came together when the former moved slightly across his right which caught out the latter as he suffered a front-left puncture. As he tried to carry on, Armstrong hit him and collected HWA Racelab’s Artem Markelov.

The safety car was deployed as the re-start saw multiple drivers pitting. The net lead, though, was maintained by Ilott despite Schumacher having taken it for a brief moment. The German had track position over Ticktum to be second.

The Brit even lost out to Ghiotto, who was cleared of any implications by the stewards after he was put under investigation for the incident with Lundgaard. The Dane was forced to retire due to gearbox issue with teammate also out already.

The fight for the lead intensified as Schumacher caught up Ilott and passed him as the Brit came under pressure from Ghiotto even. Also, in the struggle list was Ticktum who dropped quickly to the lower half of the Top 10 as teammate Gelael was forced to pit twice.

The strategy, meanwhile, for Shwartzman worked as a late stop allowed the Russian to be fifth and on fresher tyres with teammate Schumacher leading from Ilott and Ghiotto. The Prema racer wasted no time and was already upto second behind his teammate.

Shwartzman then made a quick work of Schumacher to take the lead in the feature F2 race as Ghiotto got past Ilott to third. Behind, the other two late-stoppers Hitech GP’s Nikita Mazepin and Carlin’s Jehan Daruvala made up places too – the Indian had a poor getaway after his clutch did not work as it kept slipping and he dropped to last.

Mazepin stopped later than Daruvala and was right on the tail of his teammate for the final spot on the podium and made the move stick as the Indian got upto fifth with MP Motorsport’s Felipe Drugovich was right behind up on the soft compound as well.

Up front, Shwartzman made it look easy to score his second F2 victory by 15.5s over Mazepin, who passed Schumacher for his maiden podium as the German scored his first of the 2020 season. Ghiotto hung on to fourth to make 2-5 for Hitech GP.

Drugovich went quicker than Daruvala in the end on slightly fresher tyres to be fifth as the Indian registered best result in F2 as Deletraz cleared both Ilott and Zhou to be seventh, with the Brit to start from pole again in Sunday’s race.

The weather condition at Hungaroring was tricky for the F3 drivers to start the feature race as pole-sitter ART’s Aleksandr Smolyar was pushed off the road at Turn 1 by a spinning Prema’s Logan Sargeant. There was another spinning driver behind.

Jenzer’s Calam Williams spun across to hit Prema’s Oscar Piastri, who managed to continue, but teammate Frederik Vesti suffered too much damage. Charouz’s Roman Stanek got caught out in the melee too as safety car was deployed.

All of this allowed ART’s Pourchaire to take the lead with Piastri coming through to second from Sargeant and Hitech GP’s Liam Lawson. The American and Kiwi went wheel-to-wheel until the latter retired with fire on the back of his car, leaking oil on the track.

The F3 race was red-flagged as a result as the re-start saw Pourchaire held on to his lead and eventually score his first feature race win to make it a back-to-back victory. Piastri held on to second while Sargeant rounded out the podium positions.

MP Motorpsort’s Bent Viscaal made the most of the dramas and penalties to be fourth as teammate Richard Verschoor ended up close behind. ART’s Sebastian Fernandez slotted in sixth with Campos’ Alexander Peroni making up places to be seventh.

Hitech GP’s Dennis Hauger scored his first points in F3 in eighth as Carlin’s Clement Novalak made up 19 places to be ninth, while Trident’s David Beckmann rounded out the Top 10 and secure the reverse grid pole for sprint race.

UPDATE: Sargeant was handed a five seconds penalty for his move on Lawson. As a result he dropped from third to sixth which helps Viscaal to third as the Dutchman scores his first podium. It helps Verschoor to fourth and Fernandez to fifth.

UPDATE 2: On F2 side, Nissany has been handed a grid drop penalty for his incident with Sato and as a result, he will start from last. At the same time, in F3, Jack Doohan will also start from the back after his clash with Lirim Zendelli.